For Masters swimmers, January is One-Hour Swim month. If you haven’t yet done The Hour, here’s some inspiration — as well as information on how to get started.

Last Saturday, I joined fellow Masters swimmer John Dolan to do the One-Hour Swim, an annual "postal" event sponsored by United States Masters Swimming (USMS). The idea is to swim as far as you can in exactly 60 minutes — and you have to do the swim during the month of January. Each swimmer has an official verifier to count laps and record cumulative splits every 50 yards. You mail in your splits and yardage to a national data center (that’s why it’s called a postal event), and they rank all participants according to gender and 5-year age groups. 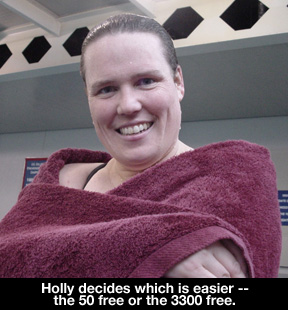 For many swimmers, the One-Hour Swim is a winter rite of passage — a way to check your personal fitness level and training regimen. It’s also a great way to see how you compare with Masters swimmers from all across the country. They have National Age-Group Records for this event, and they are mind-boggling. A few examples:
Men 25-29: 6115 by Daniel Veatch (I think that’s the most swum by ANYONE of any age)
Men 40-44: 5775 by Jeff Erwin
Men 45-49: 5500 by Sandy Macdonald

My top yardage in four annual attempts at the One Hour Swim (OHS) is 3800. It’s nothing to brag about in an age group where 5130 is the National Record (set by Laura Val in 2005). But like many Masters swimmers, I consider it a victory if my yardage stays the same or improves slightly each year. John actually had a big improvement this year, to 4230 yards. 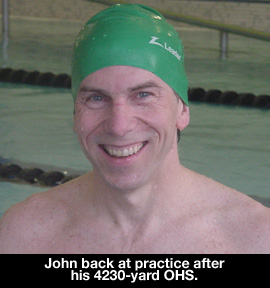 The trick to the OHS is getting to the starting line. This do-it-on-your-own and do-it-in-January format invites procrastination. Too much wiggle room. On January 1st, the whole idea sounded GREAT. I knew 6 other swimmers who were contemplating the swim, and we kept saying" NEXT week we’ll get it together."    The NEXT weeks came and went. We all developed a case of the Too Flu. Too tired. Too busy. Too sore from skiing. The water in our pool is too warm. Everyone is too busy to time for me. It’s too crowded during practice to get your own lane.

By mid January, only one of us (Holly Fisher) had done the swim. She had tried to opt out by pleading out-of-town travel plans, so as her coach I sprang it on her one morning at practice, just before she left town. Holly had 2 minutes to think about it, then GO! The surprise element seemed to work. She swam 3305 yards at an amazingly steady pace and stroke count, with technique that never faltered. It was farther and longer than she had ever swum before, and the look of accomplishment on her face was something every coach longs to see. She had surprised herself. This will set her up mentally and physically for a great triathlon season this year.

For me, I admit it was John who got me to the starting line. I would have wiggled out, but he used the commitment tactic. He made me commit to a date and time, he found a timer (his wife, Julie), and then I had no choice. If they were going to show up, there was no way I wouldn’t show up.

The OHS is a seasonal rite of passage. It provides a stark, one-number report card on your fitness level and training. But it does something beyond that. In a wonderful book called Staying With It, essayist John Jerome describes swimming the 1650 as "a very private trip… an introspective journey through your own physical state." The OHS is exactly that. 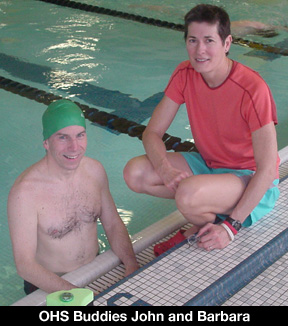 In the OHS, you have to parse out and manage your physical resources for 60 non-stop minutes. It’s as if your body was a plane full of fuel and you’re the pilot who has to manage the controls to fly as far and as fast as possible to a safe landing. As the pilot, you have to know how long you can maintain a certain pace at a certain speed. If you haven’t learned how to work the controls in practice, the secret won’t be revealed to you as fatigue sets in at the half-hour mark.

The OHS also shines a Halogen beam on your internal mental state. As Jerome says, "The first surprise in racing a 1650 — always, every time — is how quick and hard the fatigue comes on. You think you know about fatigue from training, but this is different (and it can be a little frightening). The second surprise is that you can swim anyway."

The great thing about the OHS is that it gives you a chance to surprise yourself. It’s just long enough and challenging enough to give you a chance to push yourself to the limit, and to hang in there, mentally and physically. It gives your brain a reason to climb the wall — and a chance to get back in and finish the job. This can be a HUGE confidence builder. The OHS makes it inevitable that you will encounter physical and mental overload and stress. But in six years of watching swimmers do the OHS and in doing it myself, I have not once seen a swimmer lose it, mentally. Instead, at the end, I have seen swimmers who look exhausted, yes, but also confident, proud, and ecstatic.

Now get a buddy, get signed up, and Go Swim!