Sooner or later, if you really want to reach the top, you’ll run into a very common problem: There’s no one to race. You’ll show up at a local meet, or everyday practice, and have to do it all by yourself. 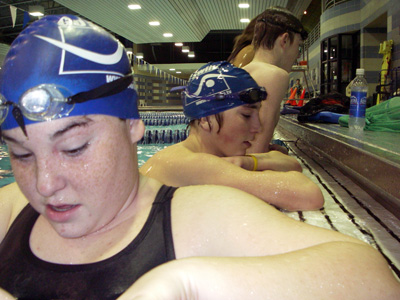 When this happens, you have to sit back for a second and ask, "who does Michael Phelps race in practice?" Now, I know he swims with some REALLY studly guys, so chances are really good that he has a LOT of races every day in practice, but imagine Phelps on YOUR team, and ask the same question. While it’s always better to have someone push you on a daily basis, what do you do if you simply don’t have that situation?

There are VERY few young competitive swimmers who train solely on their own, so I’ll assume even the fastest swimmers are going to have SOMEONE else in the pool with them. Here are just some ideas for anyone who’s looking to help an already fast swimmer get faster.

Variations on Strokes
Not every fast swimmer specializes in freestyle, which means there will be plenty of other swimmers on the team who can step up NEXT to the fast kid, and race him or her in their specialty. Take a really good senior breaststroker, for example. You can go down to the group below, and grab a kid doing freestyle at about the same speed to create a race situation. Look for people with "like times," not just "like abilities." Create races among training groups, which also builds team unity. It also will teach the younger swimmers how to race as well. Remember, a race doesn’t have to be a 25 or 50, it can be for an entire set. Keep score of how many reps one swimmer wins over the other.

Toys!
Fins are great for this. The goal of all of these is to allow slower swimmers to speed up and race the fast kid. Sticking fins on someone can make her faster and challenges both parties to increase the speed. Don’t worry about making it always really fair either. If the fast kid is used to winning all the time at everything, overload her system a bit. Make it REALLY tough to keep up and see if she moves up ANOTHER level.

Relays
Why not? How many meets have you been to — country club, summer league, or a more intermediate level — and seen the top swimmers post times that would challenge or beat some of the relays? Why not create that same opportunity within a practice? Let the "fast kid" have to step up to race against a group of younger swimmers. The young kids sprinting can usually throw together a GREAT pace for a 200- , 400- , or 800-yard swim. Making these races part of an entire set gets the fast kid great base, or endurance work, while also giving the younger, or slower swimmers the chance to work on SPEED…and a bunch of it. 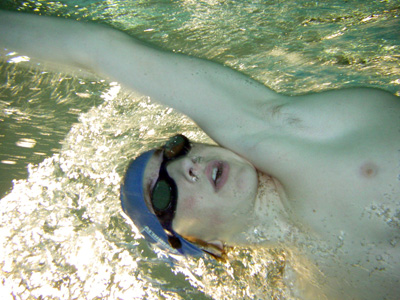 Lapping
With SO many swimmers in the pool, the fast swimmer should always have a "target." In just about any set, there will be people in the next lanes who are either leaving with, or slightly behind the fast kid. The fast kid has to learn how to keep his eyes open, and has to always look for a challenge or race. That race may actually come from someone leaving way before the fast kid gets back to the wall. It can be the person who left at the same time in the next lane. The idea is to LAP the other swimmers. My son and I play a video game called Project Gotham. It’s a racing game for the xBox. In one of the games, the goal is to start way behind, and you have to pass a certain number of cars to gain your Kudos. This swimming game is the same thing. When you have 3 to 6 kids in a lane, it gives the fast swimmers the opportunity to catch, pass, and move on to the next one. They don’t even have to be in the same lane, but can be in lanes around them. There should NEVER be a lack of targets…that is…if the fast kid cares.

Head Games
Part of being the fastest swimmer, is that you have to make up games in your head. Breaking records is always a fun game, but how do you break records in practice? One trick is to pick out either the age-group records, national records, or world records for your goal events, and shoot for them in practice. HUH? Here’s the trick. Pick the records for the long-course, or meters, and try to beat them in yards. It may sound easy, but it’s not. I used to play that game when I was in college, and it’s very tough. Back then, the world record for the 200 breast was 2:15. Go ahead, try to repeat 2:15s through an entire set of 200s breast. Or go for the 100, which was 1:02 back then. It’s just not so easy. Now move those records to todays standards, 2:09 and :59. Now THOSE are some GOOD REPEATS! I’m sure more than one young breaststroker is now saying… thanks a LOT Brendan…SHEESH!

OK, those are just a few ideas, and I’m sure there are a TON more. If you have an idea for creating competition, please add it to the COMMENT section below! The reality is that the fastest swimmers won’t always have anyone to race against. Heck, they’d better get used to it, cause if they REALLY accomplish their goals, they may not EVER have anyone to race…winning everything in sight…all the way to the top. The reality is also that those swimmers, or their coaches, will have to create an environment RICH with opportunities to race, and continue to move up to the next level. This will take some creativity, and ALWAYS the desire on the swimmer’s part to SEARCH for races, and opportunities to go faster. Use your teammates, and build a stronger, more cohesive team. Can you just picture the fast kid on your team, thanking the age-group swimmers for their help in the victory? Talk about selling the sport forward. Those kids will NEVER forget that.