We’ve all heard about the importance of setting goals, but goal-setting can seem like an impossible — even scary — task when you are in unfamiliar territory. This is especially true if you are a newbie Masters swimmer and you don’t have a CLUE as to what would be a worthy or realistic goal. One trick is to set a goal as a group or as a team. This worked for my team in a big way. 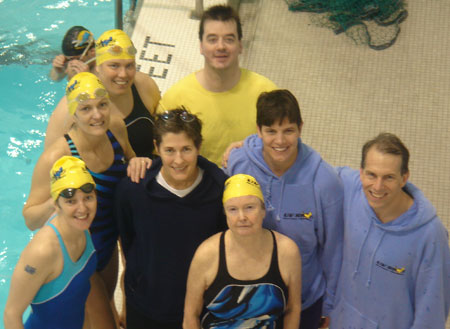 Three Januarys ago, I had an opportunity to start a Masters swim team at a community pool in Lebanon, New Hampshire. We started with about 25 swimmers, most of whom swam for fitness, or to be able to survive the first leg of a triathlon. Not one of them swam competitively as a Masters swimmer, and when I suggested that one day they might test themselves in a swim meet, I got blank stares and the usual comments. "I could NEVER be fast enough to compete." "There’s NO WAY I could dive off the blocks."  "I’d be totally embarrassed to swim in front of an audience."

Well, it has taken three years, but two weekends ago, we sent a small but mighty group of nine swimmers to the New England Masters SCY Swimming Championships. How did this happen? First, two or three of the more experienced swimmers signed up for the meet. Then we started talking it up, and we focused on the team aspect. Could we score enough points to break into the top ten of all other New England workout groups? Could we recruit enough swimmers to have two relays in each relay event? What if each of us swam the maximum number of events each day — and entered events like the 200 fly, 400 IM, and 500 free, just to get points? People started to think Top Ten, and started to think maybe we COULD make it happen. We got a few more to enlist. Then we started talking up the Road Trip aspect. One of the great things about Masters swimming is the chance to travel with your buddies, swim hard all day, and then have some fun together at local restaurants. More signups.

When we arrived at Harvardï¿½s Blodgett pool, we were dismayed to find that we were already 504 points out of first place because we had failed to send swimmers to the distance events (1650 and 1000) contested on the previous weekend. Undaunted, we readjusted our team goal to see if we could place in the top twenty teams. And then for the next three days we swam event after event, checking constantly to see how we were doing as a team, and gradually moving up the ranks from 33rd to 24th, 22nd, and finally to 13th place out of 40 other New England teams. We were happy with our performance, considering that all the teams ahead of us had anywhere from 14 to 93 swimmers helping to score points.

What was great was that our nine swimmers had set a goal without even realizing it. The goal was the meet itself — and our performance as a team. Once we had targeted this particular meet, and had set a top-ten finish as our goal, the rest fell into place. Swimmers who had never DREAMED of stepping to the blocks to compete, did just that and discovered they could handle the pressure. And that they loved the excitement and adrenaline rush. They also realized that having a goal –especially a team goal — had a positive effect on their training. In the days and weeks preceding the meet, they became extremely focused and dedicated in their training, pushing each other to swim faster, and paying close attention to technique and to the specific rules for turns and strokes. They had a REASON to train hard and to push themselves.

When they returned after the meet, these nine swimmers were so enthusiastic that they have pulled others into the goal. We are determined to break into the magic Top Ten next year, by sending more swimmers to the regular meet, and by sending our triathletes to score points in the distance events. We’ve taken a once-scary concept (competing in a Masters swim meet) and made it into a fun and achievable goal. Go team! Go Swim!

For a listing of all the Masters swim meets in your area, visit www.usms.org and click EVENTS.