In a swimming race, there are many subtle changes in momentum in relation to the swimmer next to you. In a freestyle race, for instance, if you’re breathing to the side of your nearest competitor, you’ll notice changes in momentum from one breath to the next. Sometimes the competitor will be gaining on you; other times she’ll be falling back. These shifts in momentum can affect your mental state and your physical state — and can affect them in either direction, depending on how you respond to the shift. In order to deal with these momentum shifts, a swimmer needs poise, experience, and knowledge. With the right tools, you can recover and even take advantage of the situation. 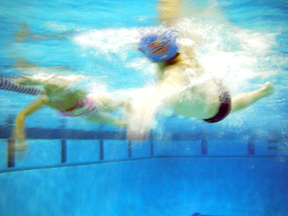 First, let’s imagine that your competitor is leaving you behind. You’re breathing to the side of the competitor, and you notice that he’s made his move. Your first instinct is to REACT — to start sprinting to keep from being left in the dust (wake, as it may be). The problem is this: Changing momentum in the middle of a length is very tough. It takes a physical toll. (Think how much gasoline it takes to accelerate your car from 10 to 60 mph in 3 seconds.) If you react too quickly, there’s a chance that your panic will cause you to spin, or slip in your stroke, and you’ll only end up working harder and getting no where. Combine the physical toll with the mental PAIN that comes when you realize someone is beating you. As you panic, there is a natural human instinct to FEAR PAIN… and as you fear it, any little bit becomes MORE and MORE evident… and creates MORE PAIN. It’s REALLY tough to pick up the pace if everything you do HURTS that bad.

A smarter plan might be this: If it’s a short-course race, and depending on when you notice a shift in momentum, you could accept that a move has been made, continue with the momentum you’ve set, but immediately start planning for the next turn. Build from the shift point into the wall, and then EXPLODE off the wall, using the extra momentum and speed to work yourself back into the race. This move could actually give you the advantage because you’ll be gaining momentum on your compeition and, as you creep up, he’ll be the one hurting and wondering if he made his move too soon. It’s more difficult to pull yourself ahead if this is the final turn, but it still might work. Likewise, if you’re the one pulling ahead at mid pool, be prepared to fend off a shift change after the next turn.

If it’s a long-course race, and your competition has made a move, you won’t have nearly enough time to wait until you get to the next wall. What’s a smart counter-move? There are at least two ways to react, and neither involves PANIC. You must mentally accept that the gauntlet has been thrown down, and that you’re going to recover as quickly as possible.

First, you can actually shorten your stroke just a bit. This trick can help to increase your turnover slightly. Once that’s done, start to lengthen again, stroke by stroke, until you’re back to full strokes and full range of motion. This allows you to increase your momentum and speed over a few strokes, and will help you maintain a more correct stroke, rather than the panic and spin method. 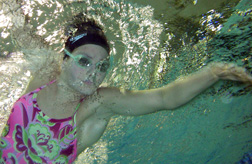 Another option is the exact opposite. Increase the connection, or power, in EACH stroke… but not on the first stroke. Increase power over the next few strokes. Remember, the instinct is to panic… Think through that, and don’t let someone win the race just because she moved first. Be smart and build to the point where she’s no longer pulling away. Counter-moves don’t usually happen in one stroke. Understand that, and work with it. Switch the momentum back to your side over a few strokes, not one stroke.

Finally, MOVE OVER. While it’s generally not efficient to move from side to side in the lane DURING the swim, there are certain times when a lateral move can give you a bit of a a drafting effect on a competitor who is ahead of you in the next lane. This "connection" is more than just trying to catch their wake. It’s also about getting in their face, and being better able to sense the momentum changes that are occuring.

Again, if you’re the person who’s being left, the most important thing to do is NOT PANIC. Get the momentum back to your side as quickly as you can, but in a planned fashion.

Now, if you’re the one making the move… The BEST place to surprise your competition is into, and out of, the walls. Try to build speed on those last few strokes that set up the turn. Your spin on the wall should be tight, and as fast as possible. You know how much air you need going in…to have a great pull down or underwater dolphin or no-breath breakout…coming out. And most important, you are COMMITTED to making this move stick. Your goal is to BREAK your competitor’s spirit, and make him or her panic. 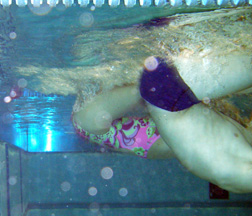 If you’re going to make your move early in a race, make sure you MOVE AWAY from your competitor. Don’t help her by allowing her to connect, or draft off you. You’ll want to make your competitors think that you don’t even know they’re there. You’ve left them, and are now on to bigger and better things. Also, if you’re going to make your move early, and you’re really committed to making it stick, it’s going to take a lot of effort. There is always the chance that you’ve gone a bit TOO early, and given them JUST enough time to recover. This is when you sometimes just close your eyes and search for water to grab on to. You’ve created great momentum, and now it’s your job to hold on to it. You’ll be in tremendous pain, and if you see them creeping up on YOU… then there’s always a chance that YOU’LL panic. I’m not saying close your eyes, it’s still racing, and you want to make sure you know what they’re doing… just don’t focus so much on them that you forget YOUR job: FINISHING STRONG!

Finally, if you’re a distance swimmer, and you’ve gotten yourself WAY behind, it’s easy to give up mentally and to stop caring about where you are in relation to other swimmers. Don’t give up! You can recover or hold your own, but you need another set of reference points. Chop up the pool into bite-size chunks. Use the flags, the crosses, and other pool markings as reference points. Mark where you pass your competitor, and try to hold your own or slowly move that mark back just a bit on every length. Feel the pain that you have, and understand your competitor is feeling it, too. Because of that, work the spots where you instintively feel yourself relax (because chances are that’s where your competitor is relaxing… feeling all good out there way ahead), and ATTACK those spots. Usually, this means you need to hit the turns. Even if you swim the same speed as your competitor, you can make BIG momentum shifts by attacking the turns.

In summary… don’t panic when someone starts to pull ahead of you. Accept that it’s their goal to beat you, and that they’re just trying to accomplish that goal. Now, gather your composure, develop a quick plan, and get back in the race.