← It’s All About Rhythm

“I needed only one.”
–Glenn Mills

There’s a story that Glenn Mills likes to tell, and that I never tire of hearing. It’s a true story about something very ordinary — two quarters — that produced something very extra-ordinary. Glenn is way too modest when he tells this story, and leaves out a lot of things about himself, so he has graciously allowed me to tell the full version. I hope it inspires you. 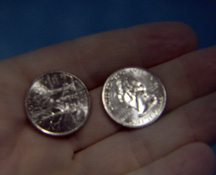 In 1980, Glenn was one of the fastest breaststrokers in the world (that’s one of the small details he leaves out, by the way). Glenn was so fast, in fact, that in 1980 he won Olympic Trials in the 200 breast. But he had to watch the Olympics on TV because that was the year the USA boycotted the Games. Glenn kept swimming, but hit a slump in 1982 when, according to Glenn, he didn’t train hard enough and wasn’t focused — either in school or in the pool. The low point of 1982 was when he failed to make finals at NCAAs — the only time in his senior career that he failed to make a championship final.

In 1983, Glenn decided to turn things around. That’s where the two quarters come in. Each day, Glenn would take two quarters with him to practice. During warmup, when he still had lots of energy and air, he would do a breaststroke pullout at each end of the 25-yard pool, and drop a quarter at the point where his hands broke the surface. “I made a promise to myself,” says Glenn, “that no matter what kind of interval I was swimming and no matter how bad my lungs were hurting, I would NOT come out of my pullout before I got to the quarter.

At the beginning of the season, Glenn needed two quarters for this exercise in mental and physical toughness. “But,” says Glenn, “by the middle of the season, I needed only one.”

It’s no surprise that Glenn found himself behind the blocks for the finals of the 1983 NCAA 200 breast. “It was one of the strangest experiences of my career,” he says. “I knew I had prepared well. And I was so confident of what was about to happen that I couldn’t WAIT to get in the pool. Long story short, I won the race, and accomplished one of my goals — becoming an NCAA Champ.”

The story of the Two Quarters illustrates how powerful the LITTLE THINGS can be in building a successful season. And it shows the value of small challenges. Glenn set up a small game for himself, but he was deadly serious in having the discipline to WIN that small game. He won it over and over again — on every length of breaststroke, on every day of practice. By the end of the season, he knew he had the discipline and the training to win the big game. 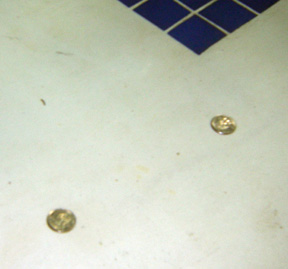 What two quarters do YOU bring to the pool? No matter how old you are or how fast, there are always small challenges you can set for yourself . There are always little things you can hold yourself to that will slowly but surely make you a faster swimmer, and that will give you a mental and physical edge when you step to the blocks. Here are just a few ideas to get you started.

Breast and Fly: Do a legal, two-handed touch no matter what — even when you’re wearing equipment such as paddles, pull buoy, or fins.

Breast and Fly: Whenever you wear fins, take a minimum of 4 streamlined body dolphins off each wall, no matter what kind of interval or set you’re doing.

Fly: Don’t breathe on the first stroke — no matter what!

Freestyle: No breath until after the first stroke — no matter what!

Backstroke: Don’t start swimming until your feet clear the flags.

Backstroke: Never bail out of doing a legal flip turn — no matter how close or far away from the wall you are when you go to your stomach. And no matter how crowded your lane is.

All Strokes: Hands in tight streamline on every pushoff.

All Strokes: Always have a focus! Glenn’s current focus is to think about how and where he’s hooking in and connecting to the water — on every stroke.

Ins & Outs: Always be the first one in (a Dave Denniston tip) and never let your rear end touch the deck as you get out of the pool.

Don’t just do what your coach asks you to do — always do just a little bit more.

← It’s All About Rhythm