Wanna hear something cool? I’ve been working with some of the best swimmers in the world… on the weekends… teaching and hanging out. Being a FAN of the sport, I can’t think of a better way to spend a weekend — having an opportunity to learn exactly what these champions do, and being inspired by their athleticism and dedication to swimming. 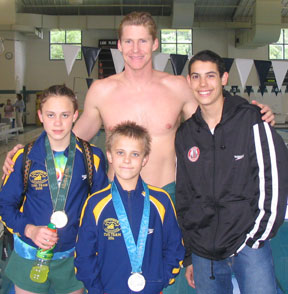 The past couple months, I’ve been able to work alongside Josh Davis, Brendan Hansen, and Aaron Peirsol at some Ultimate Technique Train with the Champ Camps. While my job is pretty straightforward — videotape every camper and do a short evaluation on each one — I’ve been able to spend enough time with these guys to really learn not only what they’re like as swimmers, but also as people.

When it comes to these guys, the word "committed" is an understatement. Brendan and Aaron have a work ethic that is beyond tremendous. They spend a lot of hours in the pool. But what’s truly amazing is the level of FOCUS they sustain during all those laps. In talking with them about this, it confirmed the message that we try to get across on the website and in our videos: As a swimmer, you need to take responsibility for what you do, how you do it, and why you do it. And you need to search constantly for ways to do it all better. These guys can tell you everything they’ve tried or experimented with. They can tell you what’s worked, what hasn’t, why it hasn’t, and why what they do at THIS point in their career is the BEST that they can be doing. Focus is so important to Brendan, Josh, and Aaron that they try as hard as they can to get this message across to swimmers.

They also are committed to teaching. Anyone who thinks these camps are simply about meeting Olympians is mistaken. The teaching aspect is taking as seriously as at any camp I’ve been involved in, and that’s been a lot of camps. And I noticed that when the teaching comes from two guys who hold FIVE current World Records (two each and one shared for the 400 Medley Relay in Athens), kids listen. 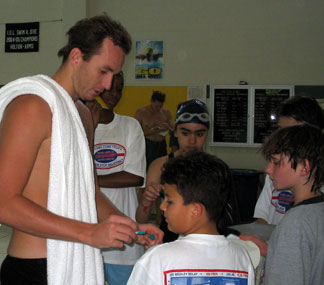 Josh Davis, who held numerous American Records and has three Olympic gold medals, is the senior member of the Ultimate Technique traveling crew (until I came aboard… age wise that is). Josh is passionate about working with kids. His smile is contagious, his enthusiasm for the kids is tremendous, and you walk away from spending a weekend with this guy feeling like you could take on the world. His ability to still hop into the pool and race anyone (including Aaron and Brendan) shows what great technique, and taking care of your body can do for your longevity in this sport. Watch out for Josh. If he decides to swim competitively again, he will be a threat on the world level. He can still MOVE!

These Ultimate Technique Champ Camps always seem to end up with people RACING. The champs love to race, and the kids love testing themselves against the world record holders. Being an older, more mellow (and out of shape) guy, I kind of expected these races to turn into fun shows… with the Olympians cruising down the pool, making the kids feel good. WRONG! They respect the other swimmers enough to RACE HARD. Granted, they give the kids a significant head start, but I have yet to see the champs cruise just to make someone feel good. They’re honest about what they do, and if you can’t beat them with the head start, then you know just how much work you’ve got ahead of you.

During the training session at one camp, I found myself as the on-deck coach, while Josh and Brendan were swimming the sets with the kids. I ran to one of the swimmers next to Brendan and said, "When are you going to have the world record holder in the next lane again? GO GET HIM."The swimmer turned it on full blast, but Brendan showed no mercy and proceeded to cruise a 100 IM in :57. 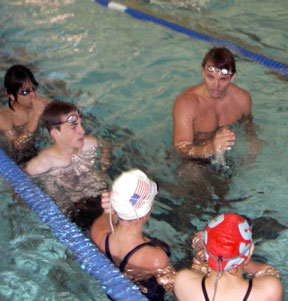 At another camp, I secretly clocked Aaron as he demonstrated a two-turn 50, starting at the middle of the pool while the kids lined the sides. I started my watch as he passed the midline. He effortlessly went into and out of the wall… did his dolphins, swam to the other end… repeated the turn, and came back past the centerline. The swimmers were focusing on HOW Aaron performed his turns, dolphins, and breakouts. When I asked them what they thought Aaron’s time was, the guesses were anywhere from :40 to :30. It was :26.

These guys exude class, knowledge, sportsmanship, and caring for the kids they work with. They respect the swimmers enough to be honest about the workload ahead, and share stories about what it was like to work their way up through the ranks to become the swimmers they once idolized as kids. 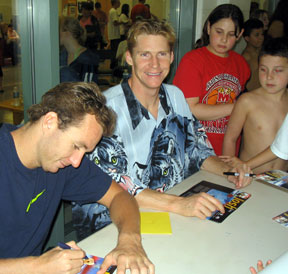 Again, as a fan of the sport, I feel very fortunate to work with the BEST. While this may sound like a sell job, I honestly think these camps offer the best combination of technique, motivation, and feedback (with the video feedback part). If your team is thinking of doing something like this, it’s tough to match the impact of having GREAT athletes come in to influence your swimmers.

Thanks to Josh and Ultimate Technique Camps for including me in their program. Although it’s meant more travel, the opportunity to learn, teach, and provide video feedback can only help to make me a better teacher and coach in the long run… plus it’s been a LOT of fun. 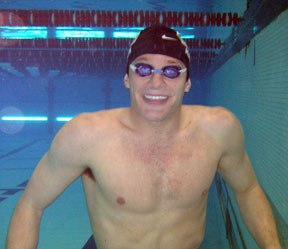