On Sunday, June 11th, six swimming buddies from my hometown of Wooster, Ohio, took on the challenge of the Great Chesapeake Bay Swim. They filed four very soggy postcards, but the smiles came through just fine…. 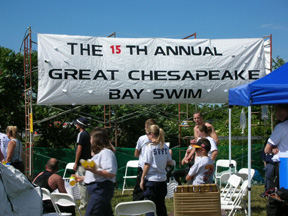 What is the Great Chesapeake Bay Swim? What follows is a little history and info from the official race website. (All photos courtesy Jeff Smith.)

The Great Chesapeake Bay Swim (GCBS) is one of America’s premier open-water swim challenges. Begun in 1992, the annual event is scheduled for the second Sunday of June and consists of a 4.4-mile swim across Maryland’s Chesapeake Bay. (This year they added a 1-mile swim.) The race starts from the shores of Sandy Point State Park, about 5 miles northeast of Annapolis. The course extends eastward between the two spans of the William Preston Lane, Jr., Memorial Bridge (U.S. Highway 50) and finishes at a small sandy beach on Kent Island adjacent to the landmark Hemingway’s Restaurant. The GCBS is a charitable fundraiser for the Maryland Chapter of the March of Dimes.

Since 1993, the GCBS has been limited to 600 pre-registered entrants to ensure a safe and well-organized event. Typically 550 participants start the race in two waves, fifteen minutes apart, with the faster swimmers in the second group.

To be accepted, applicants must submit documentation that they have either completed a recent open-water event or completed a three-mile pool swim in under 2 hours 15 minutes. To increase safety, wetsuits are allowed and encouraged (the GCBS is not a USMS event).

Among the difficulties that may be encountered during the average 2 hour 25 minute swim are flailing arms and legs during the start, cross currents, swells, chop, hypothermia if the water is cold, nettle stings if the water is warm, and collisions with the bridge supports or rocks surrounding the jetties, islands and causeways. The National Oceanic and Atmospheric Administration (NOAA) measures tidal, current and weather conditions prior to the event and determines the optimum starting time for the event (this year it was 2 pm).

The GCBS requires a major commitment to proper training and open-water experience. My Ohio swim buddies heeded this warning, and trained diligently for many months. To prepare for the cold water, they went for swims in the local 50-meter outdoor pool just days after it was filled. They also did a mid-May training swim along the shores of Lake Erie. They were psyched and ready. Here are their reports:

Reg Kramer
Race day conditions are the big variable in open-water swimming. It’s the challenge and, to some, the appeal of the sport. If you’ve made a commitment to open water, you know how to train, what gear you need, what to eat and drink before the swim. But you’re not sure what the weather, currents, water temp, and the like will do to your game plan until you start stroking. 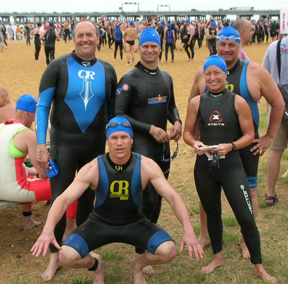 Our Wooster group spent a lot of time training together for this swim. We pushed each other, supported each other, checked each other’s yardage totals, and made plans to caravan to Maryland and have some fun while we were out there. This made the whole effort a lot easier than if we were training solo. But we were all rookies in the Chesapeake, and we weren’t completely sure what we were getting into. All we knew for sure was that it was an extremely popular and competitive event — this year the website was shut down 17 minutes after registration began for the 4.4-mile swim due to the volume of entries. Oh yeah, we also knew that an early edition of this race saw more than 90% of the swimmers plucked from the bay due to nightmare conditions.

From the beach on the western shore, the water looked reasonably calm. The temp was a comfortable 73, and we had all decided to wear wetsuits. The race starts north of the twin bridge spans, then quickly cuts into the space between the two bridges where the swimmers are required to stay until exiting south for the final quarter mile of the race.

We were warned about a north-to-south current for the first half of the race, which would then subside and begin moving in the opposite direction. We processed this pre-race information and incorporated it into our swimming strategies. But, we weren’t prepared for what was out there — the current was running south much faster than anyone thought. As Mike Tyson once said of his opponents: Everyone has a plan until I hit them.

The current caught us full on about a half mile into the swim and stayed with us for about 3 miles. Twice I had to sprint due north just to stay between the bridge spans and remain in the race (they plucked you out if you went of course). The rest of the time I had to point nearly 45 degrees northwest to stay on a due-west course. My favorite parts of open-water swimming are the long stretches of finding your rhythm and pace in the water and just cruising. There was none of that this time; I had to think about position all the time. 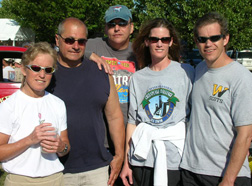 We all survived, but unfortunately one of the Wooster crew took a hard kick to the stomach at the worst possible time and was swept off course before he could recover. Laura Haven made her open-water debut in the 1-mile swim with 32:01 and a 5th-place finish in her age group. We also thrived on the food and ambience of Annapolis and the Eastern Shore. We left Chesapeake tired, but generally happy. I’m now sitting here wondering what surprises the next open-water swim will bring.  Editor’s note: Reg, who finished in 2:22.30, was the 235th male finisher and 22nd in his age group.

Jonathan Harvey
It’s all about the journey with good friends because if it were just the competition it would be disappointing. It was not the race any of us was expecting, especially since the race was scheduled during nap time, 2:15 PM ET. The currents were rough and finally at mile 3 when they subsided there were confused wave patterns due to the wind. All the alternate-breathing training was good for confidence but since the currents were so insistent about pressing us against the south bridge I quickly adjusted to my preferred right-side breathing. "Green Grow the Rushes Ho" (all 12 verses) kept me from focusing on every single stroke on the last third of the race. The final quarter mile was in shallows, where dolphining proved more effective than swimming, and helped me pass walkers and swimmers — always a thrill at the finish line. I have crossed the Bay Bridge many times in a vehicle, but what a thrill to stare up at this structure from below on every breath. Each swimmer had their own journey across the bay, but the beginning and the end was all about friendship and camaraderie. Editor’s note: Jonathan (1:57.56) was the 90th male finisher and was 16th in his age group.

Patrice Smith
The swim was the hardest thing I’ve done so far. The currents were strong and confusing and I’m pretty sure I made a couple tactical errors. I said I would never do that one again but just like a marathon you think maybe I could do better. I’m glad it’s over and I am glad I did it. I was grateful when one of the swimmers who I talked to before the race and had done it 10 times before said, "You’ll love this race." I asked her for advice and she said, "Just enjoy it." Afterward, she said this was by far the hardest and worst one she has ever done. That made me feel so much better because I sure as hell didn’t enjoy the race at all. The best part was we had a great time with our team and support staff. We ate well, drank well, saw many sites, and had lots of laughs.
Editor’s note: Patrice (2:11.47) was the 51st woman finisher, and 8th in her age group.

Michael Ollier
You put on a wetsuit and feel like Superman. I was one of six hundred superheroes who decided to swim 4.4 miles across this imposing body of water.

Time to leave the warm sand and plunge into the bay. One length. No flip turns. Adjust to the saltwater, find position, get smacked around a little and go for the bridge. Congestion, bottleneck as you enter the bridges. Swim around a few, try to get alone and get rhythm. Smack! Choke! Keep your cool. Get bearings. OH S%&*T! Where am I? How did I get so far right? I’m too close to the right bridge and heading out to sea. The current is too strong! Swim back to the left. Swim one hundred as hard as you can. GO! Bury your head, kick and get left! Getting nowhere. Again. Nowhere. Again. Exhaustion. It’s too early to be this exhausted. You didn’t train enough. You’re not going to be able to stay between the bridges. Mile One. There are others right of you. Are they off course? Get left! SMACK. Eyes meet with a wide-eyed swimmer who seems desperate. Are we near death? How deep is the bay at this point? If I went under would anyone notice? Bury your head and head left! Starting to feel alone. Everyone must be ahead. They knew to stay left. Must get back to the left bridge. If I see a kayak I’ll get out, I quit. Where is everyone? Swim harder. Mile Two. Find rhythm. One, two, three, peek, breathe right. One, two, three, breathe left. Choppy and strong current, but you can do this. Maybe this is one of those life-changing events. Maybe I’ll look at things like my life before the bay swim and life after. Who knows. Don’t forget to have fun. Editor’s note: Michael (2:05.16) was 129th male finisher and 23rd in his age group.

← Injure Your Way to a Better Stroke