No matter how much you try to ignore it, an injury can haunt you. I’ve tried to ignore mine for a couple weeks now, and it keeps reminding me each time I wake myself up rolling over in bed at night. 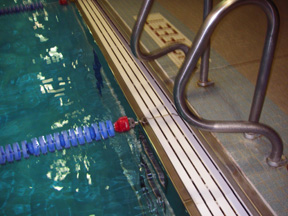 A couple weeks ago I was playing a game with some kids and inadvertently ran into someone. His elbow caught me pretty hard in my upper rib area, and I felt the impact immediately. My first instinct was to make sure he was OK, which he was, but I knew something was wrong. Typically, I kept playing so, fortunately for me, the game ended shortly after that.

I coached for a couple hours, then decided to dive in with some of the swimmers. As I was in mid air, my arms extending for the first time over my head, I knew I was in trouble. Then came impact — and a stinging sensation through my chest. As I continued instinctively into a breaststroke pulldown, I felt as much pain as I’ve ever felt in my life.

After two weeks, the pain is marginally less and I’ve come to the conclusion that it’s either a really deep bruise or a cracked rib. Whatcha gonna do though? From everyone I’ve talked to, the prescribed therapy would be pretty much the same… rest it till it doesn’t hurt any more.

Even though I’ve not been the most ACTIVE swimmer in the past few years, I do enjoy getting in with my swimmers, challenging them periodically, and at least KNOWING I could swim pretty fast any time I wanted to. The problem now is, I can’t. Everything I do in the water hurts. There are two specific points that cause the MOST pain: getting in… and getting out. The impact of hitting the water still hurts, but I’m NOT going to slide into the deep end… it’s against my principles. Lifting myself up, and out of the pool means connecting the muscles that tie all across my chest, and through the lats. This is the spot that hurts the most.

So, what does this mean for my swimming? Through my adventures in revisiting the water, during the most painful time, I’ve realized that pain, especially physical, is a wake-up call. Pain, in its own sick way, makes you know you’re alive. There’s nothing relaxed, content, or complacent about pain… unless you let it control you.

My Father used to tell me that the BEST thing that ever happened to his college basketball career was breaking his arm. Seems Dad loved to dribble and shoot with ONLY his right hand. Well, he broke his right arm. Because my Dad LOVED basketball, he proceeded to play with his LEFT hand for the next six weeks until he got the cast off. When he started playing with both hands again, he was a more complete player. At 5’6", he made the Toledo All-City Basketball team, and was described in the newspaper as "tenacious." Gotta love that fighting spirit.

What can YOU learn through an injury? What can you discover about your strokes when you can’t do them completely — or when you have to really think about what the injured part is doing? What can you discover you do in EACH stroke that MAY have even caused the injury in the first place? Here are a few things that I’ve learned as I’ve ventured back to the pool.

1. Entry.  OK… stop trying to be so macho. Slide in, you idiot. Who in their right mind SMASHES a bruised rib against ANYTHING. Even the water hurts.

2. Streamline. Extending the arms above the head hurts, but I’ve learned that sometimes I "over extend." When I arch my back a bit too much, that’s when I feel the most pain through my ribs. I need to stay straighter by pulling in my abs and rolling my hips under just a bit. This takes some strain off the painful area, and allows me to streamline even better.

.3. Initial stroke. This is really for freestyle and backstroke, but does tie into the TIMING of the first stroke for fly and breast. The rule of thumb is that you initiate your first stroke with the lower hand; however, many people, through habit, feel, whatever, initiate with the top hand. My new rule of thumb is: Initiate the first stroke with the injured side. By connecting into the water at the higher speed of a good push off, that arm doesn’t have to work so hard, and can FALL or slip through the stroke, helping to maintain that speed, rather than regain momentum. 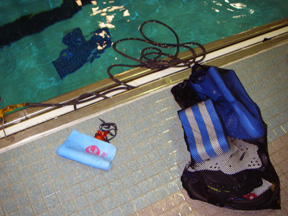 4. Maintain momentum AT ALL COSTS. Every once in a while you’ll have an imperfect turn. You push off at the wrong angle, you turn too close to the wall and don’t get your feet planted for a great push off, you turn too far away and barely hit the wall, or you simply don’t push off hard enough. If you’re injured or in pain, you are quicly reminded just how hard it is to CREATE momentum. Because accelerating in mid pool is so tough, you’ll ALWAYS have to be aware of the importance of doing everything correctly off the wall. While this should be a given, we all still fail to be perfect.

5. Butterfly. Man, that 2nd kick hurts. OK, I swam only a couple lengths of fly before I knew it was just stupid (I looked like a learn-to-swim student again). When I tried to rely on my legs to move me forward, the pain just got worse. Seems in the short-axis strokes, everything is tied together, and the final push of the arms, in combination with the 2nd kick, put my chest in an awkward position. What did I learn? Sometimes you just have to STOP. For the time being, there will be no sprint fly in my logbook. I can, however, swim longer fly if I switch to my single-kick fly, which is actually a pretty functional stroke. Don’t over kick, and keep the hand entry SOFT SOFT SOFT.

6. Backstroke.  DO NOT… I repeat… DO NOT OVER REACH!!!! If that didn’t give the sense of pain quite enough… take a hammer out, and tap your head a few times while you read that line. While we repeat the "do not over reach" phrase till we’re blue in the face, it’s SO difficult to get the point across to swimmers, simply because what they feel they’re doing, they usually aren’t. This is where partner coaching, a cracked rib, video taping, a cracked rib, wide-entry drills, or even, a cracked rib will remind you that if you try to over extend above your head, there’s just no power with the initial move. By placing my hands wider than I think I should, I not only get a better and quicker catch but also it doesn’t hurt my rib as much. Who knows, maybe I could even beat my breaststroke split on an IM now (I’d probably have to break a few ribs for that).

7. Breaststroke.  Pull down EARLY on the underwater pull and use a mini, mini, mini, mini, mini pull. If I wait just a bit too long on the glide to initiate my underwater pull, I’ve lost momentum. We learned from above that momentum loss = great pain. If I pull down a bit sooner, the arms help to maintain that momentum, rather than try to create speed. On the stroke side of things, a pull that’s too big simply hurts. A wide outsweep, and drawing the body forward, are just painful. What feels best is to create very little resistance. That means I use only the hands and wrists, I focus on how high the legs recover and how quickly they kick down, and I try to think about head position during the pseudo extension. The injury makes me much more aware of the places where I create resistance.

8. Freestyle. Rotation and fall. There’s an ongoing debate of whether rotation creates propulsion. The conclusion seemed to be that rotation in itself is not propulsive, but that the motion of the arm, if it’s CONNECTED to that rotation, is propulsive. In other words, if the arm is positioned or angled like the blade of a propeller, and the body rotates in such a way as to add force and speed to the movement of that blade, propulsion will occur. Well… I can safely say now… that’s true, but it ain’t MUCH speed. You simply have to pull, push, and engage your arm much more, and to me, right now, that means pain. While this certainly is teaching me how to connect to that rotation much better, if I was FORCED to rush through a set, I’d eventually become a very lopsided swimmer.

There you have it. My adventure in injury. Who’s to say how long this is going to take, some say 6 to 8 weeks. Whatever, it is what it is, and it’ll take as long as it does. What I’m going to try to do is learn things about how I swim while this is going on. I’m also going to experiment with variations in my strokes which don’t cause pain. Will I create bad habits? Not if I’m thinking about what I’m doing. Do I have the option of discovering something I didn’t know I could do? Because I’m forced to do things differently… absolutely.