← Your Coolness Will Cost You

A long time ago there was a television show called Kung Fu. Many of the segments featured a young student, who had to pass tests given by his master in order to move into the real world. One test was to walk on rice paper, without leaving a trace of where he had walked.

The same concept can be applied to swimming ï¿½ with each wall becoming a piece of rice paper. Too often, swimmers attack the wall so hard that they actually POP or BOUNCE off the wall. Orï¿½they STAB at the wall and punch through it. You want a fast turn, yes, but the idea is to plant the feet and drive off the wall ï¿½ without ripping through the rice paper. 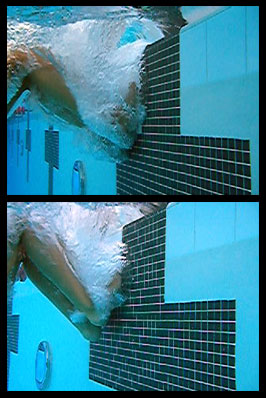 When you practice this drill, youï¿½ll need a friend who can go under water and LISTEN to you turn. Thatï¿½s right. Listen, not watch. In the video clip, you may not be able to hear the difference between the first turn and the second turn. But at the pool, your friend will be able to hear. Have him or her go under water and listen as your feet hit the wall on your FASTEST turns. If your friend hears ANYTHING, then youï¿½ve broken through the rice paper. Your feet should not make any sound when they hit the wall. And your heels should not touch the wall. Try to plant only the balls of your feet. You should feel a nice spring as you leave the wall.

Why Do It:
Trying to balance attack with finesse is part of swimming. This drill offers a great way to learn that balance.

How To Do It:
1. You must SPRINT this drill. Set yourself up a bit outside the flags, and get ready to HAMMER into the wall (that means SPRINT SPRINT SPRINT).

2. Listen and feel. If youï¿½re working with a friend, listen to see if you can hear the feet hit the wall. If so, the ï¿½plantï¿½ is too hard, and youï¿½ve broken through the paper. If youï¿½re working alone, feel how hard your feet are making contact with the wall. If you feel an abrupt stop, itï¿½s too hard. You should almost feel your feet melting into the wall, but only for a second.

3. DRIVE off the wall. Use that stored energy in the uncoiling feel and legs, to spring off the wall and toward the other end.

How To Do It Really Well (the Fine Points):
Heck, the entire thing is fine point. There is such a fine line between slowing a bit too much and introducing hesitation into your turns, and popping off too quickly and NOT getting that drive. This takes a lot of practice to get JUST right ALL the time. Get to it… grasshoppah. 🙂

Send Page to a Friend

All Strokes – Reading the Clock

Coaches will understand the importance of this week’s video, especially when working with younger swimmers. Why do it: Learning how … READ

What’s old is new again.  Back in the “old days,” breaststrokers had to keep the legs firm, rigid, and straight … READ

← Your Coolness Will Cost You