All Strokes – Baby Under Water →

Remember Aaron, the young man who overcame his fear of the water in order to earn his Boy Scout swimming and lifesaving badges? Well, Aaron is closing in on his goal of becoming an Eagle Scout. He recently completed his community project, the final requirement for attaining the rank of Eagle. As his project, Aaron chose to build a raft for the public beach. He recently sent photos and the following report. Congratulations, Aaron. You are a true inspiration!

To get to the Eagle Scout Rank you must first earn twenty-one merit badges. Eleven are predefined for the rank of Eagle Scout. The other ten are electives. You are also required to hold several leadership positions during your scouting career. Once this has been completed, you present three projects to the Scouting Committee. These projects are based on community needs or wants, or helping an individual.

My three projects I presented were:
1. An information kiosk at the park.
2. Rebuilding the tomb at the La Salette Shrine.
3. Building a new raft for the Shakoma Beach on Mascoma Lake. 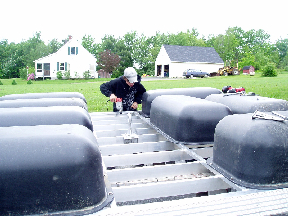 I chose the raft for two reasons. First, the recreation department needed a raft so that a Red Cross diving and lifesaving class could be taught. This is something they have not been able to do for several years because of the lack of a raft. Second, swimming and lifesaving merit badges were required for the Eagle Scout rank. I worked hard to earn these and am proud of this accomplishment.

The raft cost was about $2,200. I wrote letters to the community and to some of my family members asking for donations. In two months I raised the money. While this was going on I met with the Town Manager and the Recreation Department to ask what design they would like and need. 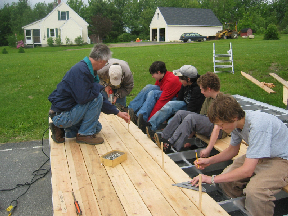 They decided that a 10′ x 10′ raft with a ladder would be best. I found an aluminum frame and floats at a welding company in Franklin, NH. The company helped me to put together the size raft. My dad and I went to pick up the frame, floats, and ladder.

Next, I had to decide on the decking. I wanted to use composite boards, but they were too expensive. I had to go with cedar because it was less expensive, but it was still a good wood and had a life of about 15-20 years. The aluminum frame should last forever. 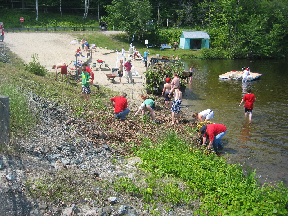 After gathering all the materials, I invited four other scouts to our house on a Sunday afternoon to put it together (my dad and I had already cut the boards and sealed them with a non-toxic sealant so that they would last longer). This process took about five hours to put the boards and float on. The total project took four months from start to finish. 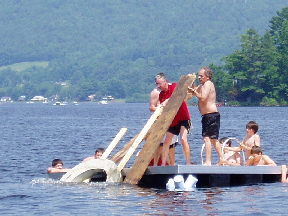 On June 18th, we borrowed our neighbor’s tractor trailer to transport the raft to the beach. The whole troop came to help. The town supplied a huge cast-iron manhole tunnel to use as an anchor.

We unloaded the raft at the boat landing (a volunteer from the town came to put the anchor on the raft) and with the help of five other scouts we swam/pushed the raft under the Shaker Beach Bridge to the beach. It was sort of the maiden voyage of the raft. 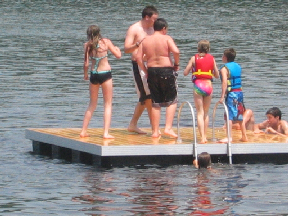 We also had a clean-up day at the beach while we finished anchoring the raft and put the ladder on. There was a barbecue after the work. It was a sunny, hot day  — a great day to finish my project. Now when we drive by we see everybody at the beach enjoying the raft. There’s also a swim teacher.

My dream of becoming an Eagle Scout is about to come true, and in turn I am happy to give something back to swimming.

All Strokes – Baby Under Water →