Hi everyone, and it’s been a VERY hectic week at Senior Nationals in Irvine, CA. 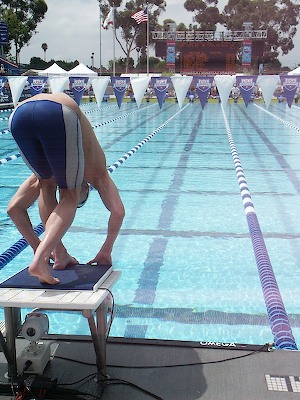 Obviously watching Brendan Hansen break the World Record in the 100 breaststroke has been the highlight for me, but there have been some other incredible races as well. The women’s 400 Freestyle proved to be one of the best races EVER at a meet like this. Kate Zieglar fell behind Katie Hoff with a 50 left, and Haley Peirsol was head to head with Kate. As the three came to the finish, it was really anyones race. Kate’s final reach to the wall proved to be the deciding factor, but her kick on the last 50 certainly helped as well. Anyone that says the kick isn’t a propulsive force in swimming, should watch this race.

Michael Phelps continues to amaze, even though he’s not completely pleased with his swims, it’s an incredible feat to keep winning everything. The race between him and Ian Crocker was very exciting, and even though Ian got touched out, you get the distinct feeling that this is FAR from being settled.

Aaron Peirsol’s win in the 100 back showed how he’s able to handle challenges as well. With Randal Bal clearly ahead at the 50, Aaron came out of the turn and started the charge. Finishing just off his own World Record in the 100 back at 53.3, you could tell how happy he was with his performance. It’s always good to see even THESE athletes get excited with a swim, even if it’s not their best time. Aaron just loves to race.

There was a great opportunity to watch Brendan try to break the World Record in the 50 breast during time trials yesterday, and many people stuck around to view it. I was able to talk to Brendan prior to his race to ask him how he was going to approach it differently from his 100. He had his game plan all mapped out. The stage was set, he had taken out his 100 breast in 27.6, the American Record is 27.38, and the World Record is 27.18. It certainly seemed like all the records were within reach, and Brendan was ready. 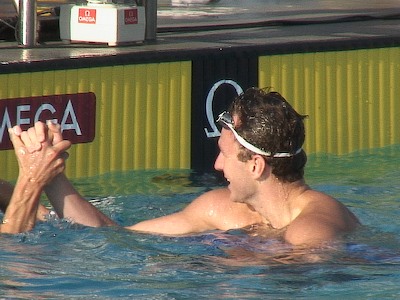 While putting everything into the effort, he hit the wall and glanced up to the board… 27.6. He smiled, turned, and cruised back to a 1:04, which in itself is a pretty darn good swim. He said afterwards, he felt TOO good, and he should have just turned and kept going. Who knows what the 100 would have been.

He hasn’t trained for the 50, so it was just a fun, bonus race for him. His stroke rate wasn’t rushed, and he and Eddie Reese both said it was just too slow… but they both smiled when the 200 was brought up. Seems like there’s more to come with the events Brendan has really trained for.

What was MOST refreshing about this, is that here is an Olympic Champion, World Champion, and World Record holder, hanging around for TIME TRIALS. He just LOVES the sport, and like Aaron and Ian, just LOVES to race.

Many more races to come, and I hope you’ve been following the updates, interviews, and wrap-ups on swimmingworldmagazine.com.