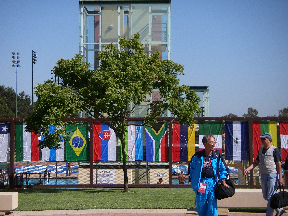 The registration area was hopping yesterday as 5400 swimmers from 73 countries converged on Stanford’s Avery Aquatic Center (AAC) for the XI FINA World Masters Championships. This event, held every two years, inspires swimmers to reach higher in all areas of their training, fitness, and technique. It also inspires national pride in the best of ways, similar to what happens in a year of World-Cup Soccer. The AAC was buzzing with swimmers in brilliantly colored team uniforms — Italy, Chile, France, Canada, Argentina, India, Japan, China. We all had to check in to get our credentials, then we had a chance to warm up in both of the 50-meter competition pools — the Belardi pool and the Baker pool. 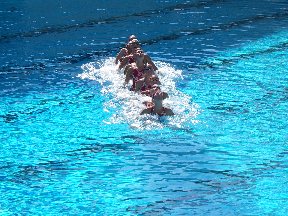 FINA also encompasses water polo, sychronized swimming, diving, and open-water swimming, so there were some of those competitors warming up as well. 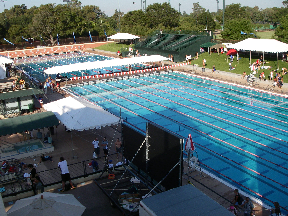 I wanted to check out both pools, because each day they will switch who swims in which pool. One day the women are in Belardi and the men are in Baker. Next day we switch. It was exciting to jump in the water at this fabled pool, where multiple Olympians have trained. The water felt great — probably 81 degrees — and I was pleasantly surprised at the flat walls. In international competition, the walls are flat. Stanford’s walls are not naturally flat, so they built boxes at the ends, to which they attached raised Colorado Timing pads. The pads are made of a grippy rubber, so it was pretty easy to find some purchase for a turn.

Warmup went really smoothly, despite the language differences. We all know how to speak fly, back, breast, free. 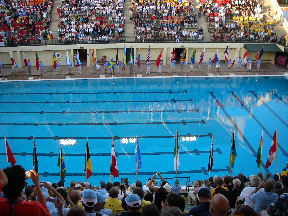 At 6 pm, they closed the pools, and swimmers began to assemble in the Avery stadium for the opening ceremony. We all rocked to the hour of pump-up music, which included rocking tunes from all across the globe. The Macarena really got everyone going, and both sides of the stadium started a little wave action. After opening remarks, an 11-year-old swimmer belted out the host country’s national anthem. Then came a display of all the FINA sports by Stanford youth swimmers, followed by the parade of flags — one for each of the 73 countries represented at the championships. Ethnic dances, a speech by the mayor, and more excitement followed. But the overall mood was one of anticipation, team pride, and just pure excitement to be gathered on a global scale on a beautiful clear night at one of the world’s greatest swimming complexes. Picture thousands of athletes tapered to the best shape of their lives, grooving and cheering together on the eve of competition. 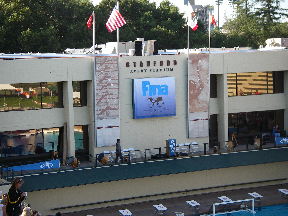