The Isle of Jersey is one of the Channel Islands located 110 miles south of London and 14 miles off the coast of France. The island is five miles wide, nine miles long, and 41.5 miles around — should you ever want to swim it. On August 25, 2006, Don Walsh from New Jersey, USA, and Alice Harvey, from the Isle of Jersey did just that. Here’s Don’s story. 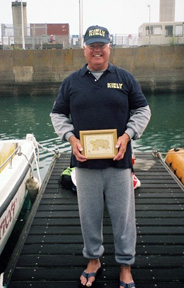 On August 19th I was met at Gatwick Airport by friends and English Channel veterans Laura Lopez-Bonilla and Cliff Golding. Laura would be my one of my crew for the 41.5-mile swim. The next day, we flew to the Isle of Jersey, and were met by Charlie Gravett, the pilot extraordinaire who takes solo and relay teams around the island. It would be up to Charlie to determine when  — and if — we could attempt our swim. With the unpredictable and ever-changing weather conditions in the Channel Islands, it was a big question whether we would find the window of 12+ hours that we would need.

After several days of sightseeing and training swims, we got the call on Thursday evening. "We’re going tomorrow," Charlie informed us. "Meet me at the dock at 5:00 am."

YIKES! Panic time. I had planned on using Friday to rest, hydrate, and prepare my sports drinks and "stuff" for the swim on Saturday. But with the help of my wife, Millie, and son, Sean, I was able to run through my checklist and get everything packed for morning.

Let me just say this: "It’s very dark at 4:30 in the morning!" We assembled at the dock — Alice Harvey and her support crew; Charlie aboard "Sea Swimmer" and his mate Mick aboard "Channel Girl;" and Andy, the kayaker who would guide me through the rocks. We loaded the boats and headed through the darkness across the harbor to the official starting point at Elizabeth Castle.

As we motored out to the breakwater, Sean started to apply a generous dose of lanolin under my arms so I wouldn’t chafe during my swim. Charlie asked that he not put it anywhere else as I would foul the boat getting on and off. OOPS! I had planned on wearing five pounds of this gooey mix to prevent chafing and to help keep me warm in the 64-degree waters of the Channel.

Charlie was dead-on with his forecast. The wind stopped and the sun came up to shine over calm seas. We couldn’t have asked for better conditions. I touched the breakwater at Elizabeth Castle and said, "I’ll be back!" Then I took the first of 24,000 strokes that would take me around the Isle of Jersey.

The sun wasn’t up yet but there was enough light to follow "Sea Swimmer" across the harbor and out through the rocks on the southeast side of the island. There, Andy took over for the next 2 hours and guided me through the rocks that jutted up from the bottom. "Sea Swimmer" was able to slide inside the rocks every half hour for my feedings, but then returned to the safety of deeper waters while Andy set my course. When we cleared the rocks and rounded the southeast corner of the island, Andy waved good-bye and shouted "good luck!" I had to take a moment and thank him for getting me through the rocks safely. Now it was up to Charlie, Laura, and Sean to get me safely around the rest of the island.

I must also mention that two good friends, Pat and Betsy Frank, flew over from Atlanta to escort Millie around the island by car. There are many vantage points to view the swim from land, and Pat was able to document my swim on film.

I had arranged with Sean to receive Accel Gel and Accelerade Sports drink every half hour. I also took mouthwash at every feeding to prevent my lips and tongue from swelling from being in the salt water all day. Believe me, it works! Sean tied the three bottles to a 60-foot length of parachute cord and floated them back to me from the boat. I rolled onto my back and took the bottles one-by-one and tried to get them down as quickly as possible. Although necessary, stopping to feed every half hour adds to the overall time of your swim, so this was a skill that I practiced during my training. Another thing to keep in mind is not to spend too much time talking. I basically listened to Charlie, Laura, and Sean rather than trying to talk. Besides, the message soon became obvious: "swim faster!" We maintained the feeding schedule throughout the day, which was important in order to get approximately 400 to 450 calories in each hour. That’s what I trained on over the past year, so that’s what I knew I needed in order to keep going. I felt that I could have continued as long as needed to complete my swim. 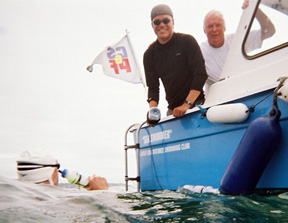 Swimming around the Isle of Jersey is amazing; there’s nothing like it in America. There is a breakwater at St Catherine’s and it reaches out into the sea like a long arm. It provided Millie, Pat, and Betsy with a great vantage point to see me swimming. I’ll never forget what a beautiful sight it was swimming to Gorey Castle on the east coast of the island. The castle is enormous and stands on top of a cliff, so it’s visible for miles both on the approach and after I swam by it, I could see it over my shoulder for hours. I don’t think it was out of my view until after I rounded the northeast corner and headed along the north shore of the island. That’s where "Sea Swimmer" took me off-shore to take advantage of the current.

I didn’t know until my visit to the Maritime Museum on Jersey that the flow of water in the Channel is stronger on the French side due to the earth’s rotation. Go figure! I never had the feeling that I was moving fast simply because everything on the island is so large, plus I was about 2 to 3 miles off shore.

With the sun shining and no winds, I had flat waters all the way until the west side of the island where the Channel and the Atlantic Ocean meet. The rules allow another swimmer to swim along side of you for an hour, but not to pace you. We had decided before my swim that Laura would join me in the water. Unfortunately on the west side of the island it’s like swimming in a washing machine. I was able to power through it and Laura is a Channel swimmer so she was able to deal with it as well. Laura had to get out before we cleared five-mile beach, but having another swimmer in the water was very uplifting.

I continued on my own swimming through the washing machine and set my course for Corbierre Lighthouse where I made my final turn homeward toward Elizabeth Castle. Corbierre Lighthouse is a magnificent sight. It’s pure white and stands high above the landscape like the space shuttle at NASA. We had to deal with some rocks off the lighthouse, but they were nothing like the ones on the southeast corner of the island.

Once I rounded the corner and headed back toward Elizabeth Castle I knew that I would complete the swim. It didn’t matter how long it took me, I was going to stay in the water until I touched that breakwater at Elizabeth Castle. 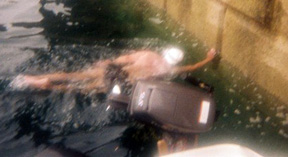 My crew kept me entertained by making faces and splashing me during the day. Charlie joked that he couldn’t see much effort in my stroke while watching me from the surface, so he figured there must be a lot going on under water. I told him don’t get excited, there’s nothing going on there either. He also joked that he’d never seen a man my age swim all day in cold water with such a silly grin on his face.

After 11 hours and 3 minutes of swimming, I touched the breakwater at Elizabeth Castle. I had swum at a rate of 37 strokes per minute all day long. My crew took averages and my stroke count never varied. When I entered St Aubin’s Bay, my crew told me to sprint the last mile and a half in order to make it under 11 hours, but after 40 miles of swimming, there really wasn’t going to be any sprinting. But I did give them a good show as I took my stroke count up to 37 and a half!

If the swim had gone an hour longer it would have been canceled because the wind, rain, and then the fog closed out the visibility. I was so lucky! They weather was so poor that they allowed only two swims this summer — mine and Alice’s plus one other. So now I’m the first person from New Jersey to swim around the Isle of Jersey and I did it in the fewest number of strokes — 37 strokes per minute and under 24,000 stokes for the day when you back out the time for feedings. My name will go into the Maritime Museum along with the other swimmers who have completed the round-island swim. More important, I was able to raise over $7,000.00 for the families that lost SEALs during Operation Red Wing in 2005.

The people who helped me and whom I met while on the Isle of Jersey are the best in the world! I also thank my family for their endless support during my training and swim, as well as all my friends who encouraged me and helped me with training. Thank you to Matt Vecchione of Pacific Health Products for providing me with Accelerade Sports Drinks and Accel Gels that gave me the energy to complete the 41.5-mile swim, and to John Kiely of Kiely Equipment Company of Long Branch, NJ for his very generous financial support towards our trip. Finally, because I did this swim as a fundraiser, I thank the countless peopled who donated more than $7000 to the Naval Special Warfare Foundation.

Editors note: If you would like to support Don’s efforts and give to the Naval Special Warfare Foundation. You can donate online through www.NSWFoundation.org or by mailing your donation to NSW Foundation, P.O. Box 5965, Virginia Beach, Virginia, 23471. Please reference Don Walsh on your contribution. The NSW Foundation is a national non-profit 501(c)3 corporation, 31-1728910, and your donations are tax deductible.

You can also read about Don at the following links: