Reflection of a coach who had a competitor at the Worlds in the junior division.

"It gets harder and harder to win the world title. There are just so many guys willing to do anything to get to the front and you’ve got to be so hungry and have so much drive and sometimes if you just can’t do that you’ve just got to step aside."
— Hamish Carter. Olympic Champion, Athens 2004.
Silver Medal at Triathlon World Championship, Lausanne 2006 (35 years old) 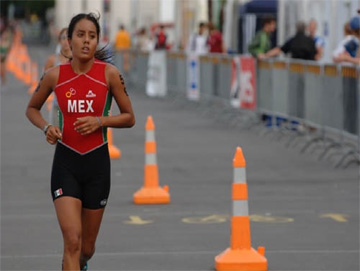 People often think that history makes us, when I believe champions create their histories. To be part of the best in the world is already to show years of dedication, willingness, desire, clear intention, and certainly something that it is between the lines. Children choose before the age of six. Parents and/or kids made choices that close certain doors forever or give them the arms to push the door limits forever. Time is the only element, which narrows the opportunities. Carter’s comments summarize the competition that exists today. He has been competing for the last twenty years and for the last ten years in the top ten. An athlete at any level needs to rewrite constantly his/her history to enhance what she/he has, but if you do not have it at first, something like mental toughness or the drive to succeed, it is very difficult to get it (as wrote Dave Winfield). 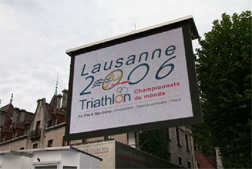 I had the opportunity of "feeling" the 2006 World Championship (WC). I have done it as an athlete (age grouper) but this year, as a coach, I learnt by feeling and looking the inside fighting of great athletes. September 3, while walking around the streets of Lausanne from one hill to the other, (the elites had two hills, graded 12.5 and 10, and went over them seven times), I found Emma Snowsill warming up, it was 8:30 in the morning and she was competing at 10:30. She was alone, tranquil, imagining in her head that she was going to win. She won without doubts. I have followed her athletic career for years; she was running, passed by and returned so sure of herself. Hours later, she was struggling on the bike next to another superstar, Vanessa Fernandes. How did Emma get so much confidence? This skinny little girl with a smile on her face, lonely in her journey, is already part of the triathlon’s history (her/story).

During the cycling part, I positioned myself running from one hill to the other to see the strategies. Lausanne was gorgeous, surrounding by water, blue sky, Alps on the back, and those incredible athletes maintaining 39 km per hour in the men’s field, almost 35 for the women, in such a difficult course. In the men’s event, a group of ten cyclists made the break away, giving the others no chance to win. On the women’s cycling part, more than twenty girls were fighting in the first group. However, Emma and Vanessa started the running side by side in front of everybody, jumping from their bikes, looking as if they were from another planet. At the middle of the first loop of four, Emma was already more relaxed compared to Vanessa, keeping a very high cadence, above 210 steps per minute, almost four steps per second. Vanessa looked very strong but did not have the fluidity of the movement. In the second loop, the skinny Australian was by herself, like early in the morning near the Milan Park, flying faithfully on giving everything she had. Emma won by 45 seconds, running faster than many of the elite males, 33:45 for the last 10 kilometers, maintaining a pace of 3 minutes 21 seconds per kilometers. 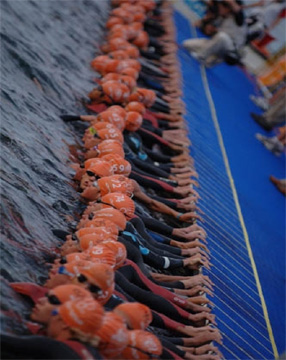 Further behind, I saw Lauren Groves, just 25 years old, Canadian athlete unknown two years back. I saw her for the first time in Veracruz years ago. She has improved over the last two years and looked as Emma, with the same economy of movement. I thought about the difficulties to grow-up for my athletes when I saw Lauren, and was tempted to ask her how she did it. Lauren barely won by one second in Veracruz against a Mexican athlete that I used to help with her swimming three years back; the athlete retired at the age of 23. Lengthen your stride, strive for one more level of excellence, take that gamble, do not play safe, as Johnny Miller wrote. Lauren is another great athlete, making her story.

Vanessa comes from a country known to me for the strong immigration that took place in the sixties and seventies when I was growing up in Switzerland. Portugal did not have the order of other countries in Europe but had changed drastically in the last twenty years to become a strong member in the European community and producer of great triathletes. Vanessa, just 21 years old, has won 12 World Cup races in a row this Sunday (September 24), reaching Emma Carney’s record. 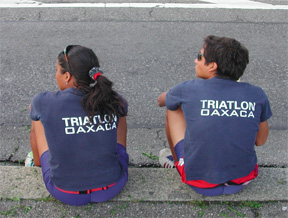 Snowsill, the 25 years old Australian, the current world champion who already won three world titles said of her history-making performance: "I ran like I had nothing to lose. I just had to go out and leave nothing behind." Emma got her first swimming class at the age of a year and half and began to shape her story.

Tim Don, the 2006 triathlon World Champion, chronics his victory. He gives us inside of what the champion is made of and what Carter refers to: "Here was a break on the bike, and I didn’t go with it" So I jumped across on my own and sat in for a couple of k and then said, "Come on boys, this is it, this is how you get on the podium."

Don was 22 years of age when he placed 10th at the Olympics in Sydney; he has won everything in triathlon except the Olympics. Eight years back, on the same course, he won the Junior Elite Championship. Tim was so hungry that he can run a 3 minutes 4 seconds pace per kilometer, just two seconds faster per 1000 meters than Hamish. On the third lap, Tim pushed the pace. "I could see there was a meter gap so I just eased away and then the gap grew. You take five meters on an Olympic Champion and he doesn’t give easily so I had to put may head down for the last five kilometers." 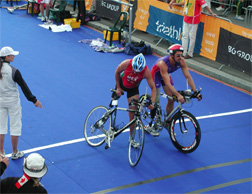 Where is all this courage coming from? Kirsten Sweetland the new junior star has been focusing in winning Lausanne WC since her disappointing DNF in Gamagori WC last year. Putting the energy, unafraid to put everything on the line, having clear intention, and maybe knowing, as French athlete Frederic Belaubre, winner of the 2006 Bejing future Olympic course, said,  "Sport is not an exact science, you need to fight to obtain what you want, you need to be out of the flock."   Where is all this courage coming from? This fluidity? This confidence? These elements make the difference. Carter said: "hungry competitors."