Swimming down the Hudson River may not be your idea of a good time, but it all depends on whom you’re with. It also depends on why you’re doing it. 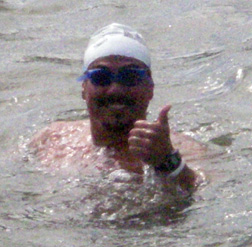 A few years ago, my friend Craig Beardsley got me involved in the Swim Across America. This event, which is now in its 20th year with swim events at six locations across the US, is responsible for raising more than $13.5 million for cancer research, prevention, and treatment. The event locations range from Boston, Chicago, Long Island Sound, Suffolk, San Francisco, and the Hudson River. Over the past few years, I’ve been able to participate in the swims on Long Island Sound and in the Hudson River. This year, because of scheduling conflicts, I was able to participate only in the Hudson River swim.

Swimming from the Tappan Zee to the George Washington Bridge may seem like an insurmountable task, especially for a pool swimmer, but actually it was very easy. When attempting something like this, it’s always a good idea to bring lots of friends. It’s even better idea to bring friends who are really good swimmers. 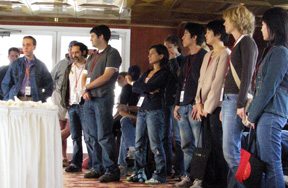 This swim is easier than it looks. You do it as a relay consisting of 40 people, and we all take small turns to accomplish a large task. small groups swim segments of 5- , 10- , or 15-minute swims, depending on your ability and/or willingness. The flexibility of the organizers was key, because many people who started with a fifteen-minute segment soon opted for one of the shorter swims. Personally, I was very satisfied with the ten-minute segment. With the water temperature being just a little brisk, five minutes seemed too short, and fifteen minutes was just silly. I decided to leave that to the younger, more fit swimmers.

All in all, the swimming is only a very small part of this day. The swim down the Hudson River is more about the event than the people. On the boat ride up the river to the start, there is an opportunity to meet the people who are direct beneficiaries of the event — the doctors and researchers who will use the proceeds to help fight a terrible disease. Also, having the opportunity to meet these doctors shows us that this isn’t just a fight in our country, but a global crusade.

As the doctors introduced themselves, the level of collaboration became clear. Mexico, Italy, China, Japan, Germany, and even New York City were all represented. All these great minds coming together, for one cause, to find a cure for cancer.

The doctors described the research they were doing, and thanked the people on the boat for their efforts. This short and fun swim over the past few years has funded the Swim Across America Research lab at Memorial Sloan Kettering Cancer Center. To again realize that our little contribution of swimming down the Hudson River could help such a great organization is, indeed, humbling. 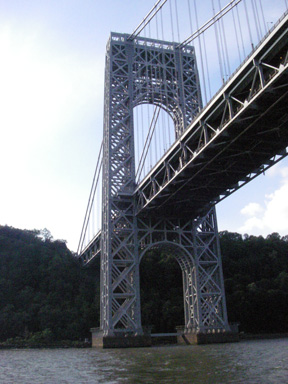 There are few things in life that are more fun then spending a day with close friends. However, one thing that makes it even better, is knowing that day will benefit others.

Swimming into Manhattan is always an interesting experience. This year was no different. The closer we got to the city, the larger the waves got. Not being very adept at open-water swimming, I proceeded to rely on the drills we post here on the site. My favorite drill — breaststroke with an extra kick — came in very handy. Two-kicks/one-pull breaststroke at least allowed me to stay under the waves. I also couldn’t avoid having a little fun with one of the other swimmers, as we raced a little butterfly. Suffice it to say, we did not race very far. She was young, and very fast.

The swim across America is an event worth working into the calendar. Next year we hope the Hudson River swim is the biggest it’s ever been. Watch for notices here on this web site, and of course at swimacrossamerica.org.