Just when you think you’ve run out of fun ways to play in training, someone will convince you to READ the manual that comes with the tools you already use. The Tempo Trainer is a perfect example of this. 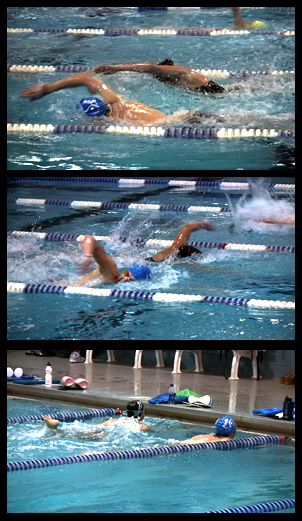 You don’t have to read too far back to understand how much we love the TT. For the past few weeks, we’ve had an article, or a set that features the use of this tool. Please understand that Finis does not pay us to endorse their product or to produce these articles. We like the Finis Tempo Trainer because it’s a cheap, simple tool that makes you aware of certain things in your stroke, and that makes training more interesting and fun. Now we’ve found yet another use for the TT.

Recently, at a coaches clinic, I was talking with one of the Finis reps about the TT and he said, "I like to set it to beep at 12-second intervals in Mode 2 and try to make it to the other end before it goes off."    Being the detective type that I am, I inquired as to what this "Mode 2" was that he was talking about. Turns out there is another function of the TT. If you scroll through the time settings from .2 of a second up to 9.99 seconds, you then enter Mode 2, which allows for time settings at one-second intervals from 10 seconds up to 9.59 minutes. When the TT is in Mode 2, it gives a triple BEEP BEEP BEEP rather than the single BEEP in Mode 1. Mode 2 is more like an alarm, or a count-down to a time-bomb. You’ve got to finish your swim BEFORE you hear the triple beep.

As soon as my friend described Mode 2, my mind started going. Race to the time… and even better… PACE. If the TT will go off continuously every SET number of seconds, then swimmers could easily use this to learn their pace.

It didn’t take long to incorporate this into our practice, and the following was the first set we did. This was a very easy way to engage the swimmers, and get them thinking about their PACE, rather than worrying about how fast they were swimming:

2 x 300 with the TT set at :18
The pace per 100 now drops to 1:12. You’ll see the swimmers initially rushing on the 2nd or 3rd 25 when they realize they may have started off a bit too slowly. This immediate change in rhythm is good for them to learn and be aware of in case the need arises in a race (someone next to them taking off in the middle of a race).

3 x 200 with the TT set at :17
Now we’re starting to move a bit. The average 100 time is now down to 1:08. Still not incredibly fast, but for 16-year-old stroke swimmers, it’s getting more like a workout. Sometimes the faster the pace, the easier it is for the swimmers to maintain the rhythm.

4 x 100 with the TT set at :16
With the average 100 time now down to 1:04, a real pace starts to emerge. The swimmers will usually hit the first 25 a bit faster than the set time, and now start to hear the alarms IN their turn, or while they’re pushing off. Maintaining the ‘spot’ that the alarm goes off at each end is the goal now, not necessarily hitting exactly at the wall, but hearing it as they LEAVE the wall. Always staying just a bit faster than the TT.

6 x 50 with the TT set at :15
Now, finally at a real pace, the swimmers will work to maintain an EVEN split. Rather than over swimming, as would be common in the previous sets, the swimmers will try to leave, turn, and finish ON the beeps. A great way to practice this is FEET to FEET. Finish with a turn, hearing the beep EXACTLY when the feet hit the wall. The pace should start to become automatic, and now the EASE with which these 50s are accomplished becomes the goal.

There are obviously some pros and cons with this method of training. First, an additional PRO… REACTION time. When the interval becomes the BEEP, rather than the CLOCK… the swimmers will have to LISTEN to what’s going on, and be ready to explode off the wall the instant they hear the alarm. This could also be used as a starting drill. Don’t tell the swimmer what the TT is set at, and make them get in the ‘on your marks’ position on the blocks. Slide the TT into the cap, and sit back and watch. It’s actually fun when you’ve set a few of these to go off at the same time, put them into the caps, and watch everyone react at the same time to NOTHING (on the deck, you’ll not hear anything, you’ll just see everyone TAKE OFF).

Now, the con. The trouble I had initially doing this… with just TWO swimmers, was making sure they both went off at exactly the same time. In the larger practices, I think it would take me quite a while to get 9 or more TTs all going off at the same time. Sure seemed like a simple thing, setting the time, then turning one off, setting a stop watch next to the running one, and quickly turning on the next one RIGHT when the beeps were going off. For some reason, my 2nd TT would initiate its beeps :10 seconds AFTER I turned it on. Of course, then I initiated the start-up process :10 seconds early, and go that one in sync. The trouble is, not all TTs start the same, at least in my experience. So you’ll have to figure out which one works which way, and set it accordingly. Hopefully, Finis will put a sync start system into the NEXT model… so we can all have hundreds of these for our teams, and start them all at the same time. 🙂

Experiment, and enjoy. All in all, I now love my Tempo Trainers EVEN MORE than I did before. ANYTHING that allows creativity to enter into the practice, while at the same time, DEMANDING the swimmers think, and react, is a great tool. Seriously, that it costs only $30 is a HUGE plus.