At a recent swim meet, I noticed several swimmers who were a bit too tentative in taking out the first half of their race. When I talked to them about this, I got two general responses: 1) they weren’t feeling good enough or 2) they knew they were going to die. My response was: so what?

I’ve said it before, but it bears repeating: GREAT races HURT. As swimmers, coaches, and fans of the sport, we see a lot of races on TV and in person. Next time you watch, look at the expressions on the faces of the winners IMMEDIATELY upon their finish… PRIOR to seeing their time or place. What you’ll notice is a simple expression: pain and exhaustion. It’s not until AFTER they’ve realized they’ve accomplished a new goal, or won a race they’ve wanted to win for years, that all the pain disappears. It’s amazing what success does to make pain disappear.

When you’re not feeling up to snuff, especially in the middle of the season, you have to treat that as a test. These races are lessons that can be stored in your memory as either ways to succeed, or ways NOT to fail. All the races prior to the most important one of your season should be treated this way, and none should be cruised through because you’re afraid it’s going to hurt a bit too much.

Take a 200, for instance. Middle-distance races are sometimes the toughest in the middle of the season if you don’t "feel it." It’s too long to crank it out the entire way and hope for a good time. Plus, it’s too short to settle into a consistent pace that has a chance of garnering you a respectful time. This is where a good mix can come in.

First, you should take it out fast enough to give yourself a CHANCE at having a good time. This means, if you’re not in the groove, you’re going to have to force it a bit. Don’t hold back on the first 50 because, if you start off too tentatively, the voice in the back of your head that’s saying "you’re gonna die… you’re gonna die" all of the sudden becomes the voice of reason — and you end up holding back even more. As a result, the first 50 is way too slow to yield a great time, and, basically, the race is about over. You’ve set up a pace that’s tough to overcome.

Sure, there will be instances in which a swimmer goes out slow, and comes back fast. Those cases are rare, however, unless the race was preplanned like that. Also, if that does occur, and it’s odd for that particular swimmer to swim 200s like that, chances are… he or she left A LOT left in the pool. The problem with these kind of races is that they DIDN’T carry enough pain with them to become real learning experiences… they were just NICE swims. Cool… nice… but they’re not the types of races that lead to THE ULTIMATE race at the end of the season. 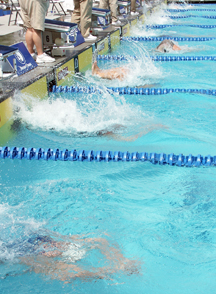 My approach is that, especially when you’re not feeling it, you should force the pace on the first 50 to get INTO the race. THEN… back off a bit to allow for some recovery and — almost — a deep breath before the rest of the race begins. In some instances, the field will pass this swimmer on the second 50, but if this was the plan, then so be it. If our swimmer went out too slow, and had to swim the entire race in "catch-up" mode, there are just too many uncertainties that can happen. Going out REALLY fast on the first 50 at least puts our swimmer into the race, and allows him or her to choose what to do next.

If you look at the splits from most 200s, especially in mid-season meets, you’ll see just about everybody holding back on the 3rd 50 of a 200. Knowing this, where would YOU attack your competition? Here is a good race scenario if everything comes together perfectly:

2nd 50: Back off. Relax. What you’ll be nervous about on this 50 is that you’re going to go way too slow… but you HAVE to back off. Because you’re worried of losing too much pace, almost everyone will hold a nice pace through this 50 because of the fast pace swum on the first 50. Anything will feel too slow if you’re cruising after a fast first 50. In our perfect scenario… this 50 will be the slowest of the race.

3rd 50: If the other swimmers are holding form, some should have passed our swimmer on the second 50, and are now starting to feel the pain. Because they’re worried a bit about the last 50, they begin to back off. Our swimmer, now building out of the easy second 50, begins to catch those near him/her. This psychological edge is HUGE for swimmers, and can instill hope that the swimmer will win this race.

4th 50: If the swimmer has done all things correctly to this point, she is IN the race, not totally dead, but still hurting a bit. This last 50 is where athletes and champions are made. The entire thing hurts. It’s your HEART that gets you home, plus the fact that the swimmer is in a position to win. Not having to overcome an insurmountable lead because they went out too slow, or hang on for dear life because they went out too fast… she experiences a well-planned race strategy that has given her an opportunity to be IN the race. 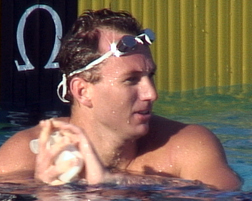 While no race strategy is ever fool proof, having NO race strategy is just foolish. You can’t swim any any race, at any time of the season, and HOPE that things will work out. You have a finite number of opportunities to learn the perfect race strategy prior to the championship season, so you HAVE to make the most of every race… AND… you have to VARY your strategy.

What I’ve proposed here is one way to swim a 200. There are many. There are also many races that someone will have to swim at a meet, which means there will be many race strategies during any meet. When you’re a coach, trying to remember which strategy works for which swimmer at what point in the season based on the type of training THAT swimmer has done and the effort they’ve put INTO that training… means… it’s TOUGH being a coach. Parent’s reading this should also understand the pressure on the coach to remember all the variables that go into talking to your swimmer prior to each race… and how many swimmers have to be cared for in this fashion.

Unfortunately, for swimmers, ultimately, this is going to rest on YOUR shoulders (as usual). YOU have to present your coach with a race strategy. YOU have to discuss this with your coach prior to the race, or meet. Remember that the coach will have 20 other athletes trying to talk to him or her prior to their races… so this isn’t something to have a long discussion about right before you head up to the blocks. Even if, for some reason, you can’t talk to the coach prior to the race, have a strategy going into the race, and discuss it with your coach AFTER the race. Determine if this was something you should think about trying again (all strategies should be tried a few times), or if you should look for a new way. If the coach knows you were trying a particular strategy, then even a poor time isn’t bad… you’ve just discovered how NOT to swim a race.

All in all, you must be BRAVE to try new ways to swim races, and you must understand that in order to find JUST the right way for you to swim a race, you’re going to have to experience some pain. It goes with the territory of being an athlete. If you want that pain to go away sooner… figure out the perfect race strategy for you, and win all your races. It’s amazing how fast the pain goes away through success.