Seems like all my old friends are writing books. I got this email today, and even though MANY of my old teammates (and even other Southeastern Conference friends) will give me a hard time, how can we NOT want to read this book? Those of us who swam against Ray have to at least remember how much we did enjoy winning. If the man didn’t stand for something, competing with him wouldn’t have meant anything. Personally, Ray was always very nice to me… I really can’t figure out why, since I was the second member of my family to swim for Alabama, and compete directly with him. I encourage you all to pick up a copy of this book, and read about what made coaches great back then. I, for one, am looking forward to reading it.

The book is a celebration of Ray’s life, from the backwoods of Highland County, VA, from bib overalls and a one-room school through an often-interrupted college experience, to his National AAU all-around title as a track athlete, through a spectacular 40 years of coaching, to the International Swimming Hall of Fame and into a not-so-golden retirement. 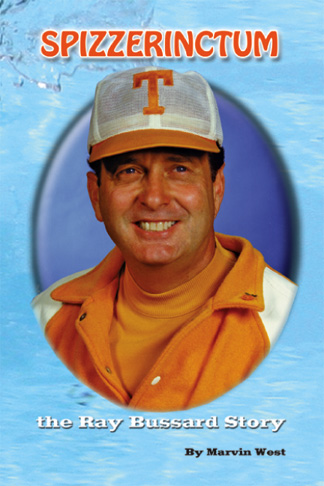 There are stories about Bussard as a great bear hunter, as a caddy at an exclusive resort and as a high school coach with players older than he was. There are stories about his "war effort," several leaps of faith, about his association with golfing great Sam Snead, about a lucky green suit that lost its charm and a second-place trophy that ended up in 45 pieces.

Admiral Skip Bowman tells about quoting Bussard to hundreds of sailors and about using Bussard standards to evaluate Navy officers seeking promotions. Dozens of former athletes have strong opinions, generally good, about how the coach affected their lives.

The book says it was a shocking upset when Bussard got the Tennessee job. What he did at UT and how he did it was even more shocking. Time after time he beat the odds and exceeded expectations.

His Volunteers dominated the Southeastern Conference for a decade and won 85 consecutive dual meets. Bussard was twice national coach of the year. He was a coach at the 1984 Olympics. He was generally recognized as one of the world’s best sprint and turn teachers. His training
techniques were challenged, debated, cursed, copied and acclaimed.

The book has recruiting and developing stories about David Edgar, John Trembley and a host of Volunteers. It tells about Tennessee traditions and mind games, about coonskin caps and pouring Tennessee water into opponents’ pools.

The book is not all beautiful balloons and fluffy cotton candy. Dr. Edward J. Boling, former president of the University of Tennessee, says Bussard could turn most any little issue into a full-scale war. Don Gambril, former Alabama swimming coach, says Bussard, of all opponents, was the most fun to beat. One ex-Vol grumbles that the coach never did learn to correctly pronounce his name.

"Spizzerinctum" is a Bussard choice word. He never could spell it but he had some idea of the meaning and was absolutely certain he had some.

Send Page to a Friend