This article is submitted by Paul Reeder, who lives in Columbus, Ohio, and who runs the innovative swim company, Zura. Check out his website at Zura.com.

My daughter, Maren Reeder, was a 9-10 age-group swimmer in the Ohio LSC during the 2005-06 short-course season. Maren is a member of the Worthington Swim Club, a USA Swimming team. Her coaches are Scott Colby and Bernard Vrancken. They have been working with the young swimmers on visualization for the past few years. In October of 2005 Maren received a fifth-grade class assignment to write a poem and draw a picture of something important in your life. She chose to write a poem about what it might take to win a state championship in the 50-yard breaststroke. The Ohio Age Group championships are held every March. 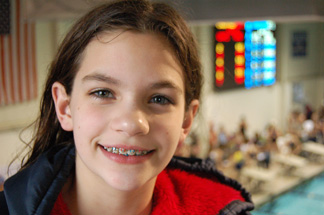 After Maren wrote the poem detailing the step-by-step visualization of swimming and winning the race, she drew a picture of herself in lane 4, winning the race with a time of 36 seconds. At the time, she also drew a picture (that she can not find in her messy room) of her standing on the podium with a prediction of 34.81 as her winning time. The podium picture was taped to the ceiling above the top bunk of her bunk beds, so that she could look at it every night before falling asleep.

Maren turned in her poem and race picture at school. Mrs. Brinegar, her fifth-grade teacher entered the poem and drawing in a creative contest called Reflections in which Maren won a Reflections Award as first place in the school and second in the Worthington School’s district competition.

Every night from October 2005 to March 2006, Maren went to bed, staring up at the coloring of her on the podium, in first place with a winning time of 34.81. As her parents, Lori and I encouraged the positive visualization of her race, but downplayed the projected time. We felt that it might be unrealistic and we did not want to have her disappointed in not winning or missing this unbelievable time. She started off the season with a short course time of 41.1.

By early March, Maren’s 50 breast had improved, and she entered the state meet with a qualifying time of 37.8. In prelims she was seeded third, so she was in the middle lane of the third-to-last heat of the championship seeding. She went 36.7 and qualified second for finals, to be swum that night. The meet was held at the historic Keating Natatorium in Cincinnati, home of the perennial power Cincinnati Marlins and many past Olympians (ask Glenn about Keating). For the first time, I videotaped her race so that she could show the tape at school as part of the spring talent show. She was very inconsistent throughout the race, as any 10-year old is prone to be. After prelims, she congratulated the girl who was seeded first and said that she wanted to go a 34 that night. The girl, a friend of hers from another team in central Ohio, said "there is NO way that you are going to beat me tonight."

After 6 months of visualizing herself winning this race, Maren was not going to take that statement lying down. When we got back to the hotel, I showed her the videotape because she had never seen herself in a race. This really helped her to see what she looked like when she put it all together and what she looked like when she lost focus. Maren spent the next three hours resting and repeating to me, "Did you hear what she said? She thinks that I can’t beat her. Did you hear her?" The race was on! 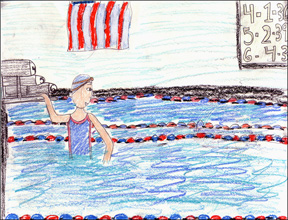 At finals, the 9-10 girls’ 50 breaststroke was the very first final of the very first night of the meet. This is the perfect place for this race — right after warm-ups and the crowd is all revved up for the race. Before the race, I wondered if Maren was repeating her visualization poem in her mind, thinking about the picture taped to her ceiling, and running through what she had seen on the video… or was she simply grinding her teeth over the gauntlet that had been thrown down after prelims. Regardless, when the gun sounded, she took off like she was shot out of a cannon with her hair on fire. This race was all put together as soon as she hit the water. She was leading by over a yard at the turn, and did not look back once as she touched first. Scott Colby was standing at the flags and said later that she was smiling the last three strokes into the wall. We all looked up to the scoreboard to see her time of 34.80, one one-hundredth of a second faster than the time that she predicted 6 months earlier. The announcer exclaimed that she had won in a top-16 time and she just beamed.

Maren went on to compete in 8 more events during the championship meet and tanked almost all of the swims. She placed third in the 100 breaststroke and was just fine with that finish.

We are convinced that her visualizations, poem, drawings, videos, etc., all contributed to her being focused and prepared for that moment in time. She finished the season 10th in the USA National Reportable times and has made a great transition to the 11-12 age group.

A Breaststroke Race
By Maren Reeder

Oh no … It’s true
someone’s ahead
calm down, calm down
no need to loose my head

I think I have strong muscles
and good technique
are they stronger than me?
Or am I just weak?

Whoa, hold on
She is slowing down
or maybe I’m going faster
I’m definitely loosing my frown

My time’s a 36
Yeah! It’s best in state
I wonder why I ever thought
that kid, not me, would celebrate.