As developmental swim coaches and swim instructors, we have certain shared experiences. We all have those days when nothing that we say or do seems to get through to our swimmers. We all have days when there seems to be no forward progress, no improvement, and no sign of anything that might become graceful swimming.

But on other days — the days that keep us going — we realize that our students have absorbed not only everything we’ve every told them about swimming — but also everything we might have inadvertently revealed to them about our character and our approach to teaching and learning.

Last weekend I had one of those "other" days. 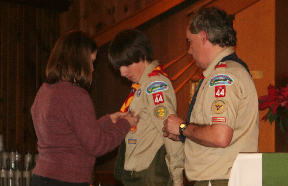 On Sunday, I attended the Court of Honor ceremony at which Aaron received Scouting’s highest honor — the Eagle Scout Award. If you remember, Aaron is the young man who became my student at age 11, when he was afraid to put his face in the water. But at age 11, Aaron had a dream. He wanted to earn his Eagle Scout Award (something that only 5% of Boy Scouts every achieve) and you have to earn the swimming merit badge and the lifesaving merit badge in order to do this.

The only time I could give Aaron his lessons was 5:45 in the morning, but he was undaunted. It took 16 months of determined, dedicated work on Aaron’s part to earn his swimming badge, and another 4 months of work to earn his lifesaving badge, but he got the job done.

Aaron gave me one of those "other" moments when I learned that for his community project, the final requirement for attaining the rank of Eagle, Aaron chose to build a raft for the public beach near his home. He chose this project so that his town could offer a Red Cross lifesaving class  — and because he wanted to give something back to swimming. Remember: This is a kid who wanted nothing to do with water or swimming when I first met him. 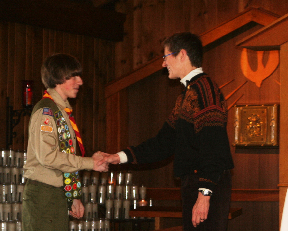 On Sunday, Aaron gave me yet another one of those "other" moments. When Aaron came forward to receive his Eagle Scout Award, I felt so proud of him and his accomplishments. I knew the obstacles and fears he had overcome. I knew the hours, weeks, and months he had spent on learning how to swim. I looked at the list of 43 merit badges he had earned, in subjects ranging from aviation to wilderness survival to electricity, and I marveled at how he had put it all together. I couldn’t wait to greet him after the ceremony and congratulate his efforts.

But it didn’t play out quite that way. After Aaron received his Eagle Scout medal, he presented an award to each of his parents. He then stepped to the podium to talk about what scouting has meant to him. He described the epic canoe journey his troop had taken through the Allagash Wilderness Waterway. Then he talked about his swimming. And then I was stunned when he asked me to come forward. Turns out that an Eagle Scout can present a third award, called the Mentor Award, to someone who has made a significant impact on his life.

I was speechless. The way I see it, I was just doing my job all those mornings at 5:45. Aaron was the one who was doing all the work. But what I want to say to Aaron (besides another THANK YOU), is that I feel so fortunate that he connected with me to learn how to swim. Watching him progress from a shy waterphobe to a confident young man who went out of his way to give something back to swimming, has been one of the most rewarding experiences of my career. His perseverance will always be an inspiration to me. 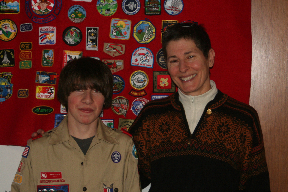