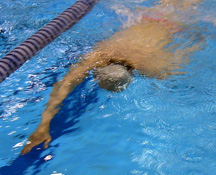 In nearly every culture there is a ceremony for when a boy becomes a man, or when a girl is welcomed into womanhood. Our sport has the same sort of ritual, only it’s not so clear cut or… ceremonial.

The rite of passage, or welcoming into adulthood (in athletic terms), is the acceptance that you must suffer to reach your potential. This suffering isn’t what you put yourself through during a single practice, on a tough set, but rather, the suffering you put yourself through on the 10th practice of the week, in the 8th week of the season, on that tough set you don’t think you can make. 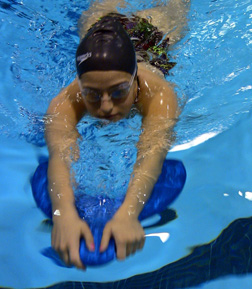 In watching the recent World Championships, we all were again amazed at what Michael Phelps was able to accomplish. I know there are many kids out there thinking how cool it would be to be able to do something like that. That might even utter the infamous line from the Nike commercial, "I wanna be like Mike." The REAL question is… do ya really?

A few years ago, while he was preparing for the 2004 Olympics, there was an interview with Michael, in which he talked about the past few years in which he trained 7 days per week. The last time I checked, there are only 7 days IN a week, so he pretty much had the whole thing covered. There wasn’t a day in which he didn’t touch the water…. for at least a couple YEARS! 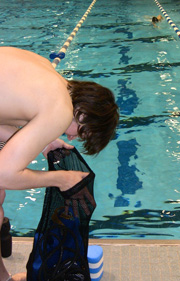 Who is really willing to put in that type of effort?

I read another interview years ago about golfer Fred Couples (most of you won’t know who he is, but he’s still very competitive). Fred had just won a tournament and someone came up to him and said, "I wish I could golf like that." Fred’s response was something like, "I’m sure you could, as long as you stayed on the range until you could barely hold the club up anymore, or stayed on the practice green until the callouses on your fingers split open and started to bleed… like I did." It may have been a bit harsh as a response, but it was absolutely the truth.

Who is really willing to put in that type of effort?

We all have stories about our training, about sets that we made, or how far we went during a given day, or week. The stories that lead to greatness, however, are the ones that speak of suffering not for a day or a week — but over seasons or years.

I was reminded of this recently when my son started running track. About the same time he started track, he was invited to join the local "select" soccer team. Every day after school, he stayed to run track. Being a middle-distance runner, he spent most of his time running 6 to 8 miles around the track, and along the paths around the island where we live. On certain nights he would have about 30 minutes after track practice to grab some food and get to soccer practice. Initially, as a parent, I felt bad for him, trying to imagine how tired he was at soccer practice where he had to keep up with all the older athletes for whom soccer was their only athletic activity for the day. 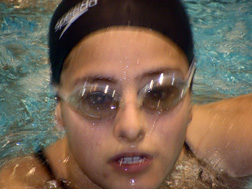 Then I was reminded about MY freshman year in high school. Morning club practice, then school, then high-school practice, then my Mom would drive me to the local Nautilus center where I’d lift weights for about 45 minutes, then we’d drive to club practice to finish the day. Four separate training sessions each day, and I suffered.

During the suffering, you look for every reason not to do it. There’s school work, which is ultimately the MOST important, but you need to learn time management, which is an adult thing. There’s girlfriend/boyfriend, which shouldn’t come into the equation at all, sorry, that’s a social thing, and if you want to be a great athlete they’re going to have to understand (prioritizing your day, doing things that are ultimately productive, this is an adult thing). There’s tiredness, yep, get used to it, it’s pretty much a given that no matter what you’re going through, you’re not the first (this combines time management AND prioritizing, are you spending as much of your day as possible doing things that benefit you, or are you not getting enough rest because you’re wasting time on other things). There’s soreness, which is part of being an athlete because the pain doesn’t necessarily stop when the practice does (also making time to stretch at night, preparing for the next days training).

When you look at what it takes to be a great athlete, you’ll see there are some realities that have to be accepted. Do you really have the TIME to BE a great athlete? Are your school demands or social demands too great for you to dedicate the time it’s going to take to spend being an athlete? Prioritizing, which back in the day was referred to as sacrifice. People used to refer to missing parties, missing dances, not going out, not going to movies, etc., as "sacrifice." Athletes simply have given a higher priority to their sport, and don’t feel that sacrifice at all. You’ll RARELY hear a great athlete talk about what they’ve missed,  but rather what they’ve accomplished. You’ll also hear the great athletes talk about how they’d NEVER do anything different. If you do hear or read that they WOULD have done it differently, I’m going to hazard a guess that if they DID do things differently, you certainly wouldn’t be hearing about them. 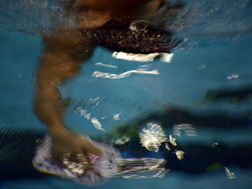 I’ve said for a long time that you don’t have to have the potential to BE an Olympic athlete to live the life of one. The Olympics, or meets close to that level, last just a few days. The preparation to reach that level (or your own personal potential) takes YEARS. When an Olympian and an athlete who has reached his/her potential talk, they can compare stories of the preparation, stories of how they managed their time, handled the pain, balanced their lives to the point they ultimately did…. suffer.

In my opinion, our "rite of passage" into adulthood as athletes is suffering. But it’s a very specific type of suffering. It’s not the suffering placed on us by our coaches but, rather, the suffering we’ve chosen to place on ourselves every day of the week, for years.

To every young athlete struggling with social and athletic goals, I wish you good luck with your decision. Whatever is right for you, will be the choice you make, and this rite of passage is certainly not for everyone. Not choosing it isn’t a failure but, rather, another step into adulthood as you fine-tune your path in the world. Just focus on something, and be great at it.