When young swimmers start to mature, and have a bit more muscle, it’s time to start teaching them to catch more water. Wide-pull breaststroke is a good drill to help start the learning process. 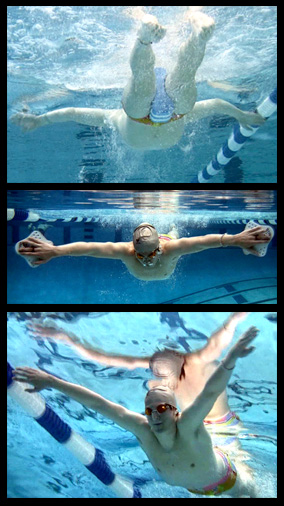 A wide pull allows you not only to connect with more water, but also to connect your upper body to the pull. It’s really about maximizing the amount of water you come into contact with when you’re pulling. While a narrow pull is advantageous to some breaststrokers, a wide pull is advantageous to others. You’ll have to experiment, and figure out which works best for you.

1. This drill involves a three-step progression — but only ONE focus point. Throughout the progression, your one thought and your ONE GOAL is to touch BOTH lane-lines at the same time. It’s best to try this initially for short distances, and if you have several swimmers in your lane you obviously need to limit your swims to 25s, so that everyone can swim down the middle of the lane.

2. The first step in the progression is to do breaststroke pull with a pull buoy… but no paddles. You probably won’t be able to touch the lane-lines, but you should IMAGINE that you can, and you should try your best.

3. The second step is to add paddles. With paddles, you’ll have a better understanding of how that wide press feels, and the power that’s really needed to use this sort of pull.

4. As you press forward into the pull, allow your hands to scull outward toward both lanes. As you reach the widest part of your pull, sweep your hands in and forward through the recovery to a long stroke out front. Initially, you’ll want to do this drill slowly, so you can focus on what you’re trying to do. By slowing down a bit, you build more of a feel for how the arm sweep connects to the movement of the body.

5. Finally, take off the paddles and pull buoy and swim breaststroke — but keep the goal of touching both lane-lines with your fingertips on the outsweep.

There are a few things you’ll feel when you do this:

1. Your timing may feel off. This is normal, and probably indicates you’re going too deep as you extend forward.

2. You’ll feel CAUGHT — as if you’re trying to push yourself UP to air — or as if you’re popping up in the water. This could indicate you’re pushing DOWN rather than sweeping in as the hands come inward.

3. Your elbows will drop well behind the shoulders. This isn’t a problem so long as you’ve recovered narrow, and high enough, with the elbows to avoid the extra resistance this extra pull can create.

4. Work on the timing of the connection between arms and body. The goal is to have the insweep occur just as your body is coming back UP. If you rush the insweep, the connection is lost and you’ll feel awkward.

When you perform this drill correctly, you should feel the stretch all across your chest and through your shoulders. This is REAL connection, and does require some strength to do at speed.