It’s human nature. When people know they’re being watched, they do things better. Of course, there are always exceptions — individuals who do things badly just to get attention — but MOST people like to give the impression that they’re performing at a high level. 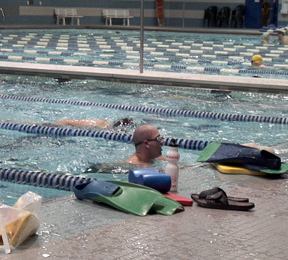 To put this to the test, go to the pool by yourself, and I mean TOTALLY by yourself (except for the lifeguard). Take one of the toughest practices you’ve had all season and start doing it… by yourself. Make all the intervals, make all the goal times, do two-handed turns and streamline pushoffs, take 5 dolphin kicks off each wall, don’t breathe out of your turns, don’t breathe inside the flags on your finish, and figure out exactly when you’re supposed to leave on each repeat. See if your intensity, performance, and execution are equal to what you accomplished during practice when Coach was on deck. Chances are, your performance levels won’t match.

I have very specific memories of being watched when I was in training. After I moved away from home (with my Mom) to train with the Cincinnati Marlins, I saw my Dad only on weekends. He would drive from Cleveland to Cincinnati to see us. The Marlins, however, had a policy that no parents could watch practice. Because of our unique situation, my Dad was allowed to watch Saturday morning practice. He would sit in the upstairs balcony, in the dark so as not to distract the swimmers. He would enter the building, sneak behind the bleachers, go up the stairs, and sit. The coaches knew he was there. I knew he was there. But unless you peered into the shadows, nobody else even noticed.

Saturday morning was our 11th practice of the week, and it was always TOUGH. But because I knew there was a special pair of eyes watching nobody else in that pool but ME, those Saturday morning practices were my best of the week. They were brutally hard, but I had to do things right. My Mom and Dad had sacrificed a lot to allow me to train away from home, and this was my chance to repay my Dad, to give him a feeling that it was all worth it… if even for that one practice a week. 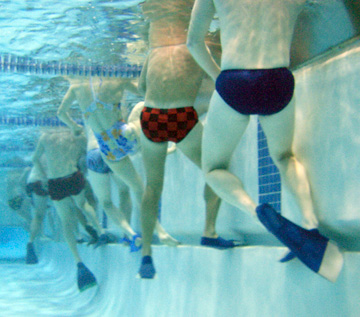 After I made the Olympic Team, and went off to college, I slipped into a slight state of satisfaction, and lost a bit of my edge. I started to slack off a bit as I blurred into a great team, and was kind of hidden by the other swimmers. It was easy to get away with little things and to blend in. I started doing one-hand turns, and finishing poorly… typical stuff. One day, Denny Pursley, my coach from Cincinnati and an Alabama alum, showed up on deck after practice had started. I didn’t know he was coming and I IMMEDIATELY panicked. How long had he been on deck? WHAT had he seen me do… or NOT do? The moment I noticed him, my performance became sharper. No more smiling and joking on the kick set; I was CRANKING. My turns and underwater pulls got cleaner, my effort level stepped up a notch, and… heck… even my POSTURE improved. This was simply because I knew that someone I respected was watching ME, and it was kinda scary.

I learned a lot that day, and thought about how I would train if not just Denny but also my Dad, my Mom, and my brothers were watching me train. Something clicked that day. I made a decision that every time I got in the water, I would imagine I was being watched by someone I REALLY cared about. It was like a game, it was all in my head, but I actually started looking to see if anyone was watching.

To truly excel, you must put yourself in THE situation on a daily basis, convincing your mind and body that what you’re doing is important to the point that your adrenaline starts flowing, your heart rate elevates, and you’re a bit nervous for the next swim to begin. In your mind, you’ve determined that the person in the next lane, no matter WHAT stroke he’s doing, is going to get BEAT. 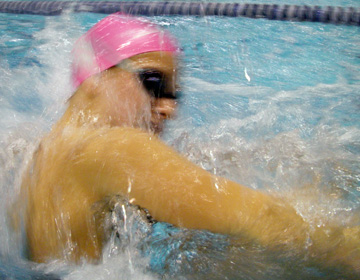 There are many tricks for putting yourself in the moment. For me, the most effective trick was to imagine someone special watching me. I needed to do everything right, and make them proud of the effort I was putting in. It wasn’t about the pressure of winning. It was about proving to them that I had done EVERYTHING humanly possible on that day, in that swim, to make them proud. If I did that, the rest took care of itself.

Think of the person who means the most to you in the entire world, someone you truly love and respect, someone you strive to make happy, and imagine him or her quietly watching from the stands. How would your turns be? Would you talk back to your coach? Would you be the ONE swimmer complaining that the interval is too hard? Or would you be the one swimmer who welcomes the challenge and pulls your teammates along with you? Would you fight to win, to go faster, time after time after time? Or would you go through the motions, hoping your secret spectator didn’t know enough about the sport to think you were really trying?

The choice, as always, is yours. Sometimes, all it takes is a little imagination to push yourself into a new zone and a higher level of performance.