When we’re given the opportunity to participate in an event that can benefit others, sometimes we have to JUMP at that opportunity, and JUMP is the key word in this event. 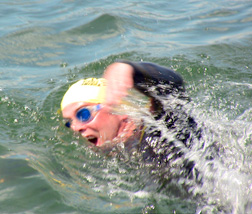 Swim Across America (SAA) is one of the longest-running, and most successful "swimming" fundraising events in history. The main objective of SAA is to raise funds for cancer research. SAA events take place at various locations across the country, and the proceeds go to specific clinics and hospitals in the host area. Proceeds from SAA-Boston go to the Perini Clinic at Dana Farber Hospital in Boston.

In the days before the event, the organizers sent repeated reminders to bring a wetsuit. Not being an avid open water swimmer, I dug out the wetsuit, scraped off the cobwebs and tossed it in the trunk. Little did I know how important it would be to me.

On Thursday, Craig Beardsley and I woke around 5 AM and drove from New Jersey to Boston, heading straight to Dana Farber. After introductions and time to catch up with old friends, we talked about the reasons everyone had come together. Many of us have seen firsthand the effects of cancer, so this event has special meaning for us.

We then proceeded to the Perini Clinic to visit with children who were receiving treatment for various types of cancer. That day was by far the most meaningful, and moving, day I’ve had in a long time. Any fear of cold water, open water, or pain from swimming over the next few days, quickly went away as we spent time talking to kids ranging from 5 to 16 years old. What they were going through was MUCH rougher than anything we would experience out in Boston Harbor. Our only goal that morning was to make them smile and laugh. 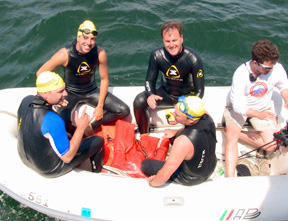 Janel Jorgenson brought her Olympic silver medal, and it was passed around and worn by many kids. Eric Wunderlich helped a young girl paste stars on a page, and then laughed with her as they washed glue off both their hands. Carlton Bruner drew whales, sharks, and fish on the sides of caps with another child, and Craig and I were busy making fools of ourselves, as we passed out T-shirts to anyone who came by.

On Thurday night we attended a reception and silent auction, and I’m pleased to report that the Go Swim DVD donation brought in several hundred dollars. I was happy that we at least got some bids!

The "swim" was a 22-mile relay around Boston Harbor. We started at 7 AM Friday morning, and this is where JUMP comes in. We didn’t really have any opportunity to feel, or acclimate ourselves to the water. As the rest of the swimmers boarded a couple of beautiful boats, the "Olympians" had the honor of getting the event started. Our swim consisted of the initial jump off the pier into what we IMMEDIATELY realized was 55-degree (F) water. We all sprinted to get used to the water, but our awareness of the cold was QUICKLY replaced by our awareness of the JELLYS. In all my life, I’ve NEVER seen so many jellyfish. Carlton Bruner had the creepiest alien encounter: As he lifted his head to sight where he was going, a jellyfish landed squarely in his face and he pushed forward into it. THAT will wake you up. Personally, I only got a handful of jelly as I reached forward, but the constant waves of them scraping against your body made you thank your stars for that wetsuit… let alone the cold water. 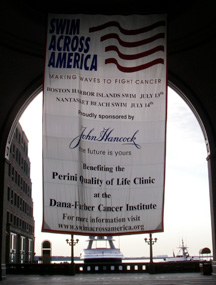 As with all of these events, there are stints of fun, boredom, and much swimming. We had a total of 70 swimmers on two boats, alternating groups of 6 to 8 swimmers going for 15- 20-minute stints. The swimming wasn’t the tough part; the cold water was. When we left the harbor and entered the ocean, the water temperature dropped even more. While it was a beautiful day, the water edged closer to 50 degrees. This is when the stories of "last year" started. In 2006, SAA Boston was held on a cold, rainy day with the water dipping into the 40s… YEAH… THAT’S the way to sell a return visit! Tim McKee, a double Olympian and staple at the SAA events, showed up with a broken arm, but that didn’t stop him from wrapping it up and participating in the final leg of the swim.

All in all it was a tremendous day, and it was now time for rest. There was no party on Friday. After 12 hours of swimming and boat-riding, we were all exhausting. And… we had another swim to get ready for. 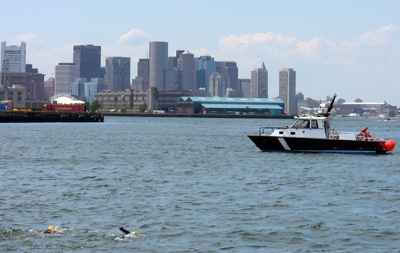 Saturday morning came, and a decision had to be made: Would I do a one-mile swim or a half-mile swim? Since Carlton was one of the greatest US distance swimmers in history, he HAD no choice; he was required to do the mile. Eric Wunderlich, being much younger than Craig or me, and obviously a training machine, also opted for the mile. When Craig and I were assured that there was plenty of representation in the mile, we felt it out duty to make sure the older guys would be represented in the half mile, so we chose that one. Janel, who had to organize and work throughout the weekend, also opted for the half. NOW IT WAS COLD! This swim was in the ocean, and although the water was glass smooth, you wanted to keep moving to stay warm. It was a great swim, with Janel announcing the final tally for the weekend and making the presentation to Dana Farber Hospital. The Boston event had raised $300,000, which would go to the ultimate cause… curing cancer.

The drive home was long (4 hours to New Jersey and another 4 to Maryland), but there could be no complaining. Our talk and thoughts turned to those kids, and to our family members and friends who have been — or are — affected by cancer. The entire event was emotionally and physically draining but, ultimately, it was fulfilling to be allowed to participate in an event like this. It attracts some truly great people.

I encourage you to find a Swim Across America near you, and to get involved. While I know we all have our own fund-raising events for teams, we should chose a valid cause or charity to remind us that the world isn’t just about swimming. I’m glad the one I got involved with is a SWIM-type event… had it been RUN Across America, I’d be in BIG trouble.

You can still contribute to this swim by clicking on this link.