The other day, a coaching friend was telling me about a comment a swimmer had made. In trying to get a point across to an athlete, the coach related a story she had read about one of our current Olympic swimmers. The swimmer’s response was, "But I don’t WANT to be an Olympian." 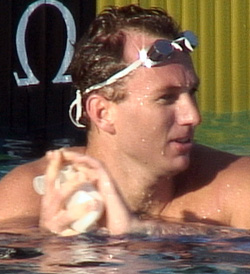 When I heard this, two emotions struck me. I was upset that an athlete would respond to a coach’s attempt at inspiration with such an immediate and negative response. But then I started laughing, thinking… don’t worry, you WON’T be.

First, I want to set the record straight about the whole Olympian thing. My thoughts on how people actually become Olympians is that it’s basically a crap shoot — or at least a long string of coincidences, kind of like "the perfect storm." Was someone with great genes for swimming exposed to the sport young enough to gain the necessary technical understanding? Were they born in a part of the country where swimming was popular and where pools, teams, coaches, and top-level competition were readily available? Were they exposed in such a way that allowed them to develop a love and passion for the sport? Were they exposed to the proper coaching at just the right time, physiologically, to maximize the athlete’s strength, flexibility, and "feel" necessary to excel at that sport? Did they have the right mental attitude to match their physical attributes? Did they time their taper exactly right so that as they stepped to the blocks at Olympic Trials they knew they were at the absolute peak of their potential? 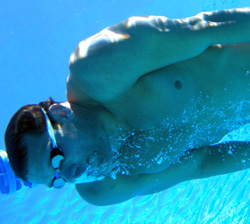 Let’s be honest. The massive percentage of people who read this will NEVER be Olympians. If we, as coaches and teachers, sought to work ONLY with Olympians, we’d all be deeply unhappy. Most coaches and teachers want the same thing… for athletes to improve, enjoy, and excel. We want to teach lessons that we know will benefit athletes in the future activities in their lives. It doesn’t take a genius to walk into a pool of swimmers going 100s on the 1:45, and KNOW you’re not watching Olympic athletes. But it also doesn’t take a genius to tell when an athlete is truly doing her best to improve and to excel. It’s easy to recognize and to applaud that kind of effort. And, for most swimmers, that’s what the daily routine is all about. When a coach tells stories about Olympians, it’s not to MAKE athletes Olympians. It’s to help them understand what it takes to excel — at whatever level that may be. They do it to help their athletes understand WHY and HOW Olympians become Olympians, and what certain things they’ve done to reach that level… to reach their potential. Besides that, people are generally motivated by hearing stores about someone who’s overcome all the odds and the obstacles to achieve. 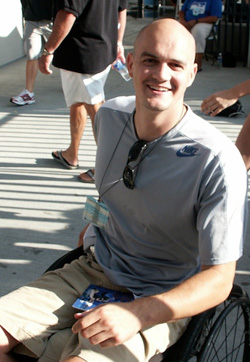 Next week, I plan to be inspired, motivated, and humbled… just by going to the pool. Next week I’m going to watch my friend Dave Denniston in a swim meet. I don’t know how he’s going to do or how fast he’s going to swim, but seeing him in a suit is going to be a very emotional experience for MANY people. It takes me WAY back to a place I’ve not revisited for a long time. When I was a young swimmer, at a summer club meet, I watched my older brother Kyle hop up to the blocks, climb up, and swim a race… with one leg. The courage it took for him to swim that one race, and just to get to the blocks, makes EVERYTHING I ever did in swimming pale in comparison… just as watching Dave next week will. THOSE are Olympian efforts! (and, yes, we’re cheering for Dave to BE an Olympian).

There are THOUSANDS of swimmers out there every day, training like Olympians. Working their hearts out, finishing at every wall, doing two-handed turns, not accepting that where they are today is where they’re going to end up. They’re living the same life as the Olympians, that same committed, dedicated, and driven life the top athletes live, and they’re going to excel in the "real" world because of that drive. Energy exudes from those individuals, and teammates feed off of it. Mary T. Meagher likes to tell a story of Nancy Nemit, a teammate back in Cincinnati who worked out with her, and pushed her every day. Nancy didn’t make the Olympic team, but pushed Mary T. to make it.

When an athlete says, "I don’t want to be an Olympian," they’ve accepted that they are not one of the chosen few who will win the crap shoot of athletic selection. They’ve also indicated that they just don’t get the point of athletics — that you’re ultimately not judged on what races you won, or teams you made, or even times you had… but on how hard you tried, and how close you got to your potential. 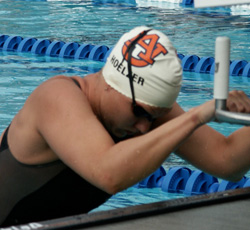 I was at a pool last week, visiting with a coach who’s been around a long time. I heard him tell one of his swimmers that I was one of the most dangerous swimmers on the last 50 of a 200 breast. As an old guy, I was flattered he still remembered me, but more flattered that he remembered how I swam, and that I was dangerous because I had trained enough to survive until that last 50… and still be in the race. We didn’t talk about races won or lost, just that he remembered I was a tough racer. That meant more to me than anything else he could have said.

I’ve written on the site before words to the effect, "live like an Olympian." There isn’t some special pain, effort, or nervous feeling reserved for Olympic athletes. They don’t have shorter commutes to the pool, or read their homework faster. Contrary to popular belief, most Olympians don’t have private chefs. They simply CHOOSE healthier foods. They don’t have special clocks that let them sleep longer. They CHOOSE to go to bed earlier to get enough sleep. Their life of excelling is just that… a LIFE… and what we all share with them is that we have the opportunity to CHOOSE.

Even if we know, logically, we’ll never be Olympians, we can all strive to live like one.