By Go Swim rules, the title of this article ALONE gets me 20 push-ups, and I figure by the time I’m done writing this, there’s gonna be a LOT more where that came from. But I’m willing to pay the price for my friends (I’ll do the push-ups after my meet this weekend). 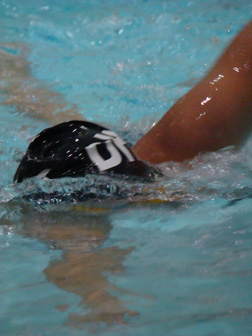 For years, at our summer camps, we’ve held swimmers AND coaches to a standard policy of positive thinking. We do this to encourage everyone to stop reacting to things with an instinctive, negative response, and to start thinking like athletes. The rule is simple: If anyone says "CAN’T" or "HATE," s/he must jump out of the pool (or drop to the deck if it’s a coach) and perform 10 push-ups. While it doesn’t sound like a big deal, it does stop swimmers from hearing a set, and responding with an automatic, "I hate that" or, "I can’t do that."

I instituted this policy many years ago when I started coaching. As coaches, we strive to give interesting and challenging sets that inspire, motivate, teach, and intrigue our swimmers. Every once in a while, however, the necessary 10 x 400 creeps in. Or how about the 10 x 200 fly? Come on, admit it. Many of you read those sets and instinctively groaned on the inside. Not yet? How about 3 x 1000 or the ever-fun 100 x 100? Whatever your set of choice is, as athletes, you’ll eventually be asked to do something you don’t want to do. It’s the coaches JOB to get you to do things you don’t want to do. If all your sets at practice were things that felt good, were smooth and easy, and you were always in control… then you wouldn’t really be training, would you?

As a coach, nothing deflates me more than spending time and thought to write practices that I, as an athlete, would have appreciated, only to be met with comments of "Ughhh… I hate that," when I give it to a group of swimmers.

In designing a practice, my goal is to NOT write standard sets, but to create sets that make swimmers think, that will probably hurt, and that will be challenging and difficult to complete. Even the standard 10 x anything is a challenge IF the athlete meets it head on — with the understanding that this one set, this next task presented to him/her isn’t an assignment, but rather an opportunity. That set will NEVER be here again. The chance to do it well is lost. The opportunity for that set to move you closer to your goals on that day is gone.

Athletes, especially swimmers, sometimes feel that because they swim 8, 9, or 11 times a week, there is always plenty of time to have a good practice. Because there are SO many practices, they can pick and choose the ones they like and the ones where they want to work hard. Because of that, too often when a set that isn’t a favorite comes up, those nasty words creep out… or instinctively FALL out of their mouths.

When presented with a new set, a new interval, or something that is DESIGNED to be an extreme challenge, that negative thought too often is the first one that comes in, "I can’t do that." Just because you’ve never done something before doesn’t mean you’ll not be able to do it TODAY. Maybe TODAY IS THE DAY! Just maybe. Or, if you’re unable to complete the ENTIRE set… how much CAN you do?

Case in point. Let’s say your BEST sendoff interval to date for 10 x 100 free is 1:10. Coach stands over your lane and says… "OK, group, we’re going 10 x 100 on 1:05… GET AFTER IT!" More than likely, your FIRST response is panic, or fear, or a sinking feeling that failure is inevitable. That’s instinct. And while it’s not good, it’s not bad; either. It’s human nature. As an athlete, you have to combat that. You have to talk yourself IN to accomplishment, and replacing the word CAN’T with the word CAN is the first step toward maybe… just maybe… meeting the challenge of this set.

Try it now. I dare you to say the words "I CAN DO IT" with a negative connotation. You can frown, furl your brow, grit your teeth, do whatever you think you need to do, but I bet you will not be able to turn "I CAN DO THAT!" into a negative-sounding phrase. Can’t do it can you? (DOH… 10 MORE!) Try this experiment when thinking of 10 x 200 butterfly: Say, "I LOVE THAT SET!" Come on, more negativity this time… "I LOVE THAT SET!" Tough to be negative when you say that, isn’t it?

When a team adopts this type of philosophy, it’s actually very fun. While it’s not really like tattling, it’s fun to watch an entire lane erupt in laughter and point at a lanemate screaming… "HE SAID THE "H" WORD!" When done with the proper understanding, the swimmer will realize the word just popped out, and s/he will hop out, do the 10 push-ups, and hop back in the lane. It actually becomes contagious and, in a very simplistic way, begins a more positive atmosphere to train in. 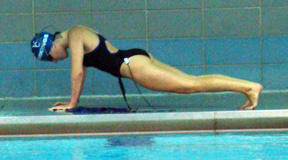 Now, I’m always presented with challenges from swimmers on this one. Do statements such as, "I’m unable to accomplish this" or "I really don’t like doing this set" still warrant a push-up penalty? No. While they don’t thrill me, it’s not instinctual to say those sentences. They don’t just come out, they’re thought out, and that’s really what it’s all about.

Life is filled with things we don’t like to do, and it’s been said that successful people are the ones who DO the things they don’t like to do, but NEED to do. I mean, heck… sometimes I HATE trying to come up with an article, or I CAN’T think up a drill or some focus point to make a short video on. Barbara and I will debate whose turn it is to come up with something, and she’ll be typing on the IM screen… "I HATE doing that… I don’t care… I’ll do the push-ups… YOU do the drill." And I’ll write back… "I CAN’T… I’m too busy doing push-ups!" And then we both end up volunteering to do the drill.

OK… I think you get the point. If you can learn to approach every seemingly impossible task with a positive, can-do attitude, you’re well on your way to accomplishing the impossible. If you can learn to view each hurdle as an opportunity for greatness rather than as an obstacle that you’re destined to trip over, then life (or practice) becomes something you look forward to every day. Sometimes our brains and our "self-talk" are our biggest enemies. But with the flick of a switch — by doing something as simple as saying "CAN" every time you want to say "CAN’T" and "LOVE" every time you want to say "HATE," you can talk yourself into just about ANYthing. And it’s not just swimming… it’s life.