This week’s paddle review focuses on a new product from a new player in the equipment field: the A3 Fusion Performance Paddle from All-American Aquatics.

Pick up a pair here.

The A3 Fusion is one of the coolest LOOKING paddles on the market. The two-tone design, which is blue and black for larger hands… green and black for medium-size hands, is very attractive, and the wave-shaped holes are a nice touch. All of our testers wanted to pick these up and try them.

At first glance, the A3 Fusion is pretty basic in its design, with one interesting and unique feature: a soft rubber ring — with holes in it — that surrounds the entire paddle. At first, we wondered what the advantage, or disadvantage, of that ring would be, and we think we’ve come up with a few things.

Best Use of These Paddles:

Because of their design, the A3 Fusion paddles can be used for all strokes. But because they are a bit long from front to back, they’re better suited for freestyle and backstroke. One thing we’re learning from trying many different paddles is that when you’re considering which ones to buy, you should think about which stroke you’ll be doing the most when you’re wearing them. If you’re a breaststroker, like the majority of us here at Go Swim, you might prefer paddles that are flat and square – although the A3s DID work well for breaststroke. If you pull a lot of freestyle or backstroke, you might like a longer paddle, and the A3 Fusion falls into that category.

The smallish size of these paddles means you can pretty much use them any time you want. They’re nice even during warm-up, where you’d usually avoid larger paddles because of the huge resistance some can provide. The A3s are designed to be just barely bigger than your hands, which means they’ll add some resistance, but nothing too overt, which is also nice. The size of your hands will also impact how that rubber edge is used.

How to Use Them:

As with all paddles, you just have to put them on and go swim. It’s pretty simple.

Of course, if you want to use them REALLY well — and explore the fine points — you need to pay attention to what the paddles are encouraging you to do with your hands.

One of our testers swam 2 lengths with the A3s and reported that they TICKLED her hands. The water flowing through the holes was activating the nerves on her palms. She took this to be a GOOD feature, in that the paddles made her more aware of her hands.

Several Masters swimmers tried the paddles and we heard only positive comments…that the paddles were easy to get into, that the curve was matched to the shape of their hand, and that they were very comfortable and "natural" feeling. We also heard no shoulder complaints, and this may have something to do with the large number of holes in the hard part of the paddle and around the rubber edge.

According to the manufacturer, the flow holes around the outside edge serve to "promote a consistent fluid pulling path from catch to finish." This is probably accurate, but we would describe it as feeling that the paddles allowed us to grasp the water a bit without actually holding on… and that the paddles allowed us to push a bit into the pull. At high speed, we could REALLY understand the thing about a consistent fluid pulling path, because at high speed the A3 paddles "gave up" a little of their resistance to allow the hands to travel through the water a bit faster without creating too much stress on the shoulders. 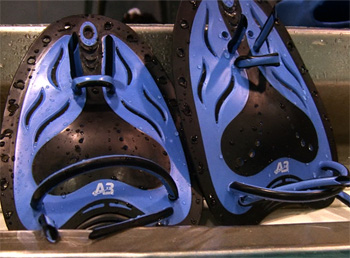 But it was only by ACCIDENT that we discovered the REAL advantage of the A3’s rubber edge. "Accident" is the prime word here, and we’re not sure if the designers at A3 had this in mind, but that rubber gasket is a great protector when you’re swimming in a crowded pool. It’s almost like the bumper on a car, and you can ask the guy swimming next to us the other morning if it works. While the Go Swim crew was pulling breaststroke, we got a bit too close to the laneline and swiped the leg of the guy swimming next door. He barely noticed. Hey… these gaskets really WORK!

Seriously, the A3 Fusion is just a good, all-around paddle. If you wanted only one pair of paddles in your bag, these work well for just about everything. They’re not too big, not too small, they give some propulsion while not giving too much. They form nicely to the hand, and pretty much work for all the strokes. Again, while not the best paddles for breaststroke, they did get us to use a bit shorter pull during the insweep… something many swimmers need help on, so they could be a very good teaching aid for that.

We got good feedback from many other swimmers with these paddles, all pretty much saying one key thing… they really get you to extend well out front. When many people all come back with the same initial response, you know you’re dealing with something that is positive.