How do YOU swim your races? Have you zeroed in on your ultimate race strategy, or are you experimenting? Have you ever just gone for it, with no regard to the second half of a race, or are you too scared of the pain that will ultimately greet you? 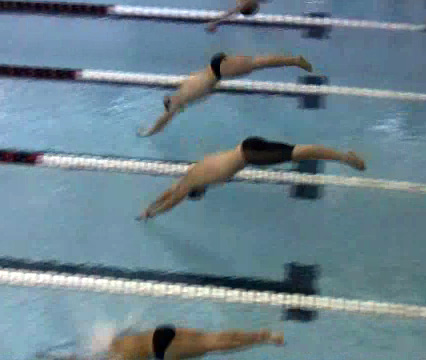 When you look at your races during and entire season, how many different strategies have you tried in each of one? If you swim a race regularly, it’s very easy to fall into a system, a plan, a way of swimming that can get you into a rut or "safe zone." If you’re successful with a race strategy, you’re going to be less apt to try something new, and if you’re worried about winning a race, you’ll also be less apt to put yourself into a situation in which you’ll risk losing in order to try something new. In other words: Are you willing to lose a race mid-season in order to discover if you’re supposed to swim your race a different way?

The faster you want to swim, the more likely you’re going to have to reach a new level of pain acceptance. This is NOT an easy place to go to, and most swimmers try to avoid it at all costs. It’s always so much nicer to feel great at the end of a race… accelerating into the final wall… and looking at the clock to see a nice time. But… if you have lofty goals, and you need to drop considerable time in order to achieve those goals, you’re going to have to try some new things — things that may cause you to fail or, at the least, cause you considerably more pain DURING your races than you’re used to.

Mid-season races are the perfect time to throw caution to the wind, attack the first part of your race, and see what happens. Let’s take an example. If your best time in the 100 breaststroke is 1:07, and you have to go a 1:04 at the end of the season, there will be a minimum time you need to hit at the 50 in order to have a chance at the 1:04. When you went 1:07, chances are good that your first 50 split was around :32. The trouble with that is simple math. Unless you are capable of going :32 on the first AND second 50, you haven’t given yourself a chance to go 1:04. You’re going to run out of time. You’ve got a turn to deal with. You’ve got the piano that’s going to fall on the last 25 (or 12.5) You’ve got the chance that you may not be able to feel your hands on the final 5 to 10 meters. But you KNOW, from doing some simple math, that by the end of the season you need to know what it feels like to go out faster than :32. You need to be USED to that feeling — and know how it makes you feel on the second 50.

The real question is, are you brave enough to try it at mid season? Are you brave enough to look down that pool, and do whatever you can, for as long as you can, to give yourself a chance to reach your goal? If someone unaware of your plan were to watch you race like this, they’d probably think you were not brave, but stupid. They’d see you take it out like gangbusters and think you didn’t have any idea what you were doing, or that you simply overswam your race. It takes a special person not to worry about what others think, or about how you might lose a race you could easily have won if you’d stayed within your comfort zone. It takes bravery to risk so much, for the sheer chance that something special could happened. 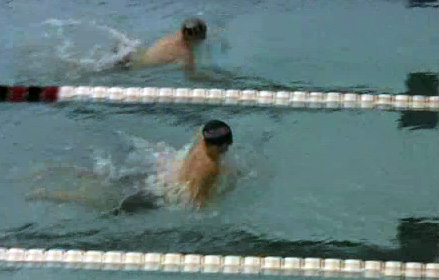 These are choices that swimmers must sort out, even at the highest levels. Take the Olympic Games. Is it more important to go a fast time, or to win? It’s more important to WIN obviously. If you won the Olympics with a slow time (it’s all relative), would anyone really remember? NO. All that matters is that you won. Finals of the Olympic Games, National Championships, State Championships, or even Summer League Championships is NOT the place to experiment with race strategy. It’s the place to implement the strategy that you’ve mastered by trying MANY strategies. Finals of championship meets is the place to do one thing: win. Times no longer matter. But with that said, it USUALLY takes fast times to win ANY meet, which is why you need to be able to understand how to do that. You need to know what it takes for YOU to accomplish the time it’s going to take to win.

Once you’ve targeted a race in which you’re going to go as fast as you can for the first part, you have to approach it with a "what if" attitude. There is a strong chance you’ll be very tired — and slow — on the second half of that race. But "what if" you don’t get tired? What if you’re the type of person who CAN hold a fast pace even when your stroke is falling apart, and you’re losing connection with the water? What if you instinctively start to grab water with a part of your body you’ve not used enough, and shifted responsibility for propulsion from your quickly failing arms, to your kick… or your rotation?

You won’t know until you try.

It takes a very brave person to attempt to go out as fast as they can in a race, JUST to see what happens. It takes an even braver person to do it twice… and to keep doing it, inching the line at which they fall apart closer and closer to the finish until one day they ultimately REACH the goal.

Do the simple math. Study your past races and calculate how many seconds you normally fall off in the second half of your race. Then look at your goal time, and calculate the slowest time at the half-way point that will let you achieve that time. If you have four months to achieve your goal time, what are you waiting for? Try it out now, and see where you are. If you do that, there’s a chance you’ll experience more pain than you’re used to, and there’s a chance that your overall time won’t be your fastest. But you MAY have been on goal pace for 65 meters. After another month of training with your goal in mind, you MAY be on pace for 75 meters. In two months you MAY be on pace for 85 meters. And in four months, you’ll KNOW what it’s supposed to feel like to be on pace for the ENTIRE race… and you won’t be surprised at how the water feels streaming past your body AT that pace. And you MAY be the only one NOT surprised with the result when you REACH your goal, because you were brave enough to test the waters early enough in the season.