Dave Denniston called this set the "Half-Again Test Set." Here’s Dave’s original writeup (thanks, Dave!), followed by a writeup of how it could be used, with a Tempo Trainer, to prepare for a 500 free.

We did this test set at Auburn. It requires a few coaches (or at least watches) to capture the data, and some math to calculate the results. You should do this set after a meet-style warmup, as the main set of the day. 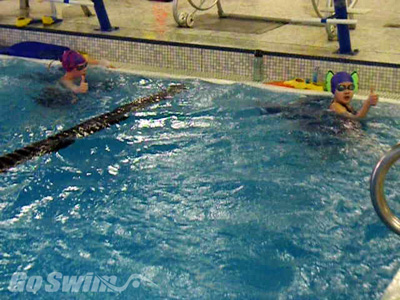 Itï¿½s the swimmerï¿½s job to figure this out before coming to practice. This is so no one will know if you had to use a calculator or not.

The Goal is to hold your time (or faster) for all of your 25s, on the fastest interval you can make. For each 25 on which you miss your time standard, you have to do two more 25s after the set is over.

I missed my time standard on two, so I would have to do four more at the end, all out.

Your timer starts a watch when your feet leave the wall, and stops it when your hand touches.

You are swimming at exactly race pace in this set. The less rest you can take, and still make your times, the better. Your primary goal is to make your times. Taking less rest is a secondary goal. I usually did this set on a thirty-second sendoff. If you add up your eight fastest times and add 7 seconds, you should be right at to a little bit faster than your goal time. If you’re more than a couple seconds faster than your goal time, then you should take less rest next time.

What I like about this set is that YOU get to decide how much rest to take. Youï¿½re in charge, and your success is up to YOU. All the coach has to do is start and stop the watch! When some swimmers are done with the set, they can help time the others.

Half-Again Set for 500 Free
We used this set recently for two 9-year-old swimmers who were trying to make their age-group cut in the 500 free. For each swimmer, we took the cut time and converted it into seconds, then subtracted one second for every turn in the race (19 seconds for 19 turns). We then divided that number by 20 (the number of lengths in a 500). This yields the swimmer’s goal time for each length of the race.

We then set up a Tempo Trainer to beep every 10 seconds. The swimmer’s assignment was 30 X 25. The goal was to beat the Tempo Trainer to the wall on each 25. By setting the TT at 10 seconds, the swimmer had a reality check at midpool on each length. The swimmer could decide how much rest to take between each 25 — either 10, 20, or 30 seconds (measured by the beeps). If the swimmer beat the TT to the wall, she gave the coach a "thumbs up" and the coach kept track of successes and misses. For every missed goal time, the swimmer had to do an extra 25 at the end of the set.

The set worked well. At their next meet, the young boy missed his cut by only half a second (he’s already repeated the set with less rest, to help him get the cut at his next meet). The young girl made her cut by several seconds.