Use your head as your guiding force in sprint freestyle.

The shortest distance between two points is a straight line. In swimming, those two points are the start and finish. And what you need to move between those two points is your body — in the most direct line possible. When races are won or lost by hundredths of a second, there is no time to deviate — even slightly — from a direct line. To be successful, especially in sprint freestyle, you must learn to guide all your energy forward.

When you swim, the line that you travel needs to be centered not only side-to-side but also up and down. Controlling this up-and-down movement is especially important in sprint freestyle, where you need to achieve a fast turnover and an aggressive, early catch. If your stroke is energetic and aggressive, there’s a tendency for more up-and-down movement — known as bouncing — to occur.

In this series of photos, you’ll see how Kara Lynn Joyce, one of the most accomplished sprint freestylers in the US, uses her head to control bounce and to swim in a direct and centered line from start to finish.

As Kara extends forward to initiate her stroke, her eyes are down, with most of her head showing below the surface. This is a comfortable position for Kara because it allows her body to rotate freely and sets her arm up for a great catch. 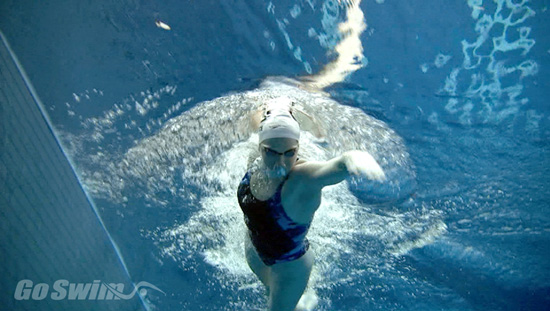 As Kara initiates the catch, her head has not budged. This is in contrast to many young swimmers, who like to attack the catch not only with their arms, but also by lunging or pressing their entire chest and head into the water to follow the hand. Kara avoids this by guiding the fingers and forearm into a very productive position as quickly as possible. 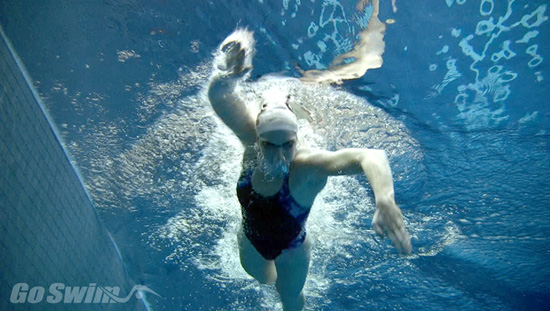 Even as Kara is deep into the catch, and starting to extend her other arm, her head has not shifted, twisted, or lifted. Even though she always has an arm out front, she leads her way down the pool with her head, rather than with her arm. 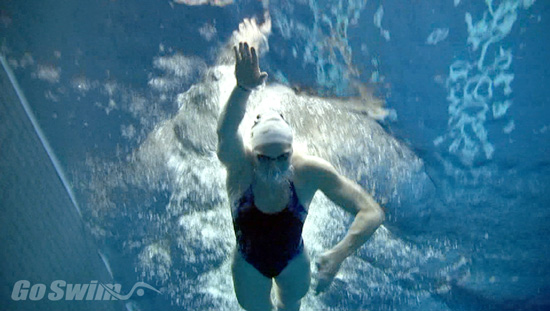 As Kara continues her extension and push, the head remains absolutely stable and centered. There’s no twisting from side to side, and the power she puts into the pull hasn’t impacted her head position at all. 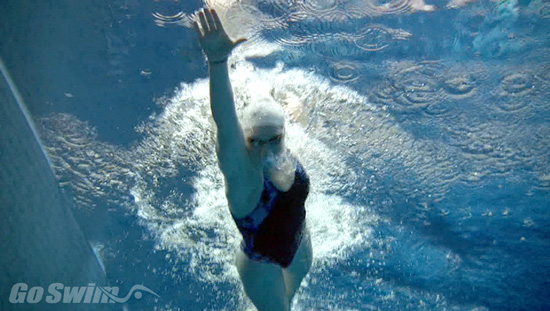 As she reaches full extension, and as her body gets all the way over to its side, Kara’s head still hasn’t moved. This stability continues through her entire stroke cycle. The arms pull and recover, the legs kick constantly, the body rotates from side to side, yet the head stays centered, and serves as the piece that holds everything together. It’s Kara’s head that moves directly down the pool. 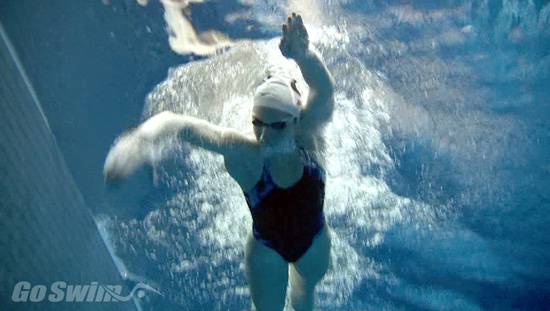 It’s not until Kara needs air that the head begins to move at all. Even in the part of the stroke that causes most swimmers to fall out of balance, Kara executes this move so cleanly and simply that it does nothing to disrupt her laser-like forward movement. 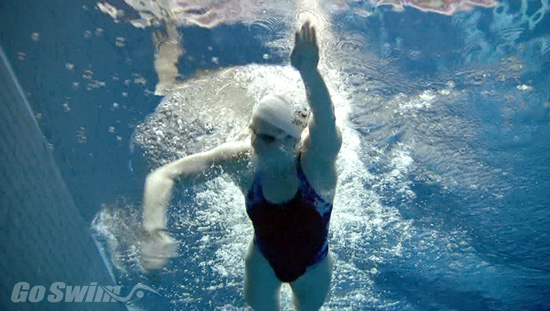 Rather than lift to air, Kara simply turns her head, as if she were simply looking to the side. The smaller the movement in going to air, the less opportunity to introduce unproductive movements. 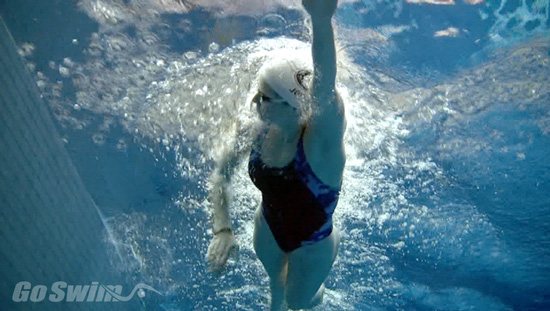 Kara has introduced no extra movement during the breath, in any direction. The head continues to be the stabilizing element of her body, even while it’s turning for air. 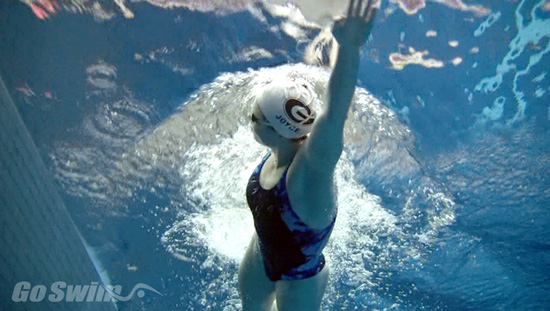 When Kara finally gets her breath, notice how much of her head is showing below the water. If you compare, it’s just about the same amount as when her head is centered with the eyes down.