When it comes to transitioning from backstroke to breaststroke in the IM, Erik Vendtâ€™s technique is definitely New School.Â  Vendt, who swam for Mark Schubert and the University of Southern California, won silver in the 400 IM at the 2000 Olympics and at the 2004 Olympics.Â  Erik is a 6-time national champion, 5-time NCAA champion, and the first American to break 15 minutes in the 1500 LCM freestyle. (He currently holds the US Open record in the 1500, with a time of 14:47.59.)

Erikâ€™s technique is definitely cutting edge.Â  But on his way to the New School, Erik mastered the Old School â€“ the open transition turn â€“ and can show us the fine points of this useful turn.Â Â  (Click here to buy a copy of Erikâ€™s ALL STROKES DVD.)

The New School of thought is that the crossover turn is the fastest way to transition from backstroke to breaststroke in the IM.Â  But not everyone is able to do this complicated turn effectively enough to put it into a race.Â  Young swimmers may have a difficult time doing the crossover turn because of the complex timing and coordination that it requires, and because of the risk of disqualification should they roll over a bit too soon.Â  Older swimmers face the same issues â€“ with the added challenge of long legs!Â  It takes a fair amount of abdominal strength and effort to get the legs over the surface of the water on the crossover turn.Â

For many swimmers, the Old-School transition turn â€“ an open turn — is the way to go.Â  When done correctly, the open turn can be very fast and very competitive.Â  And for the developing swimmer, whether age group or Masters, it offers significant advantages:Â  lots of air and little risk of disqualification.Â

In this series of photos weâ€™ll watch Erik Vendt perform a standard open-turn transition from back to breast. 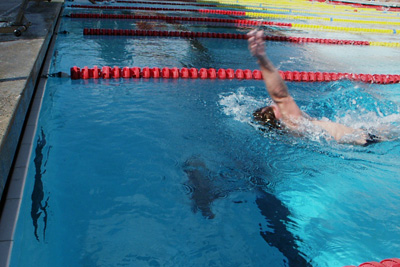 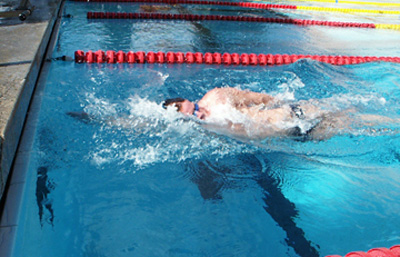 Photo #2:Â  Slide to the Side
On his last stroke, Erik rolls to his side and reaches for the wall.Â  By getting to his side, and by keeping his body horizontal, Erik continues to move forward and to maintain his velocity as he drives for the wall.Â  Notice the extension he gets â€“ and the straight line thatâ€™s formed from his fingertips down along his arm and through the torso and hips.Â 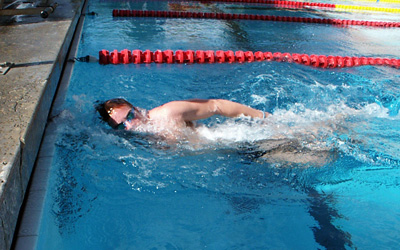 Photo #3: Load the Sling
For a powerful open turn, pretend the wall is a slingshot and your body is the spitball or ammo.Â  You want the spring to be loaded as tightly as possible.Â  And you want your body to be in the tightest ball possible.Â Â  What Erik does is let his momentum carry him into the wall (he loads the spring).Â  As soon as he touches, he begins to draw up his legs into a tight tuck (notice that he stays horizontal as he does this).Â  With momentum still drawing him forward into the wall, he uses his turning hand to redirect that energy into a spin. 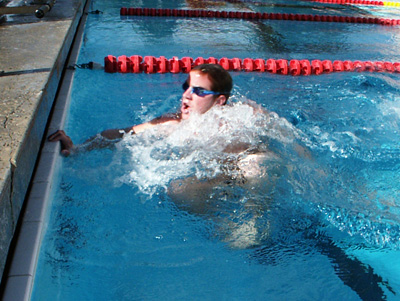 Photo #4: Air!
Here you get a good look at one of the advantages of the open transition turn: AIR!Â  Letâ€™s face it.Â  With a long underwater breaststroke pullout coming up, EVERY swimmer needs oxygen.Â  This is where the open-turn swimmer may lose a little ground to the crossover-turn swimmer, but sometimes the fastest turn isnâ€™t the fastest overall solution to the race.Â  Sometimes OXYGEN is the key.Â  Just make sure that, like Erik, you stay in a tight ball and that you stay low as you tuck and spin.Â  One way that Erik stays compact is by overlapping his feet as he spins his body. 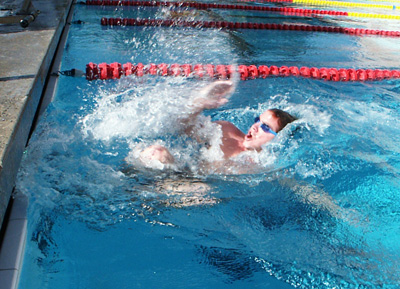 Photo #5: The Drive
As Erikâ€™s feet hit the wall, his turning hand is already released and is heading right past his head, ready to go into streamline.Â  Notice that Erik is still getting that valuable air.Â  Heâ€™s already rotated to his side, so there will be no worries about DQs here.

Sometimes the old is better than the new â€“ or at least itâ€™s worth exploring.Â Â  Before you lock into one type of turn (or start or kick or pull), make sure you look at all the possibilities.Â  Donâ€™t limit yourself.Â  Experiment with many types, and determine which one works best for you.Â  Time yourself at varying distances, and consider the quickness of the turn, and your ability to complete a full breaststroke underwater pull.

You can watch extended video of ALL of Erikâ€™s turns and strokes by picking up a copy of his DVD:Â  GO SWIM ALL STROKES WITH KAITLIN SANDENO & ERIK VENDT.Â  This is Go Swimâ€™s most popular video â€“ a must-have for every swimmer and coach!