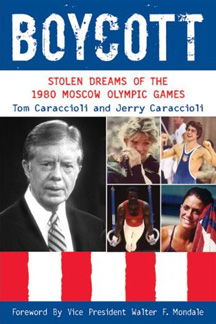 From the foreward written by Vice President Walter F. Mondale, to the definition of the asterisk*, to what I felt was the first accurate representation of what my personal career was all about, this book will make it easier for me to answer the enternal question:

"So, were you really an Olympian?"

This book is called Boycott: Stolen Dreams of the 1980 Moscow Olympic Games

and it’s the story of the 1980 Olympic Boycott.

This book features the personal stories of 18 US athletes who never got to realize their goal of competing in the Olympic Games. Being one of those athletes featured, I can only say that I couldn’t be more proud of the way the Caraccioli brothers portrayed my young life. They hit on the part that was most important to me, and didn’t focus solely on the boycott, my athletics, but rather, the way my Mom and Dad supported me, and the impact of my brother Kyle.

I’m not giving anything else away other than to say, my great friends Craig Beardsley, Sue Walsh and Lisa Buese are also featured in the book, and it’s great to see swimming so well represented.

I urge you to pick up this book from Amazon, and spread the word. Especially when the talk of boycotting the Olympic Games in China has become such big news, I think you’ll see striking similarities in the way the Soviet Union and China were planning on using the Games as a way to ligitimize their style of government. While I certainly don’t agree with either, we can see that the 1980 Boycott, which ultimately only hurt the athletes, had little impact in the downfall of the Soviet empire.