Oxygen is the fuel of swimmers, and no one knows this better than freestyle specialist Erik Vendt.  Erik, who will be competing in his third Olympics in Beijing, was the first American to break 15 minutes in the 1500 LCM Freestyle, and is the current American Record Holder in the 1500 SCM Freestyle and 1000 SCY Freestyle.    Get instant access to this video, along with everything else we’ve ever produced by clicking here.

Erik has spent years perfecting a breathing style that allows him to get lots of clean air without disrupting his rhythm or momentum — a critical skill for distance swimmers who need to breathe OFTEN during a race.  Erik knows the importance of staying low during the breath, but in this series of photos, let’s focus on WHEN he initiates the breath.  The key is to breathe EARLY to get the most air possible. 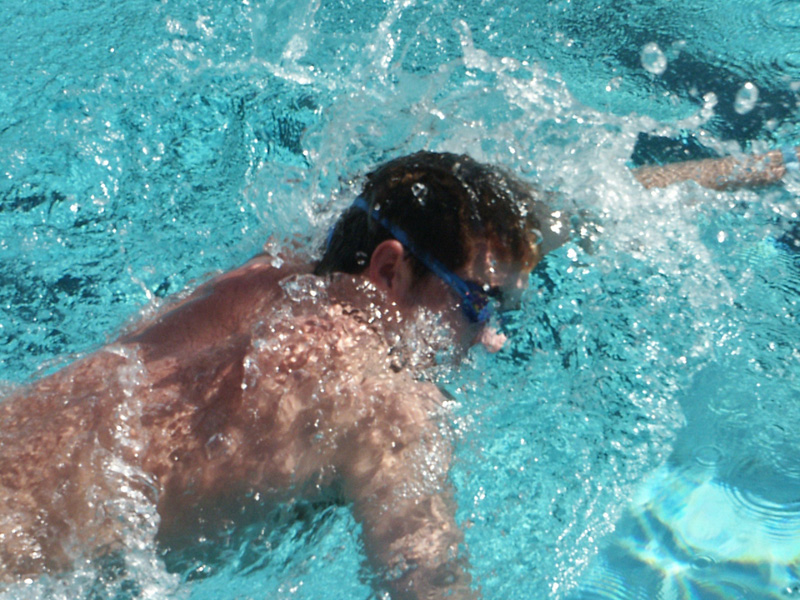 Here you can see that the pulling arm is halfway through its cycle and the head has already begun to turn.  It’s almost as if Erik’s cheek is connected to his shoulder, and as the body rotates, so does the head.  When Erik initiates his pull, there’s no hesitation — he IMMEDIATELY starts to rotate everything to air. 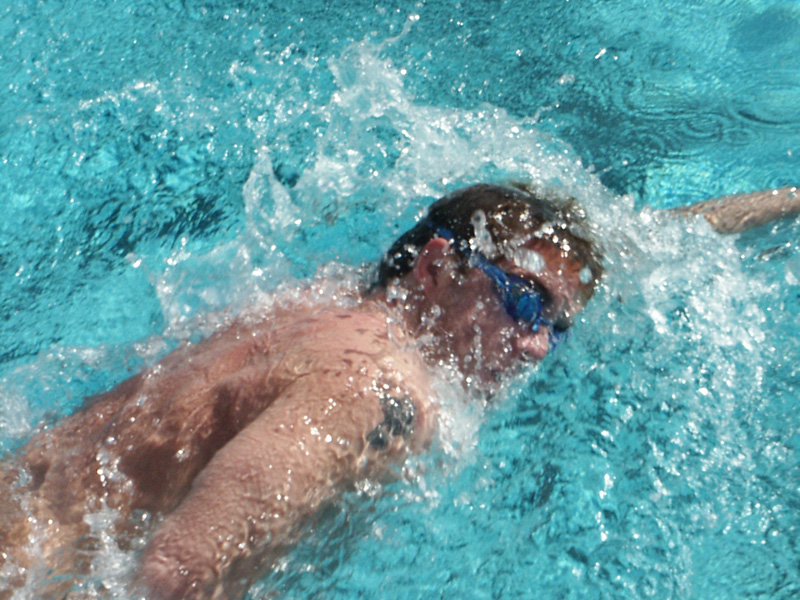 As the arm continues to press, Erik continues to swivel his head to the side.  He doesn’t lift his head — he ROTATES his head along the spine-line axis to make sure his body stays low and balanced. 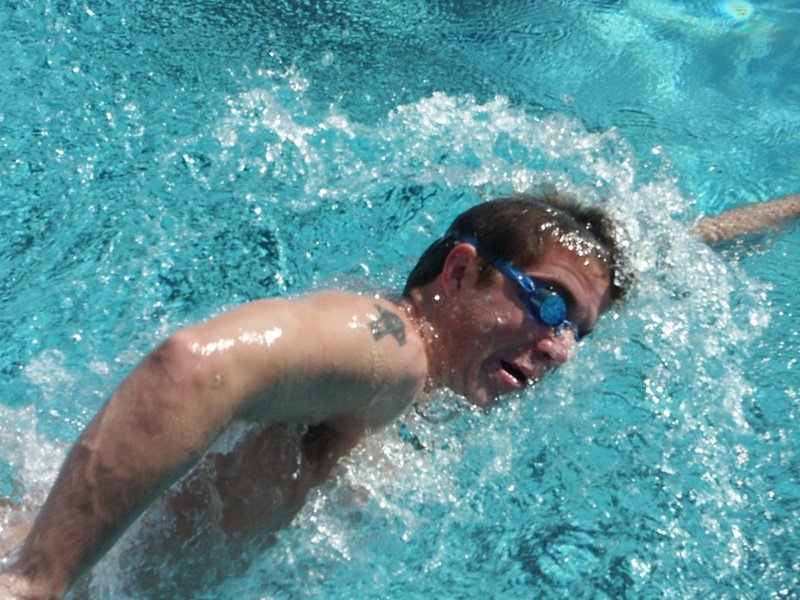 Here you can see that Erik’s pulling arm has just finished its press and is beginning the release and recovery…and Erik is already getting clean air.  He has developed the technique of shifting his mouth to the side to get a clean, clear shot of air. This allows him to get air early, and enables him to stay extremely low during the breath.  It means he doesn’t have to turn his head quite so far to get his air, and this saves him time and energy.  Nearly half his face is still in the water — as well as half his goggles. 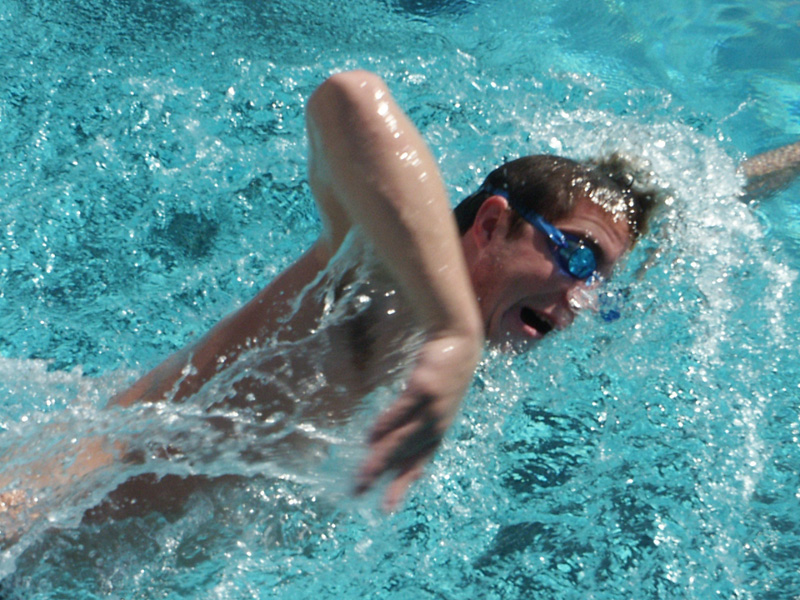 Erik continues to keep half of his face out of the water in order to get as much air as possible during the recovery. 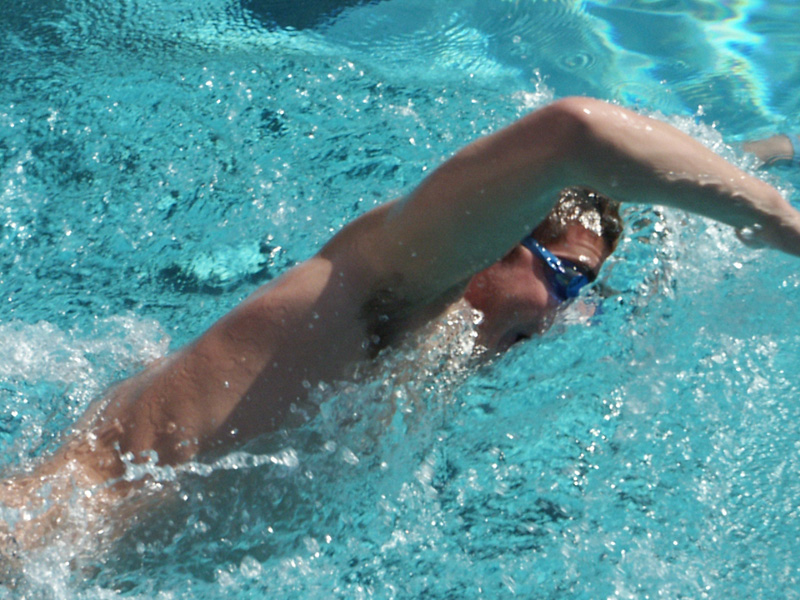 Erik is still breathing in this photo.  He swears to it!  It’s hard to see the pocket of air near his mouth, but you CAN see a sliver of his mouth.  That tiny opening is allowing vital oxygen to travel down to his lungs, even as his rcovering arm gets ready to enter the water.  Erik waits as long as possible to turn his head back to the center for the next stroke.

Breathing EARLY during the stoke cycle and breathing LONG during the stroke cycle allows you to grab as much air as possible on each breath. With all that good air in your lungs, making its way to the blood cells, you’ll have the fuel necessary to keep your splits from dropping off…that is, of course, if you’ve trained correctly!