Demonstrated by Kevin Clements – Pick up the DVD these images were borrowed from here.

Young, aggressive swimmers canÊ¼t WAIT to start racing. Because of that, as coaches and teachers, we have to instruct them the best way to begin a race.   If they’re too aggressive, swimmers can end up dragging their arms through the water on the recovery phase of the first stroke, creating tremendous resistance and slowing the swimmer down. Regaining that momentum creates too much struggle on the first lap of ANY race for the swimmer to really get the maximum benefit from the start. 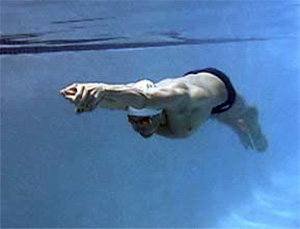 The first photo shows Kevin dolphining to the surface in a perfect streamline position. This picture has enough teaching in it for MANY swimmers, including HOW Kevin locks his hands for his streamline. Throughout this phase of his start, KevinÊ¼s hand are directed straight forward, and donÊ¼t move up and down.  He uses his hands and arms to stabilize his body in moving directly forward. 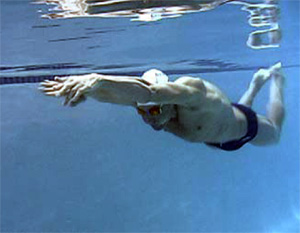 The second photo shows the exact moment in which Kevin begins to separate his hands. You can just see in the reflection from the surface of the water, the depth of his body. At this point, he is still fairly deep, but his momentum is directing him gradually toward the surface. He wants to make sure he begins his pull prior to any part of his body contacting the surface to ensure a perfectly clean first pull.

Kevin’s head has not moved at all out of the position it was in during the streamline, and stays perfectly in line with the rest of his body. 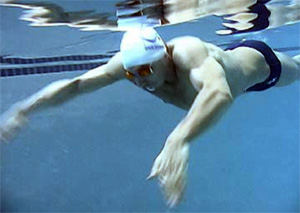 The third photo shows Kevin beginning the powerful part of his pull. ItÊ¼s here that he begins to head UP at a steeper angle. The arms direct him up just a bit, but not so much that he POPS out of the water. ItÊ¼s a natural reaction to the arm pull, and will look drastic only if the swimmer is TOO close to the surface when this pull starts.

Notice that KevinÊ¼s head is still in about the same position. His hips are close to the surface, and the body is in a great position for the first stroke. 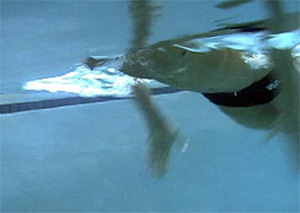 In the forth photo, the key thing to notice is KevinÊ¼s nose. Yes, thatÊ¼s his NOSE leading his body. He keeps his head in perfect alignment with the rest of his body, and concentrates on going JUST over the surface.  HeÊ¼s almost “skimming” his body over the surface of the water, rather than thinking about “flying” over it. HeÊ¼s trying to stay low, so his energy isnÊ¼t directly UP, but not so low that just about his entire head is clearing the water. 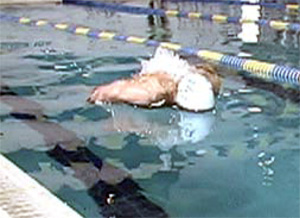 In the above-water shots, notice that Kevin’s shoulders are completely clear of the water, and that his initial breakout is a clean, powerful, and ultimately, FAST first stroke. 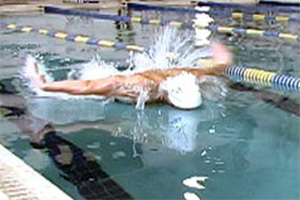 Of course, by FAST, we mean heÊ¼s done a tremendous job of hanging on to the speed from his start for as long as possible, and holds it into his first stroke, then his second… and so on.

Encourage your swimmers to skim the surface on their breakout, rather than blast out.

Watching many swimmers over the past couple weeks, we will continue to focus on breakouts. Why do it: Making sure … READ