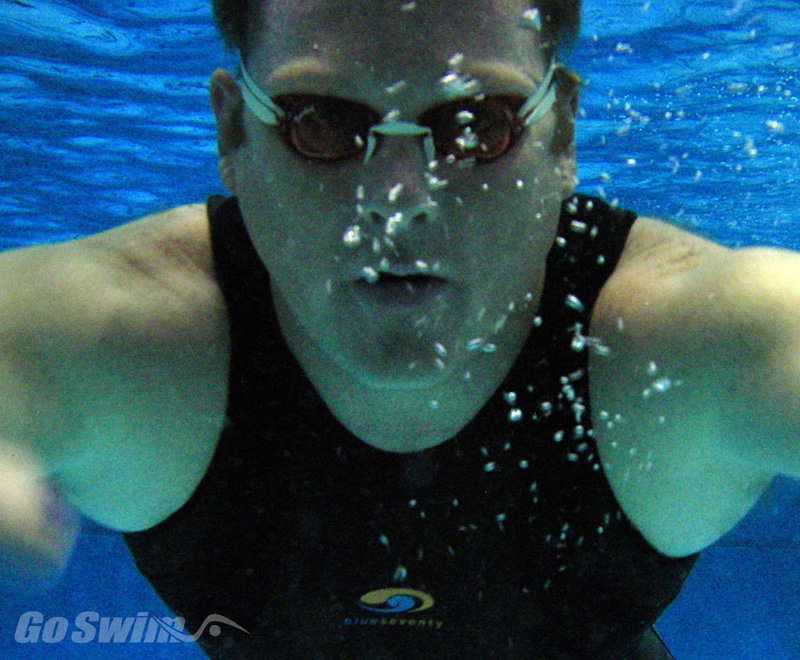 The most recent comments about the suits express the opinion that they’re enabling too many records to be set.  The swimming "purists," as they’ve labeled themselves, are totally against them, stating that they’re going to bankrupt teams and be the end of the sport.  Well, as of today, they’re legal, being used, and people continue to purchase them.  While any article written about these suits is sure to generate controversy, and while we can start a conversation in the forum about the pros and cons of the suits, what I’m giving here is merely a report for those who are going to purchase one of these suits, and what they can expect.

Whenever you spend $400 on ANY swim-related item, you want to make sure it will do certain things.  1) Make you feel better in the water.  2) Make you go FASTER in the water.  3)  Last for more than a few swims.

Again, PURISTS BEWARE!!! SPOILER ALERT!!!  The BlueSeventy will absolutely accomplish the first two items on my short list of three considerations.  Should that be legal?  Forum posts, please.  🙂

Item #3… "last for more than a few swims"…  is a big one for many people, and I’m here to give you a report on what my BlueSeventy has been through over the past 8 months.  I can hear someone already… 8 months… and the suit looks like THAT?!?!?!  Read on…

I took hold of my suit back in May for a Masters meet.  I’ve written about my swims, and I can tell you, the swims were eye opening.  I had SUCH a good time swimming that fast again.  It was fun… and fun is good… right?  I mean, I’m a Masters swimmer now.  It’s not as if I was going to make any money, or get a scholarship.  It was just fun. 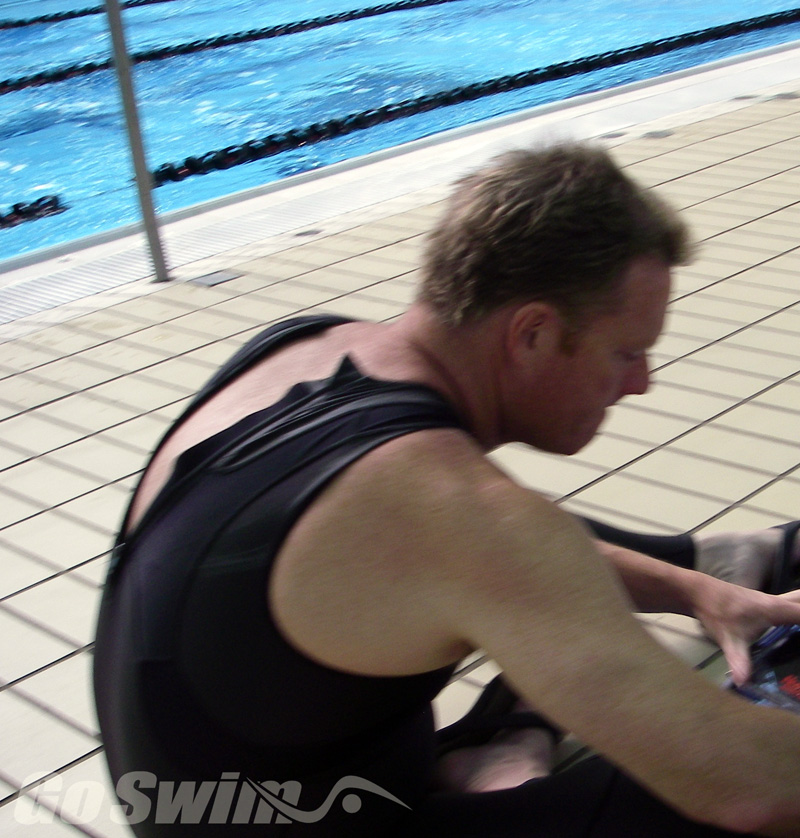 Shortly after that meet, I had an assignment that required me to spend 4-5 hours a day in the water filming.  The water was competitive-level cold, and I wasn’t going to be moving a lot.    I needed to be able to stay under for extended periods without SCUBA gear, so I couldn’t be too buoyant but really was looking for some additional insulation.  BLUESEVENTY to the rescue.

I was in and out of the suit all day… and in and out of hot showers.  I knew the suit was supposed to be used just for swimming fast, but the athletes I was filming were pretty fast, and I had to do something to keep up, so I figured that counted.  Overall the suit was pretty saturated with water from day to day, but dried out well and was ready to go back in service the next day, or later the same day.  What I discovered about this suit is that I’m able to take it off easily, and put it back on wet.  This meant I didn’t have to sit around in it all day at a Masters meet… unless I just wanted to look GOOD (i.e., slimmer).

Since then, the suit has been brought out of storage for multiple drills and video shoots, ESPECIALLY those in which I wanted to be in front of the camera.  I’ve even worn it for a few practices to see if my current training has been effective.  I love swimming practices in the suit because I have a better shot of keeping up with my younger swimmers.

One of my high school-aged swimmers has tried multiple full-body suits, and has found none that he likes.  He feels too constricted, like he can’t breathe, so no matter how much convincing I’ve tried to do, he simply wouldn’t swim in one.  A couple months ago, he sent me a text and asked if I had a set of "pants" he could try at practice.  I figured it was a good opportunity to get him to try my BlueSeventy.  Besides, I wanted to see if it had the same impact on him that it had on me.  I designed a set for him for morning practice in which he’d do part of the set in his drag suit… then get out, change into the "pants" he’d requested, and repeat the set.  When he got out after the second round, I surprised him and pulled out the BlueSeventy and told him to wear it for the 3rd time through.  It took only one 100 for him to finish with a smile on his face.  He wore it for the rest of practice, then at his meet that night.  This swimmer is 6’1", while I’m 5’10"… so he was STRETCHING my suit as well. 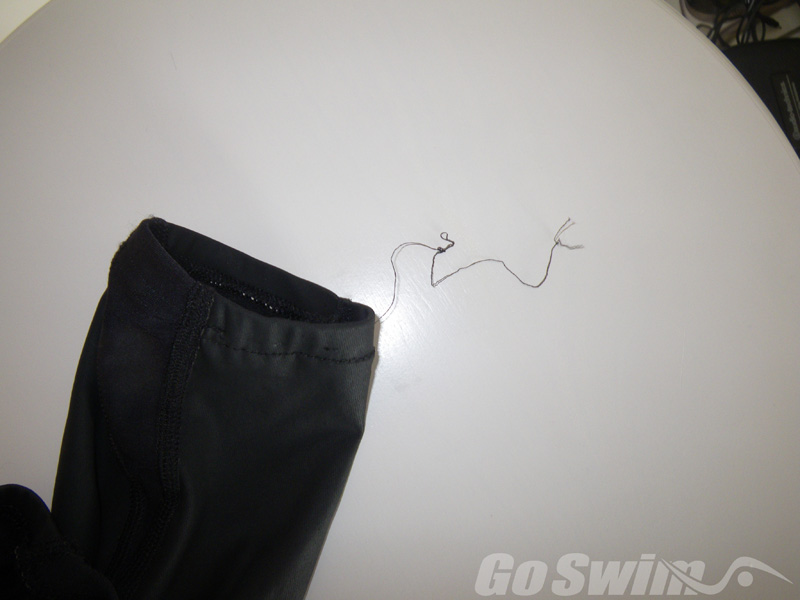 I wore it a few more times at college practice, and for more filming.  One of the college swimmers asked for help on his breaststroke, and through the course of working together, I decided to have him try my BlueSeventy.  He put on the suit and proceeded not only to swim faster in practice, but also to make the stroke changes we had worked on.

When it came time to order suits for the college team, everyone was wondering which to order.  While I didn’t have access to any other suit than the BlueSeventy, I at least wanted to allow as many of them to try it as possible.  While I avoid recommending suits to my swimmers, I do try to give them the opportunity to test something.  On one day at practice, approximately ten different swimmers put on, swam in, and took off my BlueSeventy.  These are BIG guys!  The suit was starting to show some wear… the ankles were becoming a bit looser, and were starting to fray.  Man… some of them have HUGE feet! 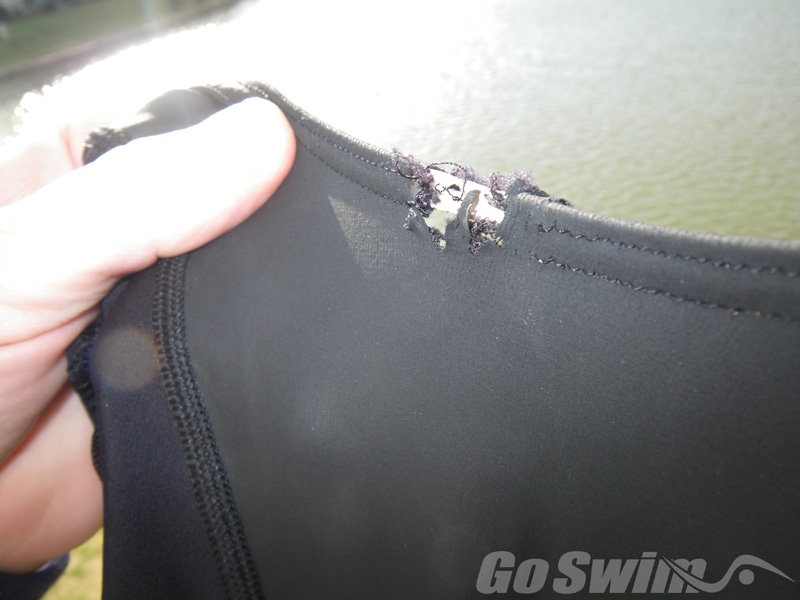 Test after test, swim after swim, there wasn’t ONE swimmer who returned after his first 50 without a smile on his face.  While the BlueSeventy was being tortured, it was still effective.  Through the stretching, twisting, and arranging of the material, finally, a tear started to appear in the neck.  Now the question was… do I allow them to TRASH my suit, or save it for myself?  That question was answered very quickly because the swimmers are ALWAYS more important than the coach.  Put it on another swimmer until it finally disintigrates.

I continued to wear the BlueSeventy occasionally for filming and practice.  I figured that, at this point, its usefullness for competition had passed. 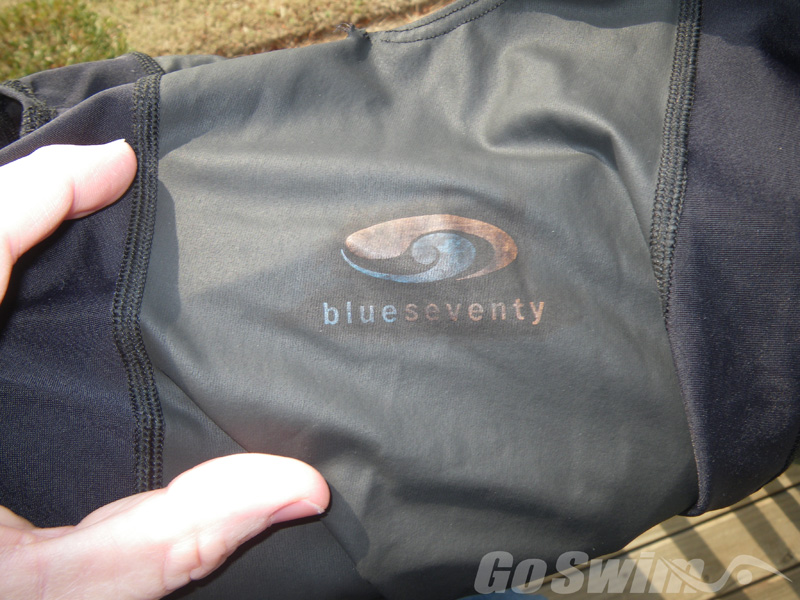 A few weeks ago, the college team traveled to a meet with its arch rival.  One of our swimmers was going for a very lofty goal, and decided he was going to try the BlueSeventy.  Since this was a special occasion, an order for a single suit was placed.  As sometimes occurs, a mistake in shipping from the company we ordered it from happened, and as the bus was leaving the station, we were without his suit.  Good thing I had Old Faithful in my bag.

Because of the rules in college swimming, we had to make sure the BlueSeventy logos were blacked out.  I was following the swimmer around before and after his warm-ups, swims, and warm-downs… with a black marker doing my best to cover the logo each time.  Permanent isn’t always permanent on these suits… but for the short time he was racing, the logo was blacked out.

JUST before the meet started, the new suit was delivered to the pool and my "marked up" suit was now a backup.  Since the suit was there, and since it was already advertising-legal, one of our other swimmers asked if he could try it.  Now, this particular swimmer is one of the bigger individuals on the team.  While making sure he could fit in the suit, which was now stretched beyond its original size, his warm-up went without a hitch.  In his individual event, he swam a fantastic time, placed 3rd, and achieved a very high personal goal.  It was great to see the smile on his face as it always is.

Since I never know when I’m going to need my BlueSeventy, it’s become a permanant fixture in my swim bag.  It holds no special place on the drying rack; it’s just another piece of equipment.  Because of that, when a Masters friend asked me last week about his interest in the BlueSeventy, and which size he should get, and if it was worth it, I pulled the suit out of my bag and said… give it a try.  This particular swimmer is 6’3".  He wore it for his entire practice, smiled when he handed it back to me, and as far as I know has placed his order.

The last time the suit has been out of my bag, may have been the last time it’s going to be fully functional.  In our most recent college meet, the same swimmer asked if I had the suit.  I pulled it out of my bag and he wore it for one of his races.  He walked around in the suit the rest of the meet, until he came up to me for his final event asking if I’d be so kind as to zip him up.  As I reached for the zipper, it finally happened.  After what’s been estimated at nearly 70 swims by individuals of many varied sizes, a tooth broke on the zipper, and we were stuck.  So we thought.  Through some tugging and pulling by teammates, we were able to line up the tooth, zip up the zipper, and get him to the blocks on time.  The zipper held through his 50 free, and the suit made it back into the bag. 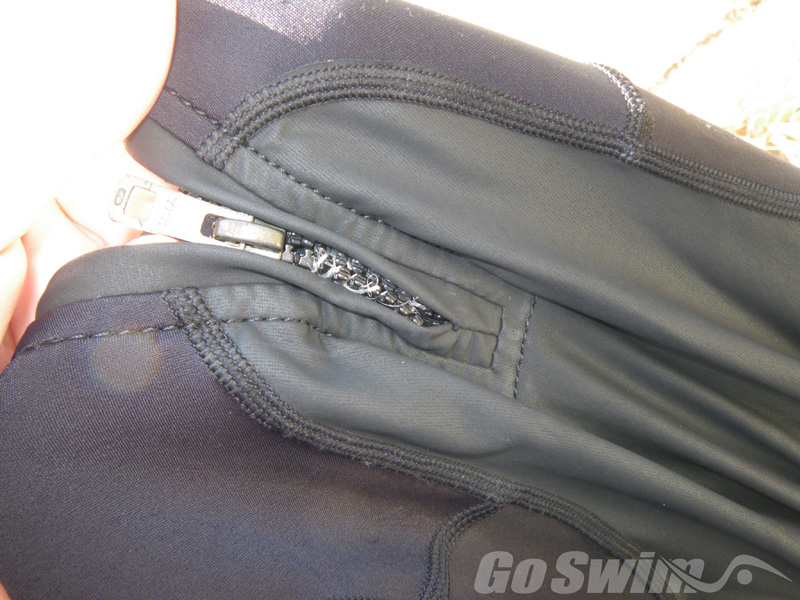 With some nylon thread, the zipper is somewhat functional again, and the suit LIVES ON!

In my opinion, for those saying that these suits will have a negative impact on the sport because they cost too much… I say it’s not the case.  While I would RARELY get this many swims out of any suit I’ve ever used at a championship level, I found this suit to be as, if not MORE, durable than any that I’ve ever had.  Its performance advantages aside, this thing is a great value.

I know there will be people who don’t like hearing positive things about these suits. I’m not one of them.  Their impact on our sport, positive or negative, will be measured in the long term.  As of today, they are legal and people are wearing them.

We can all put our feelings into the forum about the impact of these suits.  As for this article, it’s a thank-you letter to my BlueSeventy for hanging in there for so long.  I’ve definitely gotten my money’s worth out of it and… with the zipper fixed… it’s not dead yet.