COLORADO SPRINGS, Colo. – U.S. Paralympics, a division of the U.S. Olympic Committee (USOC), announced that Dave Denniston has been named Coaching Fellow for the Paralympic Swimming Resident Program at the Olympic Training Center in Colorado Springs. 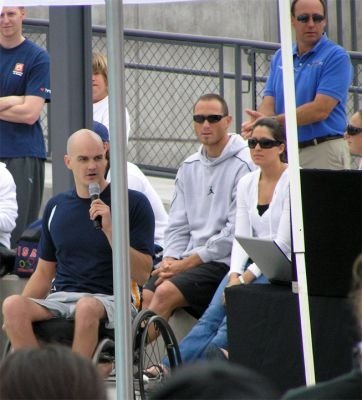 In this role, Denniston will direct the training and competition preparation for the Paralympic Swimming Resident athletes, oversee the day-to-day operations of the team, including working with adjacent performance staff and assisting with national team responsibilities.

“I’m thrilled to have this opportunity to work with some of best athletes in swimming,” said Denniston. “I’m really eager to share the knowledge and skills that I have acquired as an elite swimmer and Paralympian. Knowing that the swimmers and coaches I will get to work with share my enthusiasm will only strengthen the U.S. Paralympics swimming program. This position is truly another dream that has come true for me!”

Denniston, a 2008 U.S. Paralympian (swimming), graduated from Auburn University in 2002 with a degree in communications and a minor in English. In 1999 while at Auburn, he became an NCAA champion in the 200 meter breaststroke, the same year the Auburn Tigers won the NCAA Championships.

After graduating, Denniston moved to Irvine, Calif., where he swam under coach Dave Salo and qualified for the World Championships Team in 2003 in the 200m breaststroke.

In 2005, Denniston was injured in a sledding accident that resulted in paralysis from the T-10 vertebrae down. He returned to swimming as a form of rehabilitation and went on to make the 2008 U.S. Paralympic Swimming Team, competing in the 2008 Paralympic Games in Beijing, China.

“We are thrilled to have Dave join our team in this position,” said Julie O’Neill, Team Leader, Sport Performance, “His experience as an elite-level athlete, both able-bodied and as a Paralympian, will enhance his skills as a coach. Dave will be an outstanding leader and mentor in this role and will contribute to the overall success of the U.S. Paralympics Swimming program on the international field of play.”