I had the opportunity to spend the past week in Columbus Ohio at the Senior National Championship meet for USA Swimming.  While there, I got to watch Ryan Lochte, both in and out of the water.

Here are a few things I learned by observing one of the greatest swimmers in history. 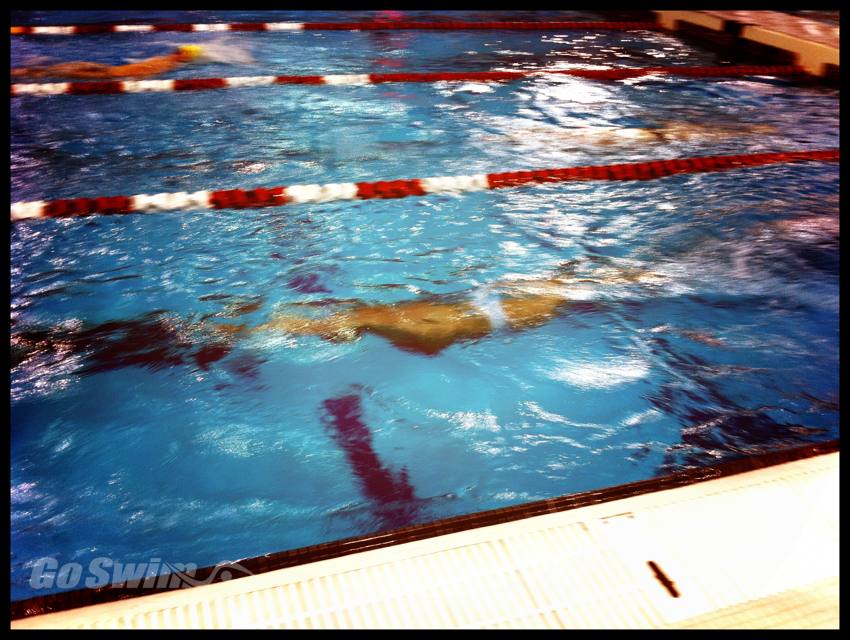 Hips –
One of the reasons I put a “hips” drill up today was simple.  While standing at the side of the pool and having Ryan swim just a couple lanes away, I have never seen hips as high as his during freestyle.  From the comments of the coaches around me… very few others had as well.  We came to the conclusion that if Ryan didn’t have to dive in or do turns… we’re pretty sure the back of his suit could remain dry for a very long time.  One question that came up was, “Is that genetics or something learned?”  Personally, I think it would have to be a combination of the two.  Genetics alone never make a great athlete… these traits have to be learned and practiced to be mastered.  Simply put… it was amazing to watch.

Dealing with Mistakes –
Yeah… even Ryan has things happen to him that are unexpected.  During the start of the 100 back, Ryan slipped off the touch pads and was pretty much dead in the water.  In races with the caliber of swimmers he was competing against.. that’s pretty much it, you’re done and I’m sure he knew it.  But Ryan made his way to the surface and did his best to crank out a pretty darn respectable time.  While it would have been easy for him to cruise, I was impressed that he at least tried, even while knowing he had no chance of winning.  Nicely done.  You can watch all the races by following this link, but look for the men’s 100 back final to see Ryan starting behind everyone else.

Racing Tired –
It was pretty clear that Ryan’s been training, was unshaved and had come to the meet to stay racing sharp.  It could have been very easy to skip this meet and get ready for World Champs, or just stay in the shadows… Ryan came to play and race.  Again, it showed so many young swimmers that there will be a day you’re expected to swim fast and compete even if you’re not totally ready.

Warming Up –
If you ever have a chance to go to a high-level elite meet, make sure you get to the pool early enough to watch the stars warm up.  Watching guys like Ryan get ready to race is a lesson in itself.  Working on his pacing with his coach, his breakouts, doing spin drill before a sprint, but especially standing right next to his lane while he leaves the wall and works on his trademark underwater dolphin.  Standing 5 feet away is dramatically different from watching on TV… it’s simply amazing and something every swimmer should be working on daily.

Style –
Yeah… or should I say Jeah!  Ryan walks in with extremely cool headphones, walks up to the blocks with his green Speedo shoes, swims prelims in his white suit, and finals in a variety of suits in an era where all the suits look exactly the same.  It’s refreshing to see some color again.  I know he’ll be wearing the tech suit during the BIG meets… but at least here, he kept it upbeat.

Humility and Graciousness –
Seriously… this guy is one of the most recognizable swimmers on the planet, yet I’ve personally watched him sit at a table and sign autographs for hours on end without blinking an eye.  We were lucky enough to be sitting with the Florida team for most of the meet, and there were countless times when young swimmers would come up and ask for a picture with Ryan.  No matter what he was doing, or what he was getting ready for, he never turned anyone away.  At one point, he was obviously relaxing, listening to music, no emotion on his face at all, and a couple swimmers came up with camera in tow.  When they asked for a picture, Ryan leaned forward, took off the head phones and a big smile came across his face as the swimmers leaned in for the picture.  It wasn’t forced, it was genuine.  He’s just good to the kids who look up to him and I think that’s great.

Professionalism –
I’ll finish this with one last point.  Ryan seems like a laid-back guy who just kinda jumps in the pool and swims really, really fast.  At one point in the meet, I was standing a couple of people away from Ryan’s coach while he was swimming.  I don’t know what it was they were working on, but they were obviously making some changes from a previous swim and I overheard Gregg Troy exclaim… “Man can that kid make changes quickly.”  Coachability is something every coach looks for in his or her athletes.  Do they listen and, more important, can they make the technical or strategic changes that will make them more successful.  While Ryan may seem laid back, there’s a lot going on in there, and it’s all geared toward performance.

Again, I really appreciated the opportunity of just hanging out at the meet near this great swimmer, great team, and great coach.  I’m glad he’s in the sport, and glad he treats the younger swimmers so well.  He’ll ultimately be fighting one of our other favorite swimmers in a couple years, Aaron Peirsol (who we’re also MASSIVE fans of), but that’s what the sport’s all about.  I’m just glad both of these guys are good people.