← Main Set Wednesday – Learn to Flip and SCM in SCY

Going along with this week’s drill, we started to demand that people thought like swimmers when leaving the walls… yes, even masters swimmers.

We called today’s practice "reprocussion Wednesday", which meant, some teaching to make sure everyone understood what was expected, and then some swimming holding the swimmers to performing what they learned through the instruction… and then the payment!

Main Set (short course yards)
– Review the video that was sent out to the group prior to practice… which happened to be Turns – Practice Pushoffs
– 16 x 25 on :30 making sure everyone undersood the idea of the pushoffs
Next came the reprocussion warning – for each team member that didn’t do the pushoff correct, I was going to put a check mark on my phone, and we’d all (as a group) have a 25 butterfly at the end of practice.  Yes, I’m at least using the THREAT of butterfly as punishment, so those of you who don’t agree, don’t be a hater… we had a great time.
– 10 x 75 on 1:15 – your choice of stroke, but I’m watching the pushoffs.
– 10 x 50 on :50 – choice of stroke… but I’m still watching the pushoffs.
– 10 x 25 on :30 – choice of stroke… still watching.

Finishing with a few "guess 25’s".  This is where all lanes leave on my GO, but don’t know what stroke they’re doing until I tell them.  Everyone has to be ready at the wall, one hand on, the other behind, feet high, ready to go.  I yell GO "stroke" (in which I change which stroke for each heat).  This shows that basically everytime you push off the wall, no matter what stroke you’re doing, it’s the same pushoff.

Gotta be quick, and the group did catch on to my pattern on the last 3 x 25s, as I sounded like a broken record… GO FLY! 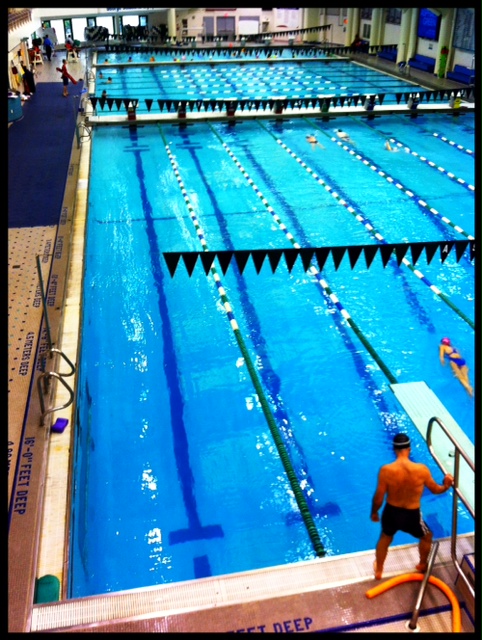 By popular request, we’ve put together a glossary of commonly used swimming terms. While this is by no means a complete list of swimming-related terminology, it’s a good place to start if you’re trying to understand some of the language used in our drills, practices, and articles.

Here’s a fun set that challenges and builds team spirit.

This one’s for Reemi, who asked us to create a butterfly set for her birthday swim.

← Main Set Wednesday – Learn to Flip and SCM in SCY