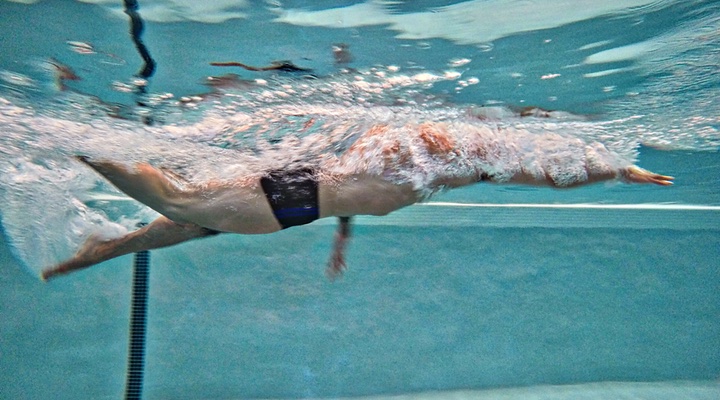 Way too often there’s an argument about who is going to lead, rather than a fight over who’s going to be the leader.  In developing a culture of champions, or people who are striving to elevate themselves as athletes, developing lane leaders is much more than about who’s going to go first.

There are many responsbilities when you take charge and go first, and you have to have a few key qualities to manage these responsibilities.  Here’s a short list, certainly not all inclusive:
1.  ATTENTION
The lane leader must be able to hear the set as described by the coach.  He/she must listen to the details of the set and the intervals.  If nearby swimmers are talking, it’s the lane leader’s responsibility to get the others to be quiet so they’re able to hear these details.  Since many of the other swimmers will be relegated to “followers” in the lane, the first person MUST get these details correct.

2.  MEMORY
The lane leader must REMEMBER all details of the set.  Is it descend?  Do the strokes switch?  Is the interval the same the whole way through, or does it change?  When is the drill?  What is the drill?  How far apart should we go if the lane is crowded?  This list gets longer with a more complex set, but unless the lane leader understands the MEANING and purpose of the set, the entire lane may as well swim for 30 minutes straight.  Basically that’s what ends up happening anyway.

3.   ABILITY TO READ THE CLOCK
The lane leader MUST have an understanding of the 60-based math required to be an athlete.  Years ago, we had clocks with round faces, and hands sweeping around.  In my opinion those analog pace clocks made it MUCH easier to keep track of when you were supposed to go.  Today, in the digital age, you have to understand NUMBERS.  If you’ve read some of my other articles, I believe in testing swimmers with math, especially as fatigue sets in.  By assigning 50s on the :37 rather than on the :40, you require athletes to think, and to become engaged in the process.  The lane leader must take pride in the responsibility of leaving on time… all the time.

4.  COMMITTMENT TO THE PRACTICE
This simply means… not getting out.  If you’re in practice, you stay in practice until it’s over.  No getting out to go to the bathroom.  No stopping in the middle of the set to fix your goggles.  Whatever happens, the lane leader must set the example that nothing will stand in the way of completing the task at hand.  Committment also means that the lane leader must embrace the set or sets that the coach has given, even if a particular set isn’t their favorite thing to do.

5.  PRIDE
Being a leader means taking pride in being a leader.  You don’t have to be loud, or yell.  This type of leader is simply organized and committed to being better.  They lead by example and by all of the traits listed above.  They’ll bring their lanemates UP to a new level, rather than push that job off to the coaches.  They’ll take pride in their team, in their swimming, and in the FACT that when they’re in the pool, they are indeed focusing on THEIR career.

Swimmers, and all athletes, must remember that the time they spend in the pool is ALL ABOUT THEM.  When a coach asks or demands that you do something better, it’s to make THE SWIMMER better.  When lanes are disorganized, when people don’t know when to go, when people don’t know what to do… the time spent at the pool is simply unproductive.  Nobody wins.

Also remember:  If the most important job for a coach is to yell “READY HUP” for each group of swimmers, they can’t do their real job.  Swimmers / athletes need to take responsibility for what they do in practice, and since not all swimmers will… a lane leader MUST emerge to accept that responsibility.

While I’d love to be able to offer a check list of ideas on how to develop leaders, it’s never that easy.  In the immortal words of Forest Gump, “life is like a box of chocolates,” which is just like a group of swimmers.  You never know what you’re going to get, or what it’s going to take to inspire athlete “A” vs. athlete “B.”   Each answer will be different, and each hot button to inspire that athlete will also be different.

For coaches, just imagine how productive a season you would have if you could develop lane leaders at the beginning of the season.  Imagine having to explain a set only once… and then telling the group when to leave.  Your job at that point would be to… well… COACH!  Sitting back with watchful eyes seeing who needs technical help, or inspiration.

Finally, from my “back in the old days” perspective on this.  I was SO lucky to be surrounded by people who cared so much about being the best.   My practices were filled with lane leaders.  Our coach would give the set, and then watch as 40-50 swimmers, in unison, progressed through it.  These were brutal sets.  But… as with every school of fish, there would always be one injured fish that stood out like a sore thumb.  Like a SHARK, the coach’s eyes would immediately be drawn to the break in the rhythm and know something was wrong.  That’s when the real “coaching” began.