So what if you haven’t been swimming for, say, 30 years.  Swimming today compared to back then, would be like opening a time capsule.

I recently had a visit from my brother, the person who taught me how to swim, and who was a US National Team Member.  Kevin really hasn’t been in the water since college, but has preferred running and biking.  Well… when he visits… he has to SWIM!

He started with the FINIS Agility Paddles.  There really isn’t a cooler paddle on the market.  NO straps at all.  No problem at all, and he was very intrigued.

Next, Keven tried strapless-paddle sculling with some Star Paddles with the straps ripped off.   Breaststrokers take to this very quickly, and after some instruction in the details, he was doing great and felt the stress where he should.

On to some PDF Fins.  Strange looking for someone who hasn’t been around the pool for a while but, again, just enough push in flutter and an amazing treat for a breaststroker.

The old kickboards have been upgraded with the Alignment Board.  I was very pleased when after a very quick mention of NOT allowing the board to move during the kick, how quickly he was able to maintain that great line.  No wonder he was so good.

Finally… the biggest change in the sport over 30 years has been the underwater dolphin kick.  No better way to show someone what that’s supposed to feel like than a Mono Fin.  Of course, THIS was the toy Kevin enjoyed the most.  There’s nothing better than feeling how the entire body works together and how to fine tune balance on all sides.

Obviously there are many more tools and techniques to work on, but for those "former" swimmers who haven’t been back in the water for a while.  There are so many interesting tools, techniques and training techniques that can completely rejuvinate the sport for you.  Come on… jump back in. 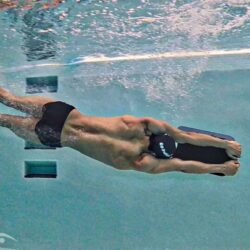