Training takes its toll on technique.  While THAT sounds like a headline from the National Enquirer, it’s a typical occurrence during most age-group swim practices.

Very often in practice, technique is sacrificed for survival and the human instinct of trying to continue to get air overcomes the athletic need to go forward quickly.  There are a few "go to" technique aspects of each stroke that you can focus on when your arms and legs have given out.  Just remember:  Completing a proper stroke is always more effective than taking a few extra sloppy strokes.

Butterfly – The Climb!
At the end of the first 100 of a 400 IM in practice, it’s typical to see many swimmers trying to climb above the surface of the water… bobbing up and down with only the head, and occasionally the hands, appearing above the surface of the water.  The body is in a near-vertical position and forward momentum has all but disappeared.  If you’ve never seen this, count yourself lucky!

What do you focus on when everything is falling apart?
Pop the hips.  While it’s against instinct, the best way to air is to press the chest deeper into the water.  With the hands high on the surface, the chest, while still filled with air, will want to pop you back up to the surface.  The combination of pressing the chest a bit deeper will cause the hips to come up, just breaking the surface, and then the natural action of the hips dropping (and the chest rising) allows you to continue to move forward… AND BREATHE more easily.

Check out Misty Hyman in this chapter and picture for the idea. 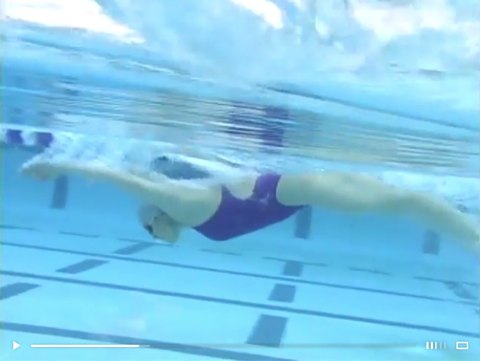 Backstroke – Floating Hands
Nothing says "I’ve had it!" more than a slow, tedious turnover in backstroke.  The arms barely make it over the top of the stroke and slowly fall back into the water.  Rotation is gone, there’s a hesitation at the finish of the arm pull as the swimmer searches for another place to rest.  Coaches watch in awe at the ability for an entire group of swimmers create narry a splash as the hands ever-so-softly fall back to the water like leaves floating to a still pond at the beginning of fall.  Only the tiny ripple that occurs shows that some type of impact has happened.

What do you focus on when everything is falling apart?
Get the hand OUT of the water!  By not allowing the hand to sit at the side, you’ll immediately demand that the arm start the recovery process, which helps the pulling hand in starting its catch.  This also gives the hand more speed as it travels over the top, and cuts in to the water for the entry.  While you don’t want to over splash on the entry, you also don’t want it SO SLOW that it doesn’t carry any momentum into the water.  Fast hand exit will also help the body to rotate quicker.

Check out Aaron Peirsol’s recovery and hand entry in this chapter and pic. 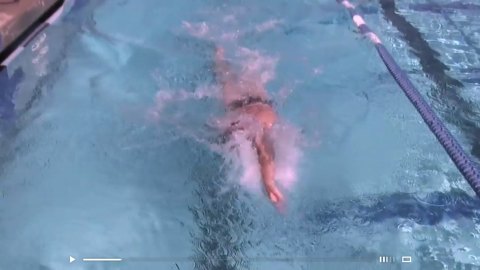 Breaststroke – The Yawn
Tired breaststrokers often resemble tired butterfliers.   The body is in a climbing position, but since the arms can be held below the surface, sometimes the only thing a coach sees is that head… coming up with that sorrowful look through the goggles, and that wide-open mouth that resembles either a yawn, or a reproduction copy of Edvard Munch’s The Scream.  It doesn’t happen fast, and swimmers spend more of their time just trying to get back to this paused position than they do moving forward.

What do you focus on when everything is falling apart?
GET UNDER!  The MOST important position in breaststroke is to be extended out front and through the feet.  The entire body is stretched out just under the surface of the water.  When swimmers get tired, they focus more on getting back to air (which slows them down) rather than getting into a position that keeps them moving with very little effort.  If you’re running out of air, try streamlining under water, where you can focus on a slow exhale to get yourself ready to replace all the bad air with the good.  It’s counter-intuitive, but slower breathing with a longer exhale can make it much easier to hold things together than taking many strokes and hyperventilating.

Check out Brendan Hansen and his Streamline Timing chapter and pic. 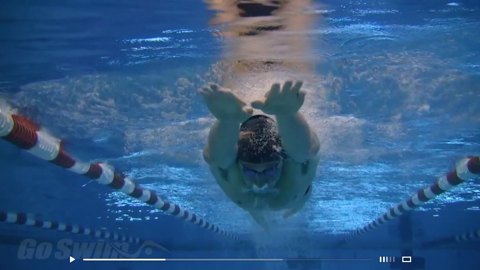 Freestyle – The Collapse
Here we are… made it to the last 100 of that 400 IM and things have just gone to slop.  Arms flailing everywhere, no extension out front, even those who are still trying are just throwing their arms forward in the hope they grab some water.  Breathing is sporadic or every stroke (who can tell), and all of a sudden the pool seems like it’s been invaded by a visiting team from Lilliput.

What do you focus on when everything is falling apart?
GET TALL!  Nothing says I’m trying more than a swimmer who is reaching FULL extension on every stroke.  When you’re tired, and you always have an arm producing some propulsion, then you should be thinking about remaining in the position that will allow you to slip through the water the cleanest.  Extension out front will help you cut through the water better, and set up even the most tired arm, for the best possible pull, no matter what’s left in the tank.  Think of slipping when the power is gone.

Check out Roland Schoeman in his Extend Front to Back chapter and pic. 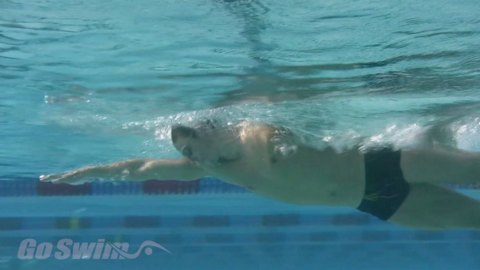