Swimmers need to understand something:  When you’re standing above the surface, you see SO much more than people think.

Being a coach gives you a great perspective on what’s going on below.  As a swimmer, I was always amazed at how my coach was able to see someone breaking the flow of the group.  It could have been someone stopping because of a sore shoulder, or two swimmers whacking their arms in passing, or someone fighting a calf cramp.   Any number of things can break the flow, and it’s easy to spot this from on deck. 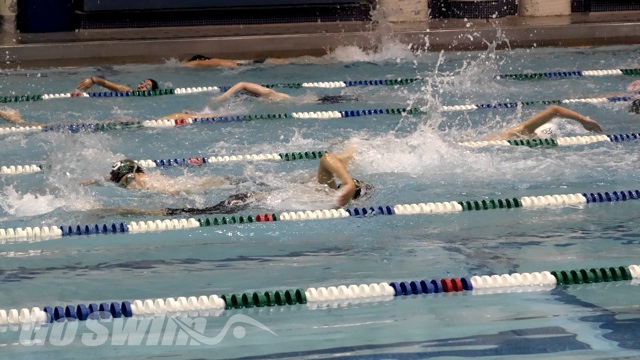 Aside from the more "legitimate" reasons for a break in the flow, there are "other" reasons.  Coaches see these, too, even though the swimmer may think otherwise, and believe they’re getting away with something.   A pull on the laneline here, a one-handed turn there, throwing in a couple of armstrokes during a kick set, pushing off the bottom every once in a while, trying to disguise the fact that you’re just not making the interval.   For what means?  Who are you really fooling?   Spend a couple of hours on deck or in the stands and you’ll begin to understand.  Coaches (and parents, for that matter) see everything.

Sometimes it’s a game that we coaches play.  We tend to watch the people out of the corner of our eye who have a known tendency toward cutting corners.  In our own mind, we need to come to grips that at the end of the season, we really have done all we can to try to help all swimmers succeed, but there is really only so much we can do when the swimmer isn’t taking an equal part in the responsibility of their own season.

What are the measures we can take when we see someone cheating, cutting corners, attempting to hide that they’re just not making it, or not applying the techniques, stroke changes, and adaptations that we’re suggesting for them to make to improve as a swimmer?  Here’s a quick list of solutions from soft to harsh.  Rest assured, however, that they can all be used to maintain a level of actual committment to the sport.

1.  Talk to the swimmer and make sure they realize that we see these actions taking place.  Give them the benefit of the doubt.  Maybe the swimmer didn’t realize she was instinctively doing something wrong.  Or maybe he didn’t know that what he was doing was breaking one of the "written" rules of swimming or one of the "unwritten" rules of swim practice or swim etiquette.    It’s our job to educate the swimmer, or at least make sure the swimmer understands what they were doing was wrong, and then tell them the proper actions, or what we expect from them in the future.

2.   Yell at the swimmer.  Yeah… add a bit more harshness to the message.  Not all, but some athletes need that level of interaction to get a point across.  While not the preferred method, it’s part of the game.  Some coaches yell, some don’t, but it doesn’t have to be a negative situation.  Yelling can be a way of making a point stick, and the skill of yelling constructively is an acquired act.

3.  Punish the swimmer.  There are many types of punishment, but swimmers should know that their actions have consequences.   It’s not that their actions will physically harm the swimmer or another swimmer.  It’s that their actions will hinder them from having the tools necessary to reach their potential.  They’ll not have the training and discipline necessary to swim as fast as they can at the end of the season.  Maybe they won’t be tough enough to look their competitor in the next lane in the eyes on the last lap, and win through an effort level they learned in practice.  Punishments can be everything from repeating the set, to push-ups between the set, to removal from practice.  The last having to come with a message that what they were doing during practice was simply purposeless, and there was no sense in them continuing.

4.  Removal from that training group.  Not all swimmers belong in their training group just because they’re old enough, or even because they’re fast enough.  Training groups are set up so the athletes in that group share a common goal for end-of-season performance.  Training groups are set up so that all the athletes in that group have similar long-term goals…be it swimming in the local championships, the state championships, all the way up to the Olympic Games.  If you’re the one athlete that isn’t following the pattern that was set forth for that group, then maybe the group below would be more in line with the effort, focus, or attendance habits of that athlete.  A training group isn’t a right bestowed by age or speed.   It’s an honor.

5.  Removal from that team.  Sometimes, and thankfully rarely, swimmers are asked to leave the team because their goals, actions, or practice habits detract from those of the other swimmers on the team.  This is the sacrifice of one to better ensure the success of the many.  We as coaches absolutely dislike this final method.  We choose to coach because we love to see children succeed.  We thrive on helping them accomplish things that are hard to accomplish.  We feel pride when we watch them take the skills learned in their swimming career and transfer them to a life career…seeing them make a positive impact on society.  Removing someone from the team is a final solution, one that comes only after exhausting all other solutions.  But at some point, the coach needs to weigh the amount of time, effort, attention, and emotional energy it takes to reform someone who’s cutting corners…against the amount of time lost from helping the swimmers who are doing EVERYTHING that’s asked.  Finding this balance is the hardest part of coaching.   It takes a mature coach to understand when it’s time to stop trying.

Swimmers need to ask themselves:  What is my reputation on the team?  When a coach asks for something, can the coach expect that I’ll do it, or will the coach have to watch, intently, to see if I’m cutting corners.  Have I turned my coach into a babysitter or even a police officer?  Do I take away from the other members of the team, or do I inspire those around me to be better?

How do you want to be known as a swimmer?    Trust me, we as coaches standing on deck KNOW who will do what we ask, and who will cheat or not do what we ask on the next set.

Which kind of swimmer do you want to be?