This adventure began six years ago, when Glenn Mills introduced me to a different way of training. At that time I also met Art Aungst, who coached his girls’ high school swim team to the New York State High School Championship two years in a row, off a daily training base of just 3000-4000 yards. The concept of technique-based training made sense to me, an adult triathlete with limited time to train. My background is in teaching, and I had coached children in the past, but it wasn’t until my encounter with Glenn and Art that I thought about spending my life working with young athletes.

After returning to Mexico in 2000, my plans about coaching and training took shape. My goal was to create a triathlon training program based on technique. Meeting Glenn remained a key point in the creation of the project. He gave me a good knowledge base in swimming and mental preparation. The other two areas — biking and running — needed the same attention, and I received valuable input from becoming certified as a USA Triathlon Level 1 and Level 2 coach. In the process, I met Dr. Nicholas Romanov, and he became involved in the biking and running aspects of my project. He also introduced me to the concept of recovery-based training. 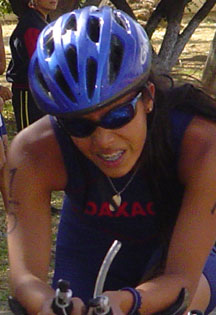 The last part of this creation was the most important: the athletes. Fortunately, I had coached children in the past, and when I returned to Mexico, some of the younger brothers and sisters of former athletes wanted to initiate training. My group consisted of children ranging in age from 7 to 10 years. To make a long story short, the children in my program are currently some of the best in their age groups (9-11, 12-13, 14-15), in Mexico. Research in the literature did not show evidence of a similar program. The project designed in 2000 will continue for the next eight years (two Olympic cycles). One of the most outstanding athletes in the program is Ruth Gris Cid, and she has been greatly influenced by Go Swim’s philosophy. In March, Ruth competed in a Regional Qualifying Race and won a coveted spot for the Mexican National Triathlon Championship, which will be held at the end of April. At Regionals, Ruth finished 2:36 minutes ahead of her nearest competitor.

What follows is a summary of my three years of work with this group of young athletes. Since the program relies heavily on Go Swim principles, I thought it might be of interest to those of you who read the Go Swim website for training ideas and inspiration.

Three-Year Follow-Up of a Triathlon Program for Children, Based on Technique and Recovery

Abstract: Five children ranging in age from seven to ten years were selected to be part of a triathlon team. They had all been looking for a team to train with, and were chosen based on their commitment to this particular program. Four other children joined the training team at different times during the last two years. All are healthy children and are under the care of their own pediatricians. Except for one athlete, they all live in a small city in Mexico. They come from above-average, middle-class homes, and each athlete lives with two parents. They are public-school students (except for one who attends private school and who joined the team a year ago at the age of fourteen).

A program was designed to help the children learn the fundamentals of all three triathlon disciplines. The children learned through personal coaching, and the coaching/teaching was technique oriented. They also were assigned selected readings, given as "challenging homework," and their grasp of knowledge was monitored using questionnaires and during the coaching sessions.

We approached each discipline in the same way that Go Swim approaches the teaching of swimming, i.e., increase your power and efficiency by changing your body position for minimum resistance and maximum power. Also…pay attention to cadence and flow. Our teaching protocol for swimming involved streamlining, decreasing drag by balancing well and decreasing the diameter of the body’s surface in contact with the water frontally ("tubing"). Our teaching protocol for biking was standard — emphasizing pulling instead of pushing, positioning in order to use the weight of the subject to pedal, and monitoring the cadence as an indirect measure of quality of work on technique. Our teaching protocol for running was based on the Pose method of running — use gravity without implementing unnecessary movements, run with the center of gravity in front of the subject, and keep the legs behind the center of gravity.

For ethical reasons, we did not form a control group, but the subjects were compared to local children practicing a single sport in competitions and to national triathletes.

Perceived exertion and pulse rate were used as parameters of recovery. Every activity and repetition was followed by full recovery on the exertion scale and recovery to lower than 120 beats per minute heart rate. If more than two minutes were spent recovering, the activity was halted for the day. Under this program, our athletes spent less than half as much time practicing the specific disciplines as local children who trained in a single sport swimming, bicycling, running). Yet our athletes achieved a higher competitive level in running and cycling (above the 99th percentile for three of them) than the local children involved in only a single sport. In swimming, our athletes were a bit behind (80th percentile), time wise, more likely due to the time it takes to acquire the technique, and the time (six hours a week) spent for our triathletes practicing swimming. In triathlon, our athletes are at a competitive level (90, 90, and 99th percentiles in their age group for three of them, nationally).

There are interesting aspects of swimming while training for triathlon in these children. Each of them swims less than 2000 meters a day, for five days a week. Once a week they train for 90 minutes with a swim team at the pool where they practice, to keep in contact with the swimming competition. The thirteen-year-old girl is able to swim 1,500 meters in 24 minutes without specifically practicing for that event, and never going more than 400 meters straight during a practice, once a month. She was able to swim the 1,500 distance just five seconds above her 200-meter pace, and to run a decent 2,500 meters in less than 12 minutes after the swimming (biathlon meet in our pool, February 2004). Technique and recovery-based training have different curves relating speed-resistance-distance, and there is still a lot to learn and observe about it.

I promised myself not to bore you with data and information, but to give just the rhythm of an adventure, a "hola" thanks to… GO SWIM.