Last week, I wrote about kids choosing their lofty goals, and how hard the task is going to be to accomplish those goals. Since then, I’ve had a great opportunity to spend a little time each day coaching again. It just so happens I’ve had the opportunity to coach two young swimmers this week.

The usual routine of swim practice deals with making sure the swimmers are awake in the morning, convincing them that the things they’re about to accomplish are going to be good for them, then making them follow a certain path towards completing the practice with proper form, and effort.

Rather than going through the entire day by day schedule of what these two young men have been doing, I’ll quickly get to the point of this article. How do you motivate swimmers to train with focus and intensity?

We’ve been even more fortunate this week to have the United States Swimming National Championships in town. The other night, we all decided to take in the show, and within two hours of watching every style of FAST swimming imaginable, I was sitting with two of the most MOTIVATED young swimmers I’ve seen. I had no problem the next morning asking both of them to do things they’d never done before, and to do it with more focus than they’ve ever given before. This morning, only after a few days of training, noticable improvements in the fine points of their swimmer were coming out. The way they watched the clock, gave feedback about what they were doing, and even completely focused on the things we discussed during a kick set (there really is NO time to rest in a good practice).

They had the opportunity to witness the swimmer who is currently the BEST swimmer on the planet, Michael Phelps. They got to see his perfection in so many aspects of swimming, that when I got back to the pool with them, to get their attention, I’d simply have to say, “Remember when Michael did…..”. At that point, I could pretty much fill in ANYTHING, because I had their attention.

During the meet, while the announcer began to introduce the finalists, the first two lanes were introduced as Olympic Gold Medalists. We watched so many US Olympians, World Championships Team Members, and past, new, and future National Champions. A final heat didn’t go by without somebody getting a HUGE grin on their face because we were about to see somebody famous.

If you want to motivate your swimmer, whether it’s a daughter, son, or student, take them to a great swim meet. If you happen to live near Baltimore, take them to ANY meet Michael Phelps is swimming in, but if you’re somewhere else, watch for meets coming to your area, or even close by. Look for meets that will have people swimming very fast, and let your swimmer watch, and study. Point out the fine points, the streamline, the fast turns, the quick starts. Make sure you also point out all the different styles of strokes. Make sure they know that you’re going to be helping them find their style. There are some basics everyone shares, but also so many things individuals do that are so unique, it defies the regular laws of physics (or so it seems).

Seeing their dream is the best way to help them realize that things ARE possible. In talking, one of the swimmers said Michael Phelp’s 1:56 200 IM would be impossible for him, I said, Michael Phelps is showing us what IS possible. Sometimes these things are hard to imagine… so just SHOW THEM! You’ll have more motivated, and HAPPIER swimmers… don’t think so? Check out the picture of these two guys at the END of practice!!!

Of course, it never hurts to have Dave Denniston staying with these kids. They get to even see how a great swimmer relaxes. 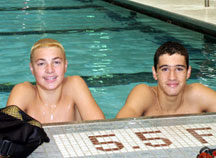 These guys just swam a BUNCH, and are STILL happy. 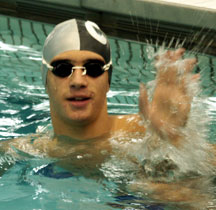 Smiling at the BEGINNING of a set? He must have a goal.