I got off on a little rant the other day about what coaches should NOT put into workouts because it makes them boring and pointless. Then King Glenn, oh Great Mentor and Boss, chimes in with a bunch of stuff about "at least you get in a workout" and "coaches have a huge responsibility…" I’m not really sure, I didn’t read it all, it bored me.

Today our friend Allan from Australia asked me some very good questions that I’ve been pondering for quite some time, and I thought I would put a little more thought into his reply than I would, say, a response to one of Glenn’s comments. (Good on ya, mate!). Then I realized this could quite possibly become an article. Yes, I could create an article on how to make practices physically AND MENTALLY stimulating through the eyes, ears, muscles, and brain of the Great Dave Denniston. (Or something along those lines. We don’t have to mention my muscles, I guess.) 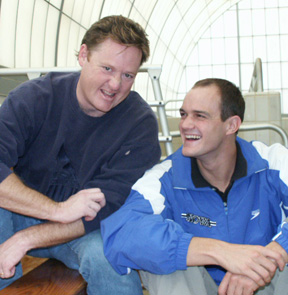 Coaches, LISTEN UP! Take two:
Allan suggested that I talk to the fill-in coach about my feelings toward the workouts. I agree with this idea wholeheartedly. But first I’ll have to clarify some things. Swimming with Doctor Salo for the past year has been like eating steak, lobster, shrimp, and beef Wellington every day for a year. I have been spoiled. The fill in coach served me a Weight Watchers’ frozen dinner, and I snootedly stuck my nose up at it and pushed it away. I’m sure it was just fine. Heck, I grew up on frozen dinners. I’m just not willing to go back to them. If I knew I would have to swim with, oh let’s call him "Coach Periwinkle" for more than a day, we would sit down and have a discussion.

My definition of an interesting set or workout encompasses many ideas, shapes, forms, smells, and disciplines. The first of which addresses repetition.

Repeats
It is my belief and experience that repeats in swimming are absolutely necessary in the majority of cases. But, there should be a limit to repetitions. Repeating a distance or a discipline 2 to 5 five times is great. This is a great range because you can figure it out after the first time, then on the remainder be aggressive and still do it right without losing interest.

Six to 8 repetitions is acceptable. Sometimes it takes a little longer to get the exercise down right, and six to eight repititions just begins to get tedious, but is never overbearing. Plus it provides the opportunity to do something great if the first few reps may not have been so good.

Anything over 8 repetitons and I’m throwing waterbottles, giving dirty looks, cussing at the thirteen-year-old girl who won’t get off my heels, and contemplating retirement so I can have a quiet career in the postal service. Seriously, when you get in the 9, 10, or higher repeat range, swimming just isn’t fun. It becomes tedious, and it is my belief that if you lose a swimmer mentally, you haven’t gained anything physically.

Layering
One of the things we do a lot of here at Irvine is what I call layering. Think about it… the Big Mac would be just a double cheeseburger if it didn’t have that extra bun thing and "special sauce." (Man, I’m hungry today.) So why not layer workouts like you would a Big Mac?
Instead of doing 6 X 100 followed by 18 X 50 kick, followed by 12 X 25 no breath, put them all together, like this:

I would much rather do that than go through the repetitive, black-and-white version that is written out first. Even ladders aren’t too bad if they’re layered with something else.

What Kinds of Things Make a Good Special-Sauce-and-a-Bun Thingy?
Sculling is always popular, and in my opinion never gets utilized enough in workouts. There are about 20 different ways to scull (maybe that will be my next article, as long as Glenn and Barbara let me use pirates as demonstrators).

Drills.  But let me clarify. If you put the word "drill" on any workout you have written, you are being entirely too vague and boring. That’s what we’re trying to avoid here, remember? Be specific in the drills you want your swimmers to use; otherwise, you’re going to see a lot of sloppy, careless, catch-up freestyle.

Kicking with and without a board.

Hypoxic work either swimming or below the surface.

Starts. Getting out and learning to enter the water correctly can be practiced every day, and you don’t have to give up yardage to do it. Just hop out of the water and dive back in… it’s easy, but rarely done.

Be creative, come up with something new or different that isn’t necessarily swimming oriented, but athletic.

Equipment
Use it. All of it. Make equipment up, use equipment where you shouldn’t. Equipment rarely gets boring. Some creative uses of equipment that I like:

Standing on a kickboard and sculling forward or backward.

Using paddles without the fingerstraps.

Kicking on a physioball!

Swimming backstroke with your waterbottle on your forehead.

Timed Swims
Burn them all! There is nothing more boring and pointless in my opinion than excessive timed distances or swimming. If you insist on doing this garbage, mix it up a little. Instead of an 800 straight, make every sixth 25 fly. Or make the focus of it kicking out past fifteen meters and holding 25 strokes. Instead of a 2000 IM, how about 20 X100 IM back to back? The only time I ever thought I was getting some benefit out of a timed long distance was this:

This was very hard, but it never got boring. I can say I rose to the occasion on this set, and it made me better. I also probably lost some brain cells because more than half of that set was under water holding my breath. Not to mention I saw little elves sitting on the bottom of the pool playing backgammon.

My last bit of advice is this: Avoid patterns. Since kindergarten we have been taught patterns. Patterns are pretty, and to us they always look good on paper. While it’s okay to pattern some things, repeating patterns on a regular basis, especially the same pattern, and LADDERS, are what eat away at us mentally as swimmers. Everything doesn’t always have to be in order, or "make sense." Spontaneity is a good thing. Throw random things into workouts like a timed hundred swim, or three 50s fly all out. Something that no one expects. Surprises like these are entertaining. Even though most people hate being surprised, they quickly get over it.

This, of course, is not all that we do. But these are the things I like to do because they are interesting to me. I still do my fair share of boring stuff, grudgingly. But I also think by doing those "blah" workouts, the fun creative ones become even more fun. I think swimmers will respond better if coaches make more of an effort to be creative and entertaining in workouts. If all else fails, play games. I know some elves who are really good at backgammon.