You never know when it’s coming. It could be in the middle of a set of 100s. It could be on the first pushoff of the fin set you’ve been looking forward to all practice. It might be when you’re airborne on your fastest block start of the day. It could even come when you’re hanging on the wall listening to Coach. More likely, it will come at the end of practice when you’re FINALLY catching up with Suzie — thinking YES, I’ve got her, when — bam! 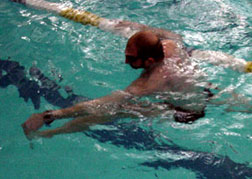 If you’re lucky, the cramp will be just a mild twinge and you can swim through it by mentally isolating and relaxing the involved muscle. If you’re unlucky, and your cramp is the major-league variety — the kind that makes your calf, thigh or, foot feel like a block of petrified wood –you stop in mid stroke and hope the lifeguard is awake.

Muscle cramps can range from mildly annoying to life threatening. I once got a total-seize-up cramp in both thighs simultaneously while practicing my start.   I thought I was a goner because I couldn’t move my legs to get to the lane line to hold on. My head was going under in 12 feet of water when Coach finally noticed my distress and dove in. Now, as a Coach, I take it very seriously when one of my swimmers pulls up with a cramp.

What Is a Cramp? 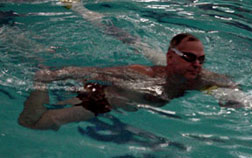 Basically, it’s when one or more of your muscles contracts WAY too hard even though you didn’t tell it to — and then won’t relax even when you scream at it to let go. It’s an INVOLUNTARY contraction that won’t relax.

Cramps can attack all or part of a muscle, or several muscles in a group. The most commonly affected muscles for swimmers are the calf muscles (back of the lower leg), the hamstrings (back of the upper leg), and the quadriceps (front of the upper leg). Because we point our toes a lot and wear flippers, swimmers are also prone to cramps in the bottoms of the feet. Swimmers can get side stitches, too. Cramps can last a few seconds or several long minutes.

What Causes a Cramp and How Can You Prevent Them?
Lots of things can cause cramps, but fortunately there are ways to avoid them. Here are some of the common causes — and some easy solutions.

Overexertion. The working muscles don’t get enough oxygen, which causes a buildup of lactic acid. When the buildup reaches critical mass, the muscle reacts by going into spasm. This is why cramps are common at the end of practice, when your muscles are fatigued.

Inadequate stretching and warmup prior to exercise. In order to produce movement, muscles need to contract and expand. A good stretching program lengthens and loosens your muscles so that they can contract more vigorously. It also teaches the muscles how to ‘behave’ without cramping, i.e., how to contract — and then relax. A good warmup ensures that blood is flowing to all of your muscles prior to the really vigorous part of practice. 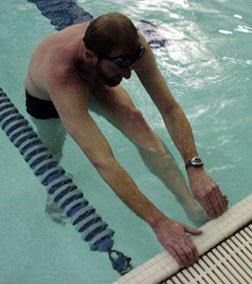 The solution?  Try starting each practice with 10 minutes of "social stretching," followed by a 200-yard "stretch swim," which is a mix of sculling and arm circles.   Follow this with a warmup like the one that Dave Denniston used to do with coach Dave Salo.    It’s 1 X 400, 4 X 100, and 4 X 50. The 400 is a long fluid swim. The 100s are a mix of drills and focused swimming. The 50s utilize cycle bursts to get the arms and legs going without too much stress.  So try to get to practice early for some on-deck stretching, and make sure you do the entire warmup — at least 400 yards before you notch it up.

Loss of fluids and electrolytes. Electrolytes are minerals such as calcium, sodium, magnesium, and potassium. It’s electrolytes that control the contraction and relaxation of our muscles, and allow you to do things like blink your eyes, wiggle your toes, and perform all the motions of swimming. In general, sodium begins a muscle’s contraction cycle, while magnesium or potassium begin the relaxation cycle. When you get a muscle cramp, it’s often because you don’t have enough magnesium or potassium in your blood stream to cause the muscles to relax.

When you sweat, you lose not just water but also electrolytes. If you lose too many electrolytes, your muscles can go haywire and start to cramp.

The solution? Stay hydrated! And don’t wait until practice to pour in the fluids. You need them before, during, and after — especially if it’s hot and humid (or dry and cold) and especially if you’re a kid, because kids get dehydrated much faster than adults. By the time your brain registers that you’re thirsty, you’re already dehydrated. Drink plenty of water throughout the day and don’t chug it down.  Chugging a lot of water can cause cramps faster than not drinking water at all.

How much should you drink? It depends on your body size and metabolism, but a good rule of thumb is that if your urine is almost colorless, you’re well hydrated. If it’s yellow or orange or dark, you need to up your intake. During practice, you should drink 4 to 8 ounces of water or sports drink every 15 to 20 minutes. Water works fine for practices up to an hour long. Longer than that, and you may want to switch to a sports drink or watered-down sports drink to replace lost electrolytes. After practice, you should keep drinking — 16 to 24 ounces for every pound of weight lost during training. And don’t forget to drink during swim meets! According to Jordan Metzl, M.D., author of The Young Athlete (New York: Little, Brown and Company, 2002), even slight dehydration can impair athletic performance, and as little as 5 percent dehydration can cause cramps.

Another good trick to prevent cramps is to eat a banana every day. Bananas are rich in potassium and magnesium.

Pushing off too hard, especially during warmup. Glenn has had some scary cramps in his career, so he does everything he can to avoid them. One of his tricks is to go easy on his pushoffs during warmup. That’s not to say he doesn’t get into perfect streamline, but he doesn’t QUITE extend and point his toes. He starts doing this gradually, during the regular part of practice. By that time, his calf and foot muscles are warmed up and ready to go. If he gets a cramp in the arch of his foot during a main set, his solution is to push off the wall again. In other words, he keeps going, gets to the other end as fast as possible, and uses the wall to stretch out the cramp.

So for a foot cramp you just keep going. What about one of those debilitating calf cramps?   One of the best solutions is to stop, straighten your leg in a lock-knee position, and point the toes UPWARD until the cramp lets go. Sometimes you have to use your hands to pull up on your toes. When you start swimming again, use a relaxed kick to prevent a return episode. If you get a severe thigh cramp, pulling the knee to the chest will usually relieve it.

Overkicking with fins. Fins force you to point your toes, which contracts the muscles in the soles of your feet. If you’re not used to pointing your toes, you may get a cramp from fins. Also, if you try to kick TOO HARD or too fast with fins, you may get a cramp. When you first put on fins, start EASY, until your feet get used to being pointed, and until your calves and thighs get used to the added weight and resistance. Also make sure you have the right size fin. Too small or too large can both cause cramping.

Cramps can ruin a practice or a meet, so you want to do everything to avoid them. The easiest solution is to drink during the day and during practice, eat bananas, stretch before you get in, warm up gradually (and completely) and then — GO SWIM!