When you’re ready to start practicing starts, you have to make some decisions. The first decision is whether you’re going to learn a standard (two-feet-forward) start, or a track start.

I believe it’s best to learn both types of starts, and then you’ll be able to determine which is best for you. Nowadays, younger swimmers are usually taught the track start, and the standard start is avoided all together. My opinion is that the track start should be taught a bit later, and that younger swimmers should start with the standard start. 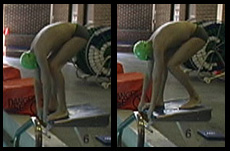 Iï¿½ve worked quite a bit with the young swimmer in this weekï¿½s video and photos. We started with the standard start ï¿½ and focus on it more than on the track start — simply because I feel it should allow him to land in the water with more momentum for his underwater pull in breaststroke (his best stroke).

To determine which start is the best for you, try what we did here, which is to set up a video camera on a tripod, and film a few starts of each type. Although this isn’t the clearest video we’ve put on this website, this video clip told me enough about this swimmer to CHANGE my advice to him. Hopefully you’ll be able to see why. 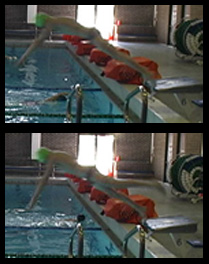 Practicing various types of starts means you’ll have explored all avenues toward the perfect start. If you learn only one type of start, you’ll never really know which is the best for you.

1. The simple difference between the standard start (left) and track start (right) is the placement of the feet.

The head will usually be held a little higher on the track start, although, this will vary by each athlete.

The track start usually allows the swimmer a quicker start, since it positions the swimmer in a stance that’s easier to uncoil.

3. As you can also see from these pictures, neither start gives a huge advantage or disadvantage. 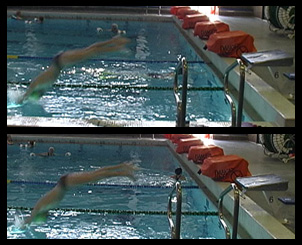 The fine points involve MUCH practice, and much study. Doing things like timing yourself from the gun, to the flags… then to the half-way point… then to the end.

You may wonder why I’m suggesting to this swimmer that he change from his standard start to a track start. It’s about consistency. In the first overlayed video clip, you’ll see that there is one image that is lagging behind the other. In the second slow-motion clip, you’ll see very little difference between the starts.

In doing this further analysis, we’ve discovered that on the FIRST MOVE, sometimes he gets stuck getting off the blocks using the standard start, while on the track start he is consistently quicker, or just as quick. Neither start gives him a huge advantage in height, or distance, off the blocks, so quickness becomes the determining factor.

You can always search through our collection of “Drill of the Week“. [embedyt] //www.youtube.com/embed?layout=gallery&listType=playlist&list=UUPpmXSYfseQrcSdB0PTgw_w[/embedyt]

All Strokes – Reading the Clock

Coaches will understand the importance of this week’s video, especially when working with younger swimmers. Why do it: Learning how … READ

What’s old is new again.  Back in the “old days,” breaststrokers had to keep the legs firm, rigid, and straight … READ