When swimming breaststroke, many swimmers work hard to set up a BIG kick. They like the feeling of surging and shooting forward. What they may not realize, however, is that if you feel a surge in your stroke, itï¿½s probably because you slowed down a lot just BEFORE the surge… and what youï¿½re

feeling is nothing more than acceleration. The question that needs to be asked now is: Is it better to accelerate during each stroke (which means some deceleration has occurred) or to maintain a constant speed. I’m going with the second option here, since we all know how tough it is to accelerate in the water.

trying to set up for a HUGE kick, most people bring their legs up too wide, creating tremendous resistance, and slowing them down. By using a common tool, a pull buoy, you can quickly give yourself the feeling of a narrow kick.

If you can sneak your legs up to set up for your kick, you’ll create less resistance and maintain a higher average speed throughout your stroke cycle.By trying to set up for a HUGE kick, most people bring their legs up too wide, creating tremendous resistance, and slowing them down. By using a common tool, a pull buoy, you can quickly give yourself the feeling of a narrow kick. 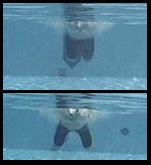 1. Place a pull-buoy between your legs just like you normally would. Start swimming breaststroke with a full breaststroke kick.

2. After a few kicks, simply allow the pull-buoy to slip out. Your goal at this point is to keep the kick as narrow as it was while you were holding the pull-buoy.

3. Really think about how you are pulling up your feet. After you drop the pull-buoy, you may feel you have to over-exaggerate to maintain that narrow feeling. Your legs will normally start to widen again, which they should a bit, just be careful not to fall back into the old habit, as show below.

You may find it tough to keep your feet under water during this exercise. In trying to keep your feet under the surface, youï¿½ll become aware of your hips, and that you should be drawing them forward rather than tucking up your legs. With the added buoyancy of the pull-buoy, you will find that curling your hips under your body starts the recovery action of your legs.

You can also add PDFs to this mix to heighten your awareness of two critical moments in your stroke — the drawing action of the hips, and the point at which your feet point out and hook into the water.

Of course, if keeping your legs this close together with the pull-buoy hurts your knees, then stop doing it, or don’t bring your legs up so high.